The CEO of JPMorgan, Jamie Dimon is reported to have bashed cryptocurrencies again referring to them as “scam.” Bloomberg reported on Sunday 5 that Dimon said that he does not have “interest” in the virtual currencies.

He said this while speaking at the Aspen Institute’s 25th Annual Summer Celebration Gala, which was held on Saturday 4. I his speech Dimon shared his opinions on the outlook of the economy of the United States. Mainstream press alongside other respected economic sources redistributed Jamie Dimon’s message online. Bloomberg reported that Dimon “suggested governments may move to shut down the currencies [cryptocurrency], because of an inability to control them.”

Jamie Dimon’s relation with cryptocurrencies and especially Bitcoin has been a shaky one since his statements in September 2017. He referred to Bitcoin as a “fraud” but later said that he “regretted” the terms he used. Since then Dimon has been refusing to comment on Bitcoin and cryptocurrencies.

Bitcoin price extended the declines below the support level at $6,900. Although it is currently trading above this level, it has recovered from a dip supported at $6,880. There is a bullish trend at the time of writing, besides the technical indicators are showing bullish signals for the short-term. The stochastic is making its way out of the oversold region while the moving average gap is closing in on the 15-minutes timeframe chart. Resistance will be encountered at $6,930, moreover, there are a couple of critical supply zones at$6,940 and $6,980. 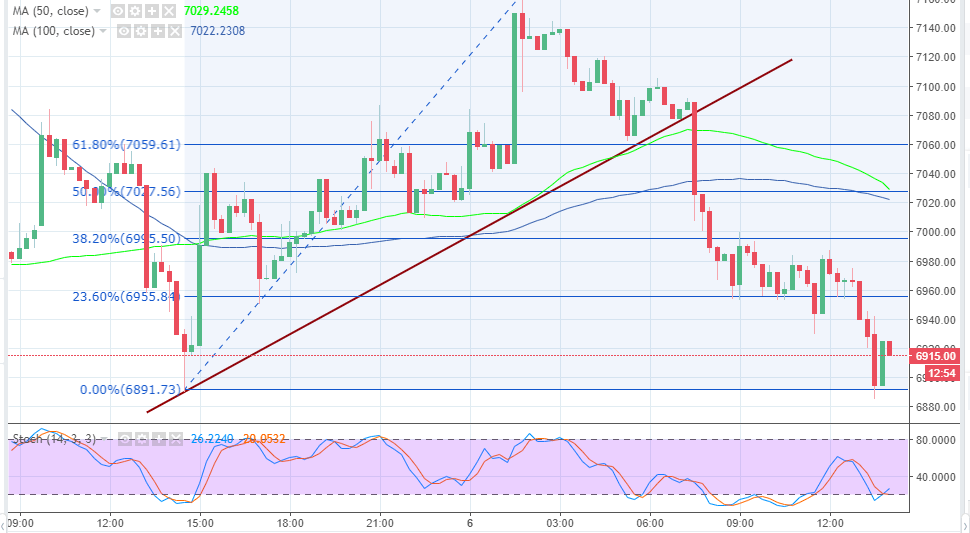