The odds favor a Trudeau reelection but not a Liberal majority, according to prices on blockchain-based Polymarket and centralized platform PredictIt.

Pollsters and pundits see a tight race; Canadian Broadcasting Company polls show Trudeau at 31.7% and Conservative challenger Erin O’Toole at 31.2%, as of time of writing on Friday.

Yet prediction markets, which require bettors to put “skin in the game” by having cash on the line and are thus considered a more accurate indicator of how things may turn out, show a very different outcome. Investors in these markets are betting strongly that Justin Trudeau will keep his job as prime minister. How the next Liberal government will be formed is a slightly different matter.

The cryptocurrency community has begun to embrace prediction markets as a way to sort the signal from noise on questions it cares about. For example, on Polymarket, investors can bet on whether Amazon will accept bitcoin payments in the U.S. before next year, while Hedgehog Markets allows users to wager on various metrics tracking the Solana blockchain’s growth.

The situation in the Great White North, however, is somewhat more nuanced.

How bets are shaping up

On the question of “Will the Liberal Party win a majority in the 2021 Canadian federal election?” Polymarket, one of several blockchain-based betting venues, has “no” trading at 84 cents, while yes is at a mere 16 cents. The two were trading at about even a week after the election was called. A slightly different question, “Will the Liberal Party win the most seats in the 2021 Canadian federal election?” has “yes” at $0.78 and “no” at $0.22. That gap widened from two-thirds saying yes back in August. Thus, the market is saying that while the Liberals will win more seats than any other party, it won’t be enough to make a majority.

Polymarket runs on Polygon, a sidechain, or parallel network, to the Ethereum blockchain, and the bets are managed by software programs known as smart contracts. The advantage of this setup is that an open system can allow “anyone, anywhere to create markets on anything,” as Polymarket founder Shayne Coplan puts it. But it’s hard to use. Bets are denominated in USDC, and the gas, or on-chain computation fees, to deposit and withdraw the dollar-pegged stablecoin to and from Polymarket can cost more than the amount being wagered.

Entry-level users may prefer PredictIt, where you just need a credit card to trade, although since it is a centralized platform, management will always decide what questions are wagered on.

There, Trudeau is trading at 87 cents (in U.S. dollars) on the question “Who will be the prime minister of Canada on Oct. 31?” as of Friday morning, crushing O’Toole’s 11 cents.

Bloc Québécois’ Yves Blanchet, National Democratic Party’s (NDP) Jagmeet Singh and Green Party’s Annamie Paul are each trading at one cent, as are Finance Minister Chrystia Freeland and Conservative Party Deputy Leader Candice Bergen (not to be confused with the American actress). The latter two are not candidates, but bettors are taking a long-shot wager that something may go kooky in forming a government because, hey, it’s Ottawa.

While that may predict if Trudeau stays prime minister, it doesn’t predict how he does it. Betting markets see the Liberals failing to win a majority in the House Commons, thus forcing Trudeau to form a minority government once more. Trudeau called the snap election on Aug. 15, after his polling numbers were favorable compared to O’Toole’s, in hopes of gaining a majority but that dream that now appears to be elusive yet again.

Liberals currently hold 155 out of 338 seats. The last time it held a majority was in 2015, when Trudeau – just two years after winning the party’s leadership contest – led the Liberals to 184-seat victory against former Prime Minister Stephen Harper’s Conservative Party.

Poll averages show Liberals going down to 150 seats this time around, while the Conservatives may pick up a few seats, with their averages coming it at 130 versus its 121 currently in parliament. Therefore, it looks most likely that the Liberals will form the next government since they will likely be coming in with more seats than the Conservatives. The NDP is expected to gain 14 seats to bring them up to 38 while the Bloc Québécois is averaging 29 seats in the poll, three fewer than its current total.

The right-leaning People’s Party of Canada (PPC), barely shows up in polls. Its leader, Maxime Bernier, recently came out as a full-throated supporter of bitcoin Wednesday. “Many people are asking if I support #Bitcoin and cryptos. Of course I do!,” he tweeted. “I hate how central banks are destroying our money and economy. I’m more of an old-fashioned gold & silver fan, but cryptos are another new and innovative way to counter this that should be encouraged.”

Canada was supposed to be the perfect country, the old maxim goes: It was going to have French culture, American ingenuity and British politics. Unfortunately, it ended up with American culture, British ingenuity and French politics.

The world will once again know how accurate that adage is as Canada braces itself for Monday’s election – and the markets are putting up money on what the results will be. 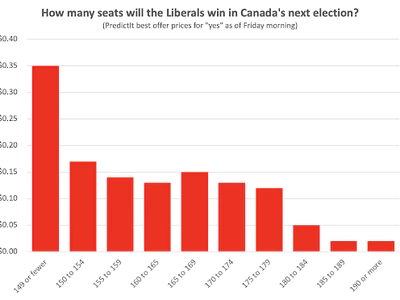 Thus 93 cents buys the total bet that Liberals will gain at least 150 seats compared to 35 cents for any amount below that. Each individual bet pays $1 if it wins, $0 if it loses.

Another minority government would follow a recent trend in the country, according to journalist-turned-historian Craig Baird, the host of several podcasts such as Canada History Ehx and the incredibly addictive From John to Justin, which examines every prime minister and election since the country’s founding in 1867.

This election echoes another previous election involving another Trudeau, said Baird. He sees parallels between Justin Trudeau’s current election with that of his father (no, not Fidel Castro) Pierre, who sought a second term as prime minister in 1972 (several months after Justin was born). That turned out to be a tight win.

“Pierre Trudeau had won a majority government in 1968 and called an election after four years,” said Baird. “That election turned out to be incredibly close. The Liberals and Progressive Conservatives [forerunners of today’s Conservative Party] polled very close. In the end, the Liberals won by only two seats, a result that could happen again.”

Voters were at first irritated that the election was called in the middle of a pandemic, hence Trudeau and the Liberals initial tough polling numbers and constant barbs by his opponents during the televised debates. Given the extra precautions required, the election will be the country’s most expensive, costing about C$610 million compared to 2019′s C$502 million.

Voters, though, seemed to have gotten over it, according to Baird. “Time heals all wounds, the same can be applied to annoyance over an election call,” he said.

That doesn’t mean COVID-19 isn’t a factor in the election in other ways. While campaigning, Trudeau has been met at several campaign stops by anti-restriction mandates and anti-vaccine protestors, even leading to one rally’s cancelation. Several days ago, demonstrators pelted the prime minister with rocks. Trudeau has occasionally shouted back at protestors, including one who recently insulted his wife, Sophie.

That’s a relatively mild reaction compared to what one of his predecessors did in 1996.

That year, then Prime Minister Jean Chrétien was surrounded by demonstrators in Hull, Quebec, angry with his cuts to unemployment insurance. Chrétien grabbed one of the protestors by the neck and threw him to the ground, chipping his teeth. The incident, known as the “Shawinigan Handshake,” (named for Chrétien’s hometown) is now something of legend, and the perpetrator even visited the brewer of a beer called Shawinigan Handshake back in 2012.

For Baird, Trudeau pushing back against protestors has helped him in the polls. “People want a strong leader and someone who isn’t afraid to talk back to someone who is saying something about the leader’s wife,” he said. “People also forget that after the Shawinigan Handshake, Chretien’s poll numbers actually went way up. I don’t think 25 years from now we will be talking about Trudeau’s handling of protestors though. We may talk about the gravel thrown at him, but this wasn’t a Shawinigan Handshake or his father saying, ‘Just watch me’ to a reporter during the October Crisis of 1970.”

In Canada’s federal elections, all things are regional

While about half the population of Canada lives within three hours’ drive of Upstate New York, the second-largest country on earth is quite regionalized.

Alberta, long a Conservative bastion, is currently struggling with a resurgence of COVID-19. That has the province’s premier, Jason Kenney, on the defensive for his relatively hands-off approach to combating the virus’ spread. While refusing to criticize fellow Conservative Kenney, O’Toole isn’t exactly exalting his management of the situation. Kenney’s handling of the pandemic may come into play in the federal election on Monday.

“Right now, [Alberta’s results are] forecasted to be two to three seats for the Liberals, one to two for the NDP and the rest [29 to 31] Conservative,” said Baird, who lives in the province. “Jason Kenney has been absent for most of the campaign because he is a detriment to the Conservatives. I never thought I would see a Prime Minister named Trudeau polling better than the Conservative premier, but that happened this year. O’Toole even came to Alberta and did not campaign with Kenney, which says a lot. I wouldn’t be surprised if the Liberals or NDP picked up more seats in Alberta.”

Meanwhile, Quebec may see a last-minute resurgence for the separatist party, Bloc Québécois. That could take a bite out of potential Liberal wins, though it’s still too early to know.

Last week, at the start of a televised debate, moderator Shachi Kurl of the Angus Reid Institute, asked the Bloc’s Blanchet why he supported Québéc’s Bill 21 and the proposed Bill 96, which limits the use of religious symbols by government officials and which promises to promote the French language, respectively. Kurl’s characterization of the bills as “discriminatory” in the question has galvanized some Québéc voters who would have otherwise voted for another party, to change their vote in favor of the Bloc. While unpopular in English-speaking Canada, the two bills have public support in the province in general.

Québéc Premier François Legault, who is fairly popular with constituents, has made a tantamount, though not outright, endorsement of O’Toole.

Both the polls and the markets seem to be on the mark, according to Baird. “I think the predictions are pretty spot on,” he said, but with a caveat: “Sometimes they can be wrong, like in 2004 when the Conservatives were forecasted to have a minority government, but the Liberals won a minority government instead.”

Baird said that if he were to bet, he put money down on Trudeau having a minority government.

“This election, I think he will have 160,” he said. “I think he will pick up extra seats in the west and Quebec, and the PPC will eat into the votes for the Conservatives. Separatist parties like the Maverick Party in Alberta will also eat into their votes.”

The world – and the markets – will anxiously await the results to see if that turns out to be the case.