Whenever someone thinks about Cryptocurrencies, they usually quickly assume Bitcoin. They can’t really be faulted as it’s the largest and most expensive Cryptocurrency. With that being said, it hasn’t been trading as it usually does, as we’ve grown accustomed to the volatility instrument to set All-Time Highs (ATH) every other day. The instrument’s bullish momentum was not letting up as it continued to move higher reaching the most recent ATH at $42,000.

Since that move, Bitcoin hasn’t been setting any ATH, in fact, that privilege has been taken by none-other than Ethereum. The smart-token has been moving higher and higher since Tuesday of last week, as it battled against the former January’s high at $1,350. The Cryptocurrency was able to spike to a new ATH reaching $1,440 as per Coinbase.

Ether has been moving in an upward channel (as can be seen in the below graph). Being confined to this channel has given ETH the needed bullish momentum to break above the previous high and continued to move even higher. As of this writing, the instrument is trading right at the middle boundary of the mentioned channel around $1,370. Even though the instrument has fallen from the recorded ATH, the bullish presence remains there with plenty of support levels to protect any kind of downside pressure. 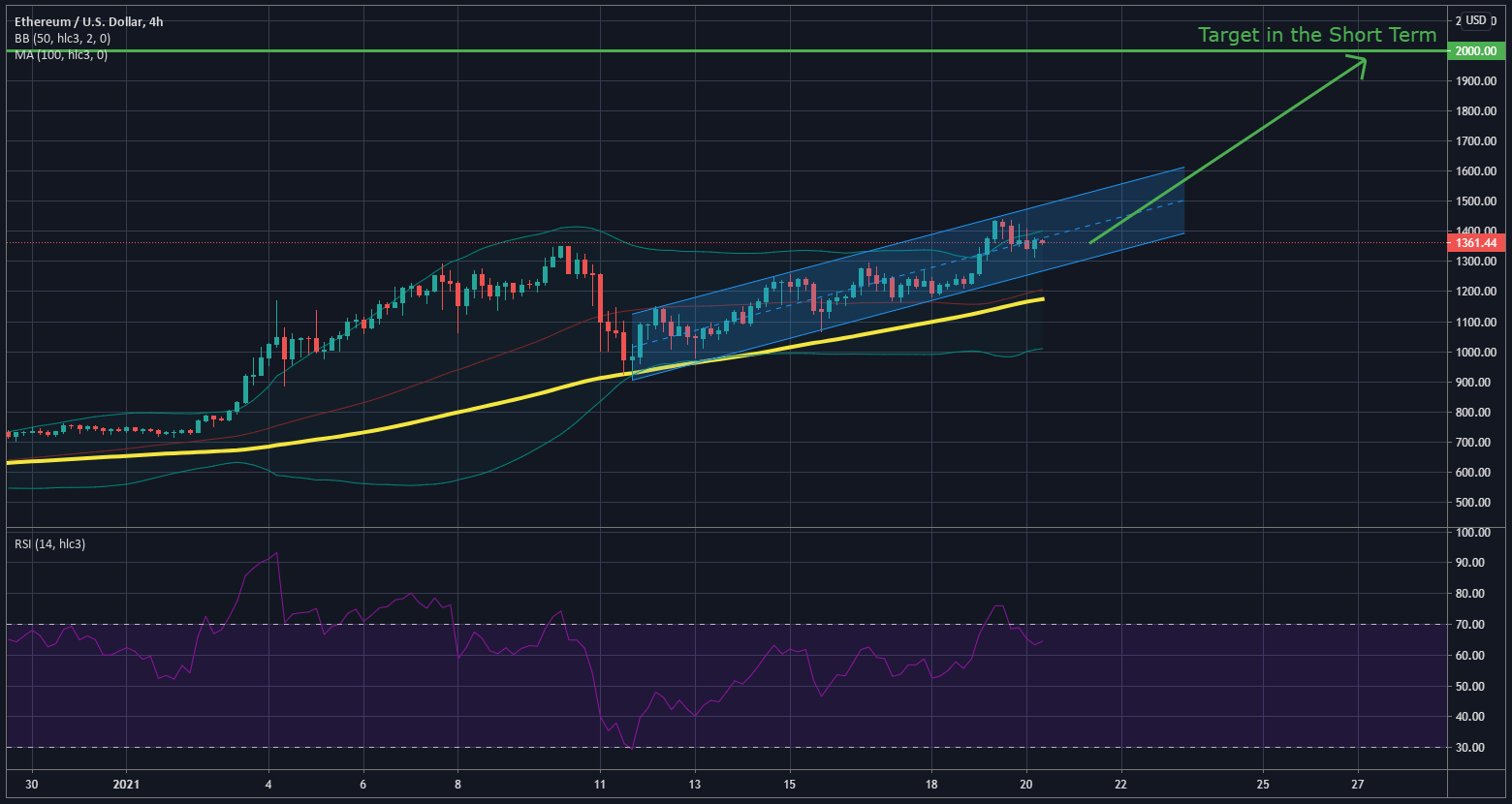 Looking into the RSI (Relative Strength Index), we can notice that the instrument seems to be trading on the topside without really entering into the overbought territory. This suggests that there is still room for growth and another opportunity to set an ATH, possibly even reaching the $2,000 which happens to be a target for a lot of Bull traders out there.

One of the reasons for Ethereum’s sudden rise is because of the CME’s futures on the Cryptocurrency, meaning that many more institutions are adopting this instrument and that would mean more regulation on Cryptocurrencies as a whole.

Many analysts are of the opinion that this new breakout could signal the beginning of Alt-season, as we see more and more Altcoins moving higher. Looking at the open interest on the Ethereum futures, we can notice that they’ve reached levels never seen before. What this means is that investors are confident in the rally currently underway.

As per Glassnode, open interest has shot up to $4.5 billion while posting $1.1 billion in open positions on the largest Cryptocurrency exchange, Binance. 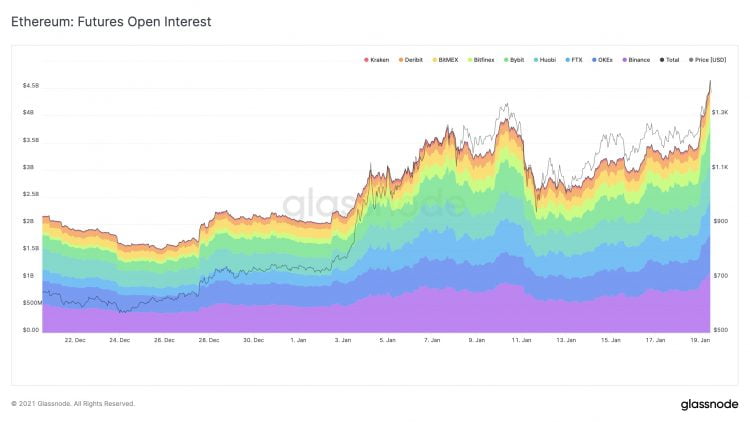 This surge also brings up suggestions of volatility. This surge expresses that volatility is running high and the uptrend may be sustainable due to forces from the fear of missing out (FOMO), especially now that Ethereum eyes $2,000 in the short term.

The mentioned movement in ETHUSD has captured many Cryptocurrency traders and they’ve started to pool in hoping to ride the wave higher, however, that doesn’t mean the interest has been translated into other pairs which involve the smart-token.

Take ETHBTC, the pair hasn’t been mirroring the movement in ETHUSD, one would actually say that the instrument has been moving lower. This has to do with power that Bitcoin possesses over the entire Cryptocurrency market. I’ve seen this kind of divergence happen countless times in the Fiat currency market, and the same reasons that apply there, can be applied here. 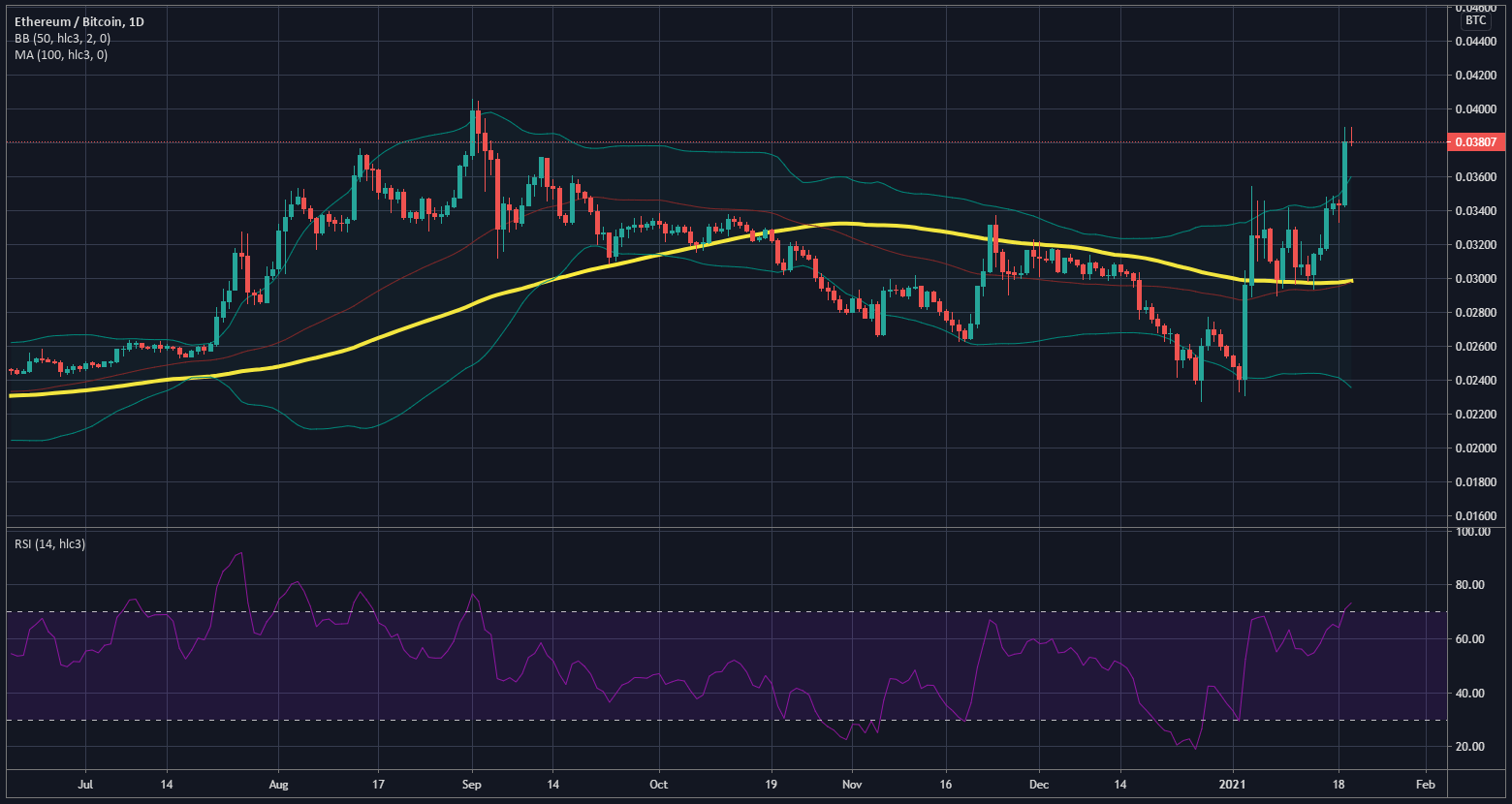 It is clear that the current trajectory of this instrument is higher, this is due to the fact that Ethereum is moving higher, breaking through ATH, which was Bitcoin’s thing, while Bitcoin seems to be struggling to continue moving higher. This has translated into the ETH gaining some power over Bitcoin, allowing ETH to post some gains against BTC.

This power might not last due to two factors. The first has to do with the close to overbought condition that ETHUSD faces, meaning that there could be a pullback in that instrument which might translate into a move lower in ETHBTC. The second has to do with the RSI which also prints in the overbought zone implying that there is going to be a drop in the currency, meaning less demand for ETH, more demand for BTC and that translates into a pullback in ETHUSD and a bounce in BTCUSD.