The theoretical deflationary properties of Ethereum’s London upgrade last week have already been seen in action on the blockchain with almost 800 "deflationary blocks" produced.

A spike in the Ethereum transaction fee burn rate has resulted in at least two hours when the supply was deflationary. The network has come under heavy load over the past couple of days which has resulted in a lot more gas being burnt.

Around four hours ago (as of 22.00 UTC), the ‘ETH Burn Bot’ recorded an instance when 545 ETH was burnt within a one-hour period. With Ethereum issuance reported at 532 ETH per hour, it resulted in the asset seeing deflation of minus 13 ETH for that brief period.

A larger deflationary burn was detected by the ETH Burn Bot a couple of hours later in which 945 tokens were burnt within the hour resulting in a temporary negative issuance of -417 ETH. It calculated this as an annualized deflation rate of -3.12%.

When the amount of ETH burned is greater than the mining reward, deflationary blocks are produced and the supply temporarily decreases. This has been observed on a tracker from advisory firm Carbono which is currently reporting that there have been 791 deflationary blocks so far, which it defines as blocks where the burnt fee exceeded the mined ETH. 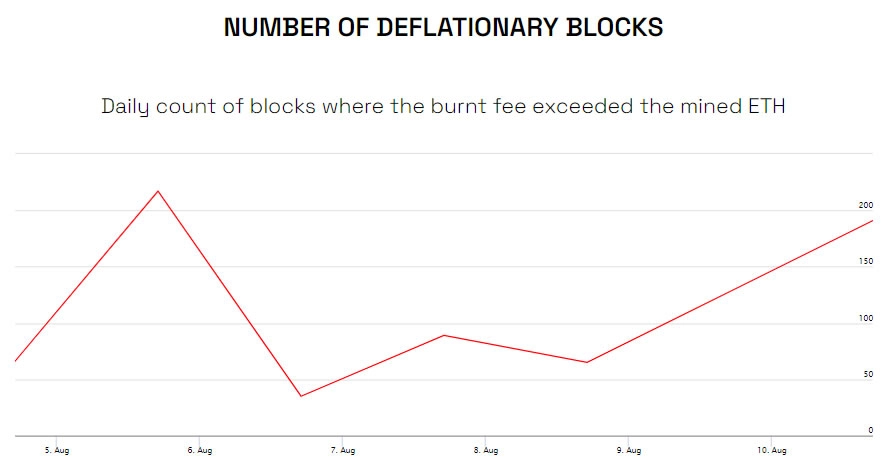 When the London hard fork was deployed on August 5, it introduced the highly anticipated EIP-1559 upgrade that adjusted the transaction fee calculation system. Part of that adjustment introduced a mechanism that burns a portion of the base fees collected.

According to ultrasound money which tracks the amount burnt, 25,600 ETH has been burnt at the time of writing. At current prices, this equates to around $80 million in just under a week.

The Ethereum economy is not expected to see sustained deflation until the fee burning is combined with the reduction in block reward issuance as a result of the merge to proof-of-stake at some stage in 2022.

The news is not all good for Ethereum users however, as gas prices have increased again. According to Bitinfocharts, the average transaction price has climbed to $20 from a low of around $4 in late July. Etherscan’s gas tracker is reporting as much as $28.60 for a token swap on Uniswap.

The surge in demand for Ethereum blockspace has been driven by NFTs with the OpenSea marketplace, Gala Games’ Vox, and Axie Infinity all in the top 4 for gas burning with a combined total of 2,200 ETH, or $7 million burned so far.