Ethereum price is still exploring late last week lows above $420. The cryptocurrency ignored the support at $444 - $440 and another weak support at $430 only to find another anchor at $425. The buyers entered at this point pulling the price back above $430, however, it is an up and down battled between with the sellers. ETH/USD seems to be making intraday consolidation above $430.

The digital asset is also changing inside a contracting triangle as observed in the 15’ chart. This could also mean that an upside breakout is in the pipeline and we could see Ethereum price attacking the selling pressure at the 61.8% Fibonacci retracement level with last swing high at $478 and a $421.5 low around $444 - $440 (broken support).

Momentum indicators on the same chart point towards bearish signals in the medium-term. For instance, the RSI is at 57% and heading downwards, besides the gap between the 50 SMA and the 100 SMA is increasing to confirm the sellers’ influence. The support at $430 will continue to hold in the short-term, but extended declines will be stopped at $425 and $420 respectively.

Ethereum has a market capitalization of $43 billion and this makes it the second largest asset in the market. Its trading volume has dropped significantly from $4 billion on June 26 to $1.3 billion at the close of the session yesterday. The weekly analysis of the top cryptocurrencies by Huobi indicates a drop in the number of Ethereum active addresses. The insight constructed from the companies Big Data system state that:

“The number of active addresses on Ethereum has continued to decline in three consecutive weeks, down by 6.6% to 1.56 million from 167.5 million in a week. There is a 25% increase in overall transaction fee on Ethereum network this week from 13,000 to 15,000 ETH in a week.” 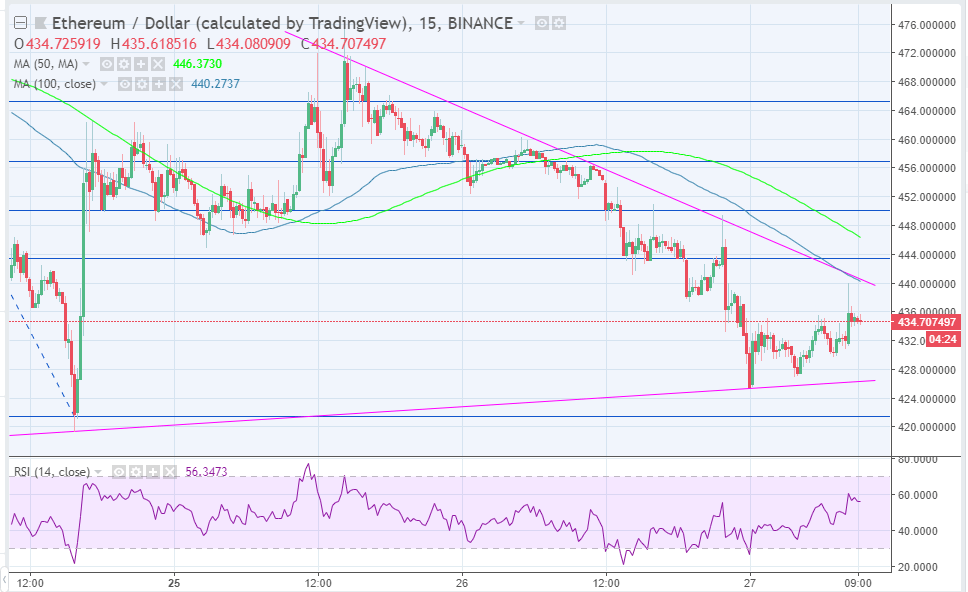