Ether (ETH) prices reclaimed $2,000 on Monday, increasing expectations that the latest rebound would serve as a cue for further upside moves based on bullish fundamental and technical outlooks.

The world’s second-largest cryptocurrency by market capitalization surged up to 4.96% to $2,083 ahead of the London opening bell. Its gains appeared as a part of an overall upside correction that started late Saturday. At that time, bids for ETH/USD had fallen to as low as $1,717.41.

On Sunday, the pair closed the session at $1,984.71, following it up with another spike above $2,000 on Monday, a level that traders consider as a backstop for further bullish momentum in the Ethereum market.

“After the dip, ETH is in consolidation and looks ready for the break higher. With the only pivot in the way, the triple top around $2,045 is set as the next price target.” 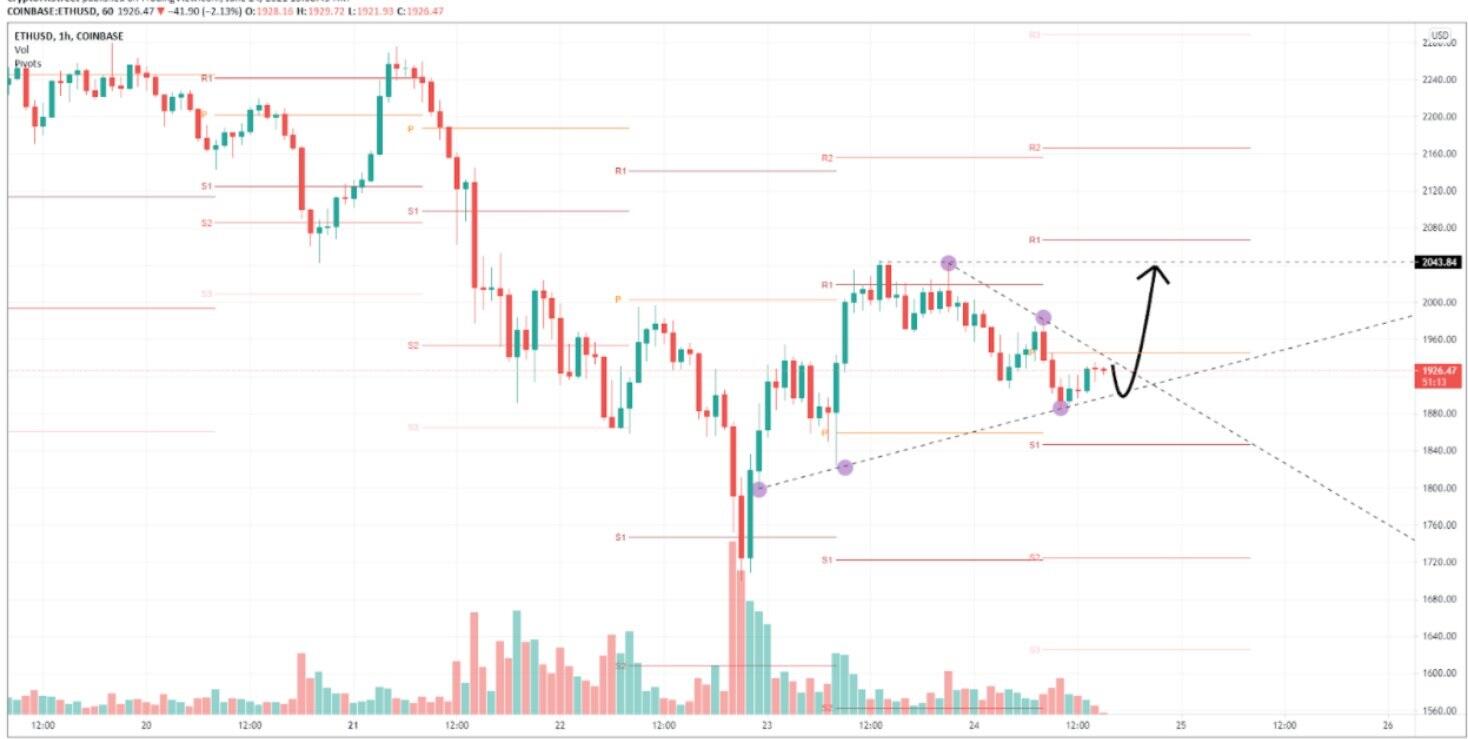 Market analyst Edward “Teddy” Cleps also highlighted a bullish scenario for Ether as he referred to his custom-made “secret EMA cloud.” The analyst refers to the said exponential moving average indicator periodically to identify potential entry and exit levels in a trade.

Ether prices pushed higher also as it maintained its positive correlation with Bitcoin.

Bulls took encouragement from Bitcoin’s ability to sustain its upside bias above a closely watched support level of $30,000. The flagship cryptocurrency climbed to an intraday high of $35,301 ahead of the London session Monday. Meanwhile, its latest move upside prompted other correlated assets to rise in tandem, including Ether.

“We’re seeing the $30,000 level on Bitcoin being defended quite well with a number of tests at that level over the past month,” Vijay Ayyar, head of Asia-Pacific at crypto exchange Luno, told Bloomberg.

“We saw a lot of downward pressure on prices being defended, so this looks quite bullish at this point.”

More upside tailwinds in the Ethereum market came in the wake of its major protocol upgrade in July. Dubbed as the London hard fork, the upgrade expects to transform Ethereum from an energy-intensive proof-work network to a speedier, “eco-friendly” proof-of-stake network.

The fork will introduce new Ethereum Improvement Protocols (EIP) that propose to make its fee structure cheaper and its blockchain more scalable to handle a higher number of transactions. The two issues have acted as bottlenecks for Ethereum’s adoption even as it remains the highest-utilized blockchain across the booming stablecoin and decentralized finance (DeFi) sector.

EIP-1559 also brings in the so-called “scarcity” feature to the Ethereum ecosystem, which is currently the primary bullish factor in the Bitcoin (BTC) markets. The cryptocurrency actively competes with the United States dollar to become the best hedge against inflation, thanks to its limited supply cap of 21 million units.

Unlike Bitcoin, Ether does not have a supply limit, making it less appealing as a store-of-value asset against unlimitedly printable fiat currencies. Ether’s circulating supply was 116,471,411.37 ETH at the time of publication.

EIP-1559 proposes to burn a portion of the fee collected from Ethereum users, thus introducing a mechanism to put active ETH tokens of supply for the first time since its launch.

Meanwhile, Ethereum’s transition from proof-of-work to PoS means replacing miners with validators. To become a validator on the Ethereum network, a user needs to lock at least 32 ETH in the network’s official smart contracts; that also reduces ETH’s active supply. Therefore, analysts see it as a sign of another bull run providing the demand for ETH tokens increases against a decreasing supply.

“Based on the scheduled London hardfork (EIP 1559) upgrade and the proposed migration to Ethereum 2.0, investors are bound to start backing the coin the more,” Domenic Carosa, founder and chairman of Banxa — a fiat-to-crypto gateway solution — said.

“This backing will be particularly boosted as the base fee, one of the two components of the fee structure that will be ushered in by the London upgrade, will be burned. This burning effect will limit the supply of Ether and bring an end to the infinite supply crises of Ethereum.”

The Ethereum 2.0 smart contract has attracted roughly 5.93 million ETH (worth around $11.9 billion) to this date.

Carosa added that he expects Ether to have reached $4,000–$5,000 by the end of December 2022 while raising alarm about the cryptocurrency’s short-term bias conflict.

We are neither bull nor bear, the executive told Cointelegraph, adding that more mature investors have started buying Ether near its sessional lows with a long-term holding perspective. Nevertheless, the accumulation is not aggressive enough to continue the upside run near term. 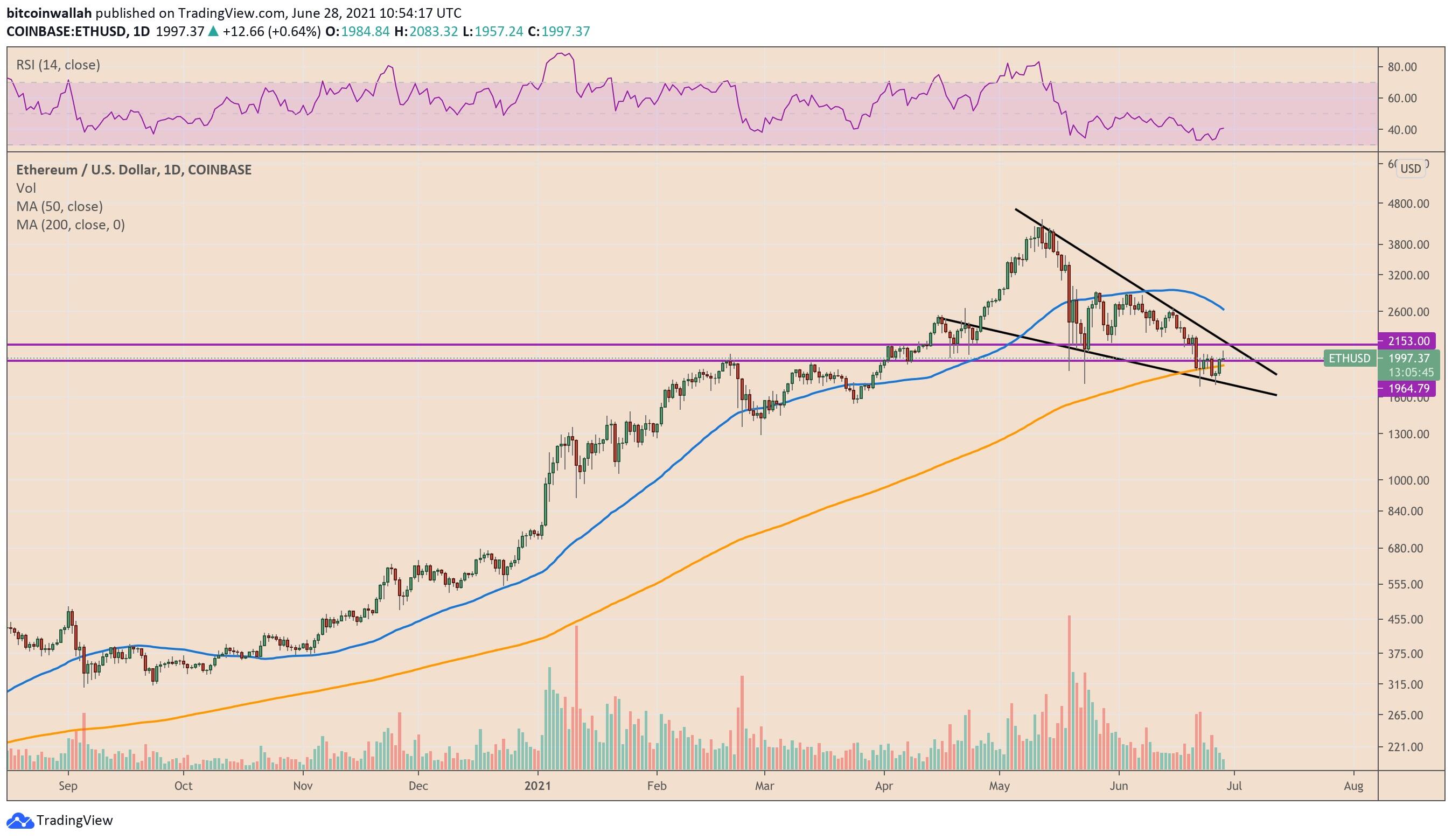 Ether was fluctuating inside a historically relevant range defined by $2,153 as interim resistance and $1,964 as interim support. At the same time, the cryptocurrency watched its 200-day simple moving average (200-day SMA; the saffron wave) as its price floor for a potential rebound move to the upside.

That puts Ether en route to $3,500 in the coming sessions, considering Wedge’s apex around $1,500 as the point of upside breakout. The pattern’s maximum height is shy of $1,800.