Ethereum is considered to be the second-largest Cryptocurrency in the market, and the first Altcoin that created the presence for other Cryptocurrencies to exist such as Litecoin and others. It was always compared to Bitcoin and there was a discussion a while back if it will ever replace BTC as the go to Cryptocurrency.

You see Ethereum’s core idea was never to excel in the market, instead it wanted to create a base for other Cryptocurrencies to shine. Ether’s ultimate goal is to provide a platform where Cryptocurrencies excel. Imagine a world where there was no Internet, then, the Internet sites such as Facebook, Amazon, Google never would have existed. Ethereum aims to become the “Internet” for Cryptocurrencies where it becomes the base for other coins to be created.

The creative mind behind Ethereum is currently working hard on ironing out the bugs that are found in the new iteration of Ethereum - Ethereum 2.0 - that is supposed to cut the costs of transactions in Ethereum by more than half. This will make using Ethereum as a payment method that much more feasible.

From a technological point of view, Bitcoin was a revolutionary idea with the introduction of Blockchain mechanics to the world of finance. It was like when the Internet was first discovered back in 1983 and was used by the U.S. Intelligence. Ethereum aims to do what Tim Berners-Lee did back in 1990 when he invented the World Wide Web and gave Internet access to the world.

If we were to make a decision on who will be the ultimate winner based on the technological aspect, Ethereum would probably win. Bitcoin has become rather stagnant in that area, not offering up anything new, while Ethereum is trying to push the envelope and evolve this market. So yeah, investing in Ethereum might be the way to go for long term investors.

That is from a Fundamental perspective, but let’s look at the Technicals for a second.

As of this writing, Ethereum is actually trading just under the $500 resistance level. This is a very important move for the Cryptocurrency as it would be the first time it reaches that level since 2018. Not to mention that breaking above that level would give the Bulls an incredible push to continue with the momentum.

However, with this level being such an important resistance, a retracement lower is not out of the question, and in fact, it could be an actuality that leads Ether back lower. The support level for such retracement is seen at the $495 level which was a previous resistance and has proven to be a worthy one. But will it also be able to act as a support? Only time can tell.

For now Ethereum is on the precipice of something big and in order for that to happen, a break above $500 is needed. When we add the current visual perspective of the RSI (Relative Strength Index) to the chart, we’d notice some divergence going on.

A couple of days ago, ETH wasn’t able to break above $495 and proceeded to correct lower in an extreme fashion marking a high on the RSI of 80. Now, the price action has broken above the $495, yet the RSI is at 76.50, indicating that a divergence is in motion. When this divergence happens, the price action is usually the one to correct and this time it will correct lower, proving that the $500 is too hard to beat at the moment. However, this analysis is based on the short term, longer perspectives are showing that there’s enough momentum for a break higher. 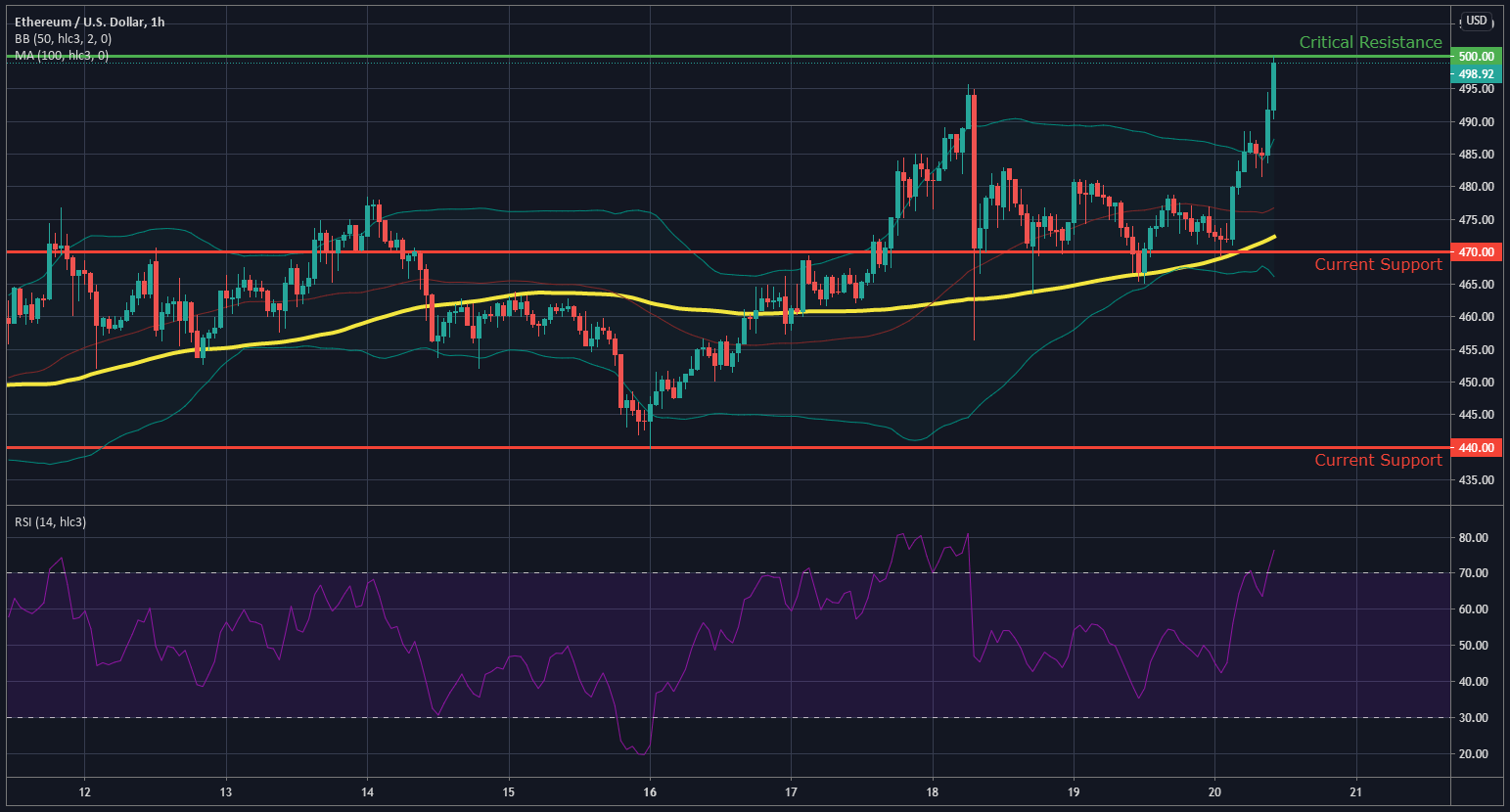 Now that we’ve tackled Ethereum alone, let’s see how the ETH/BTC pair is actually doing. It seems that this pair is on the rise because of Ethereum's sudden burst of positive momentum that is sending over the $500 level. Bitcoin is casually trading above the $18,250 resistance level as there isn’t this big movement. This is opening the chance for ETH to gain the upper hand.

When we look at the longer term trading conditions of this pair, we can directly notice the downward trend that started back at 0.03018 and seems to be continuing until now reaching 0.02630 as a low which has acted as a support for the pair and ignited the push higher. 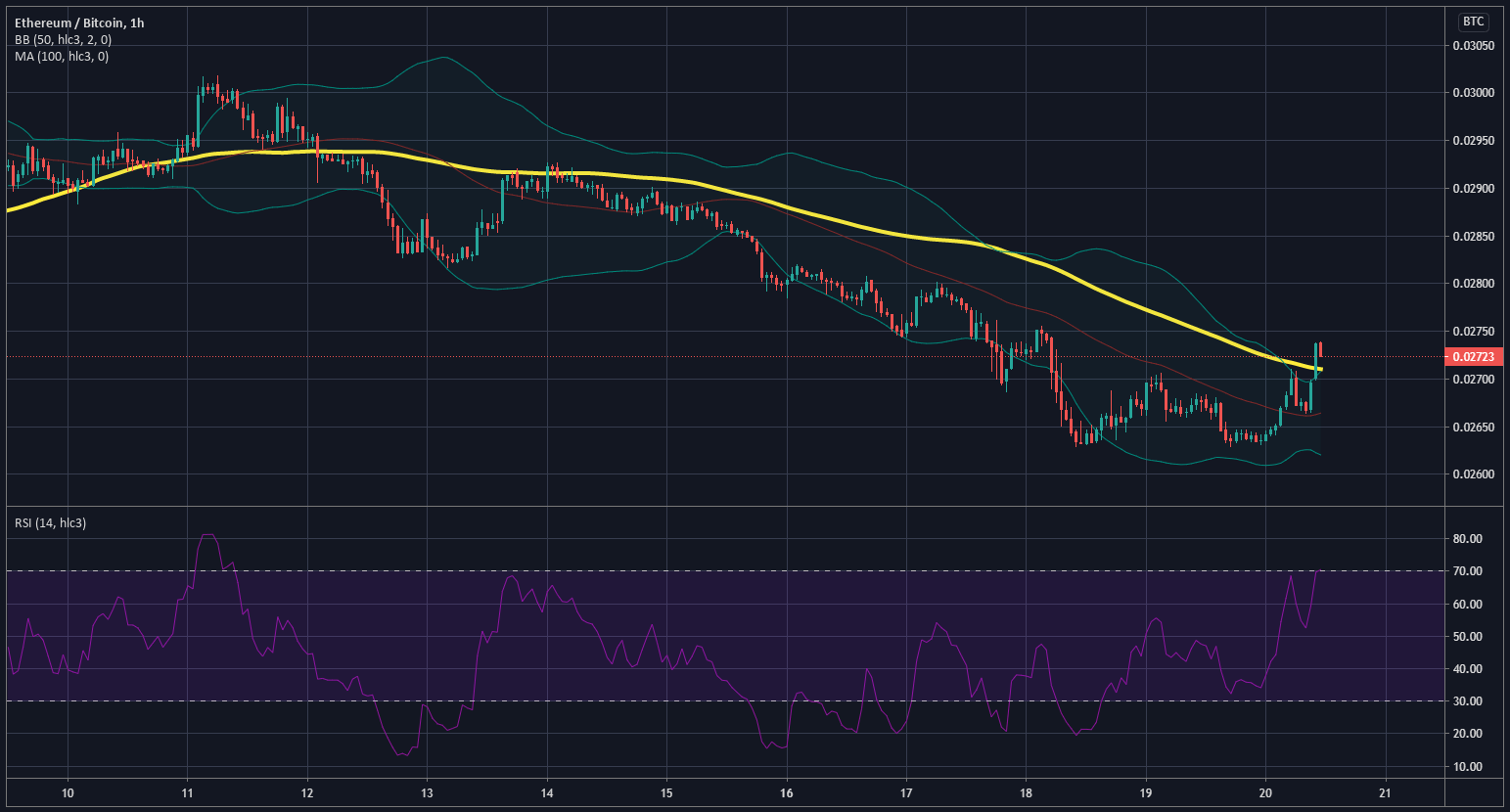 So overall, it seems that Bitcoin will remain King for the time being. But on a long enough timeline, if Bitcoin is unable to actually advance technologically, it might not have the title of king. It would most probably keep the high price associated with it due to the limited quantity of tokens available, but Ethereum will be the go to currency.