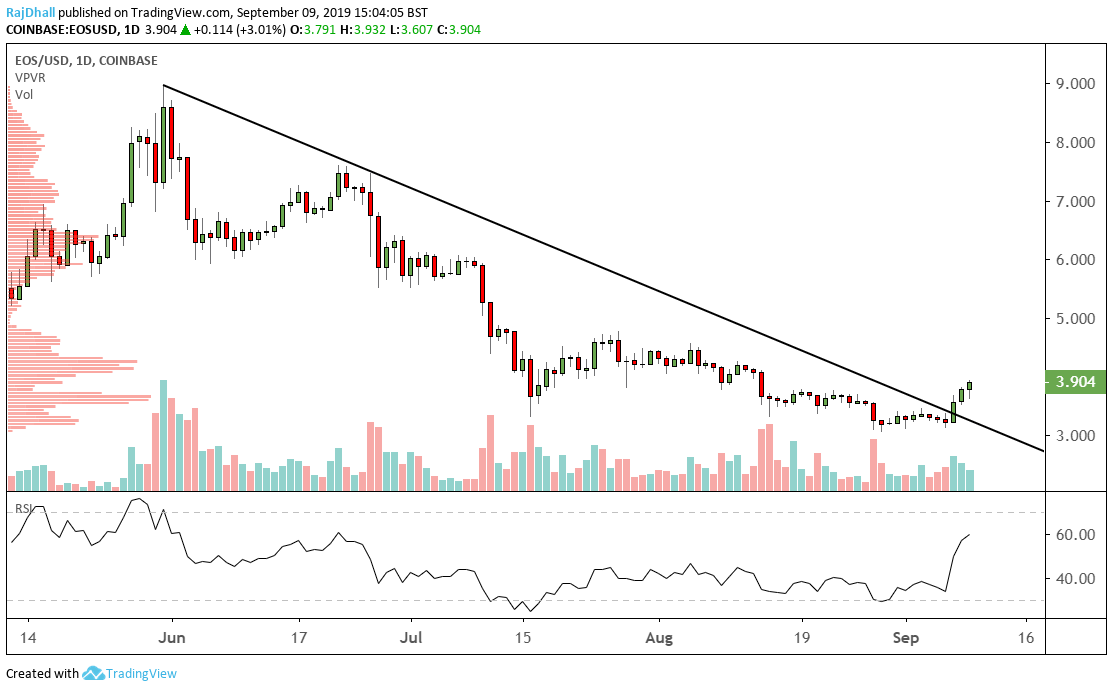 Last week EOS/USD was flirting with the long term trendline that originated back at the end of May.

After consecutive lower highs and lower lows it seems that the price has broken out to the upside.

What is good about this move is that it was backed by volume. Right at the end of the move those who have a keen eye would notice the divergence from the RSI indicator.

On the daily chart above the next major resistance is 5.50. This is where price found support after the rally up to 8.90 in May.

3.00 could now be a base for the pair as it was firmly rejected and now inspired a break to higher levels.

One thing I would be wary of on the technical standpoint is the RSI at its current level. Right now it is forming something called a failure swing or bearish hidden divergence. If it reaches overbought it might attract some sellers. From an intraday point of view 3.45 will be the support level to watch if there is some mean reversion after the break higher

BTC/USD hit the intraday high above $11,400 during early Asian hours and retreated to $11,226 by press time. The first digital coin has stayed unchanged on a day-to-day basis and since the beginning of the day, moving within a short-term bullish trend amid low volatility.

All phases of Ethereum 2.0 will positively impact the network – Analyst

The anticipation of Ethereum 2.0 is continuing to rise as the activity on the network is surging. Kelvin Koh, the co-founder of venture capital firm Spartan Group, has recently said that ETH 2.0 will have play a key role in the growth of the network.

Ethereum Classic (ETC) settled in a range above $7.00 after wild price swings on the weekend. At the time of writing, ETC/USD is changing hands at $7.20, mostly unchanged both on a day-to-day basis and since the beginning of Tuesday.

ADA/USD bulls remain in control as price goes up

Cardano successfully launched the Shelley hard fork a few days back and it currently has >620 active stake pools. These pools have a total of 2.74 billion ADA committed to staking. According to ...