Elrond price crashed approximately 35% in the last 24 hours while the network moves closer to “infrastructure decentralization.”

Despite the positive fundamental developments behind EGLD, the recent sell-off could extend as support weakens.

The road to decentralization

Elrond is in the final phases of a bootstrapping process that involves “infrastructure decentralization.”

For this purpose, a set of software tools known as “Delegation Manager” was launched, allowing users to start their non-custodial staking operations.

The blog post also detailed the launch of “Syntropy Integration” with the Elrond network, which helps validators or node operators better manage their servers and related functions.

“By equipping average node runners with orchestration tools that are typical for professional operators, Syntropy can potentially help with retaining high Validator availability and security while the Elrond Network grows further decentralized. We’re looking forward to seeing the outcome of the public tests.”

Unlike other blockchains, Elrond is launching new products and features every day for 100 days to increase the utility around its blockchain via a campaign known as “Hypergrowth100.”

To this end, Elrond announced its entry into the DeFi space via the “Elrond DeFi 2.0 module” on February 19.

Using the capabilities of the EGLD blockchain, Elrond plans to solve the problems that exist in the current DeFi landscape, like high fees, higher confirmation times, among others.

Elrond price hit an all-time high at $180 on February 9. Since then, EGLD has formed a series of lower highs while bouncing off a flat resistance at $126.

Joining these downswings and the horizontal support result in a descending triangle pattern.

Such technical formation predicts a 40% correction determined by measuring the triangle’s y-axis and adding it to the breakout point at $126. The bearish outlook projects that EGLD could retrace towards $74. 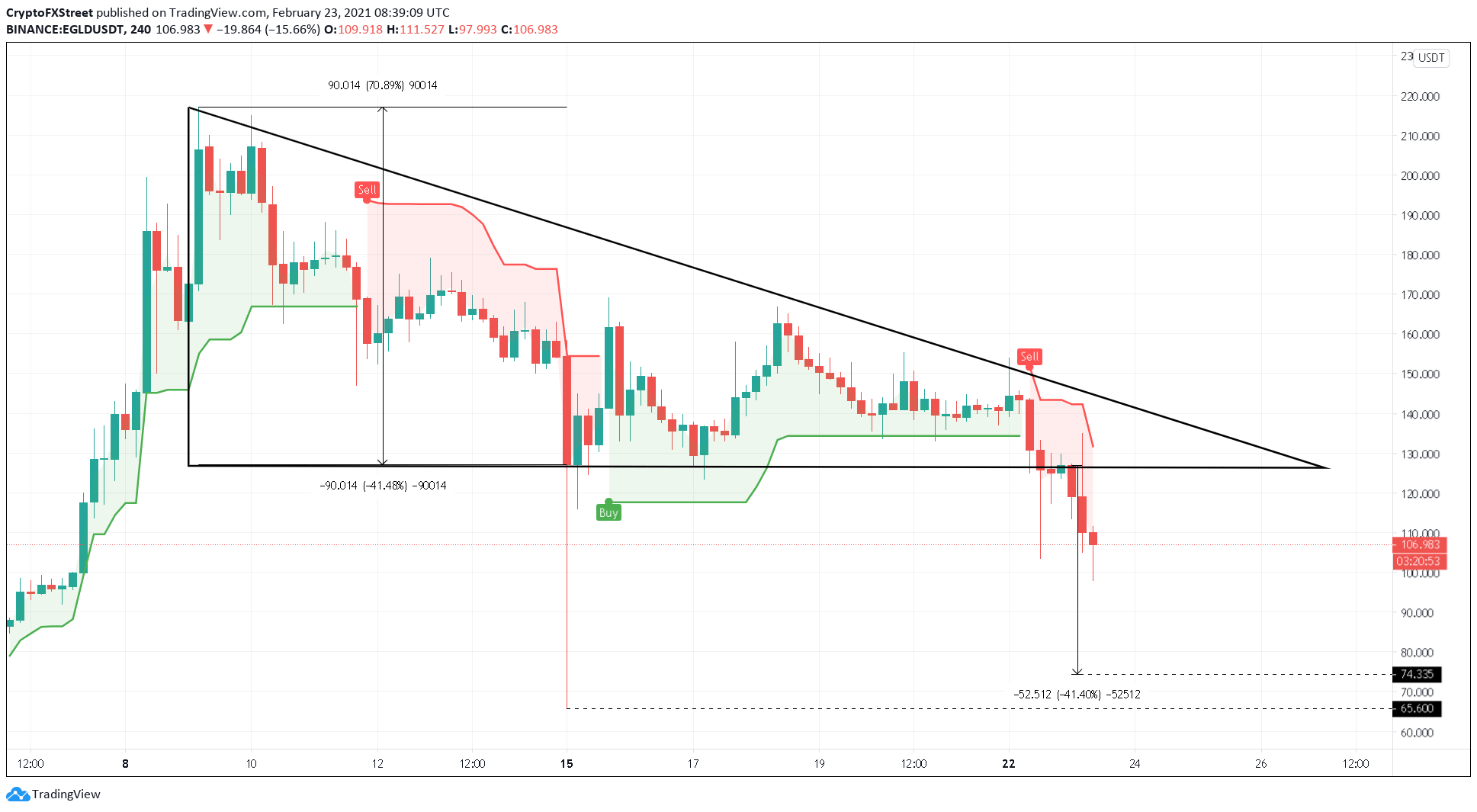 At the time of writing, EGLD has already broken out of the triangle’s x-axis and is trading at $106. This bearish confirmation suggests that Elrond price has another 20% before it hits the intended target.

Adding credence to the bearish thesis is a 29% drop in the development activity from February 16 to February 23. Correspondingly, EGLD price has seen a 37% decline within the same period.

While an increase in this metric is perceived as a bullish sign by investors, the contrary holds as well.

On the other hand, a 4-hour candlestick close above the triangle’s hypotenuse at $142 will invalidate the bearish thesis. In such a case, EGLD could climb to $160.

The Graph is teetering at $1.73 after its uptrend ran into a barrier around $2.9. Declines have been consistent within the confines of a descending parallel channel. Losing the middle boundary support has left GRT bears with open-air to explore.

Chainlink price nears the end of an ascending broadening wedge pattern that forecasts a 50% drop. Transactional data shows that $17.8 could be an inflection point. If LINK price slices through this support, then a drop to $13 seems likely.

XLM poised for massive 27% breakdown, as the technical picture worsens

Stellar has recently been rejected from the yearly high of $0.61. Bulls tried their best to secure higher support but failed in that task. XLM continues with the breakdown below a descending trendline that seems to have confirmed a triangle pattern on the 4-hour chart.