Elrond price has seen a massive 790% growth since the beginning of the year. In the first week of February alone, EGLD rose by 250% to hit a high of $220.

Since then, this altcoin slipped into consolidation, despite several fundamental developments that have put it into the crypto spotlight.

Taking DeFi to its natural conclusion

Elrond announced the launch of “Elrond DeFi 2.0 module,” a community-focused effort to make DeFi accessible to the general public.

This initiative will be powered by the EGLD blockchain and include products and features like automated swaps, liquidity pools, borrowing/lending, synthetic assets, yield farming, among others.

Based on a blog post, the DeFi module will be launched in phases starting from the second week of April 2021.

According to Elrond’s founder and CEO, Beniamin Mincu, one of the most exciting projects to be released is the launchpad.

“Through this, projects from around the world will be able to accelerate deployment of many open source applications on the Elrond network, while securing funding and gathering strong support within the Elrond community.”

The so-called DeFi summer witnessed in 2020 was the start of a radical change in the global financial system.

However, high fees and longer confirmation times caused by the Ethereum blockchain’s inefficiencies prevented many from participating.

Protocols like the Binance Smart Chain, Polkadot, Cosmos, and now Elrond are all trying to make DeFi accessible to the masses.

To this end, the Elrond blockchain recently launched a  mobile wallet and global payments application, “Maiar,” that has already seen a lot of success.

“In less than 2 weeks, more than 183k users have joined, more than 200k accounts have been created, and more than 1.5 million tx have been processed,” said Mincu.

Due to strong growth in the Elrond community and the fast-paced innovation that is yet to be launched, EGLD’s future looks bullish from a fundamental perspective.

Elrond price broke out of a bull flag pattern on February 18, suggesting that a 70% upswing was around the corner.

Since this technical formation is considered a continuation pattern, Elrond price breakout will likely follow the direction of the previous trend.

In EGLD’s case, the initial market structure was defined by a 250% rally that formed the “flag pole,” while The consolidation phase that followed resulted in the “flag.”

Now, the bull flag pattern predicts a 70% upswing, which is the length of the flag pole added to the breakout point at $152. This target puts Elrond price at $256. 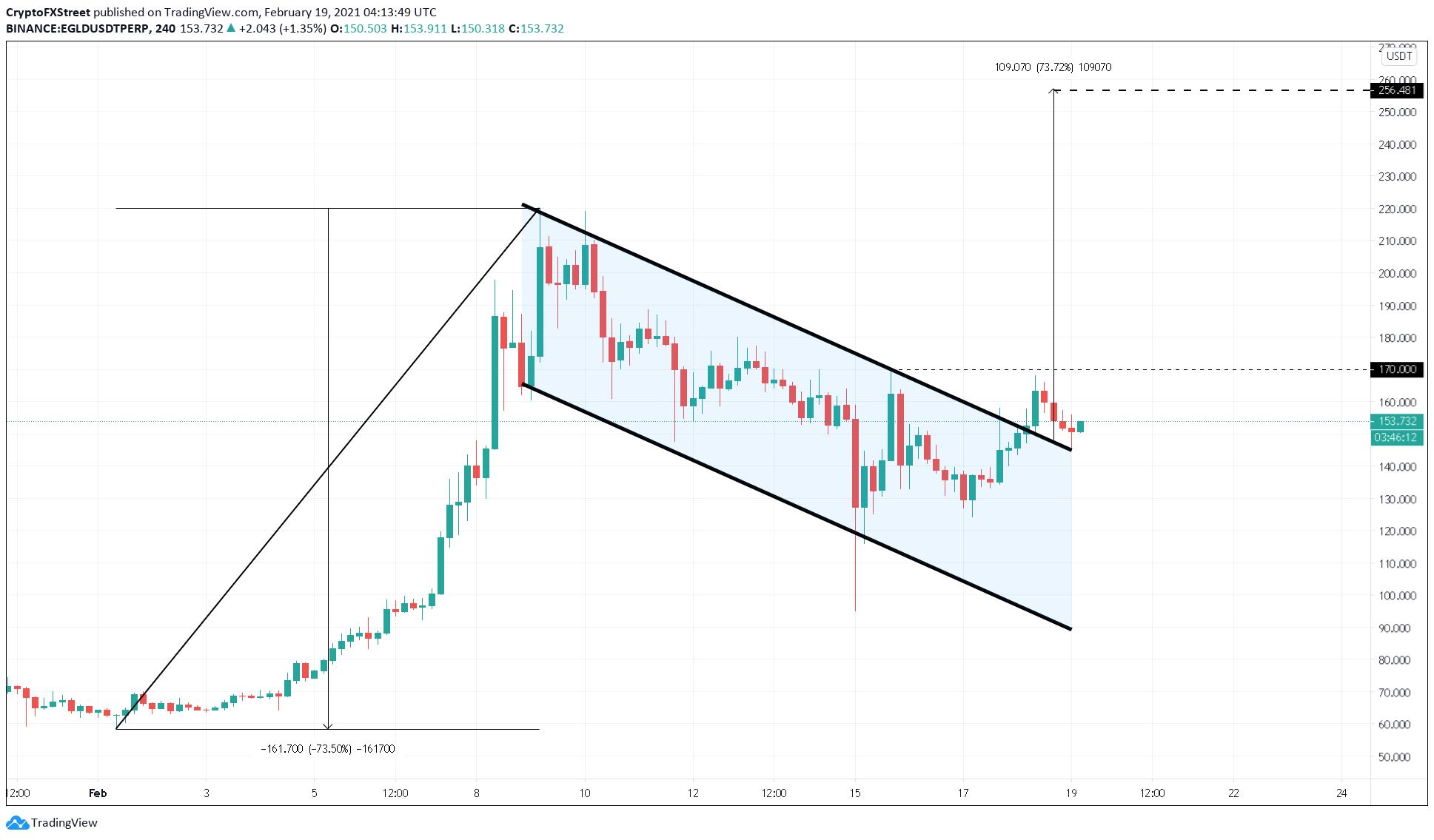 While the breakout seems to be underway, investors should note that a secondary confirmation for the upswing hasn’t formed yet.

A 4-hour candlestick close above the $170 level would create a higher high and mark the consolidation phase’s end.

EGLD’s social volume shows that the chatter around this cryptocurrency is quite pessimistic.

From a counter-sentiment perspective, such market behavior benefits the bulls as cryptocurrencies tend to behave differently than what the crowd expects.

In fact, the social volume index is at 22, which is approximately the same level seen in mid-January, before Elrond price skyrocketed by a whopping 530%.

It is worth noting that if Elrond price fails to slice through the $135 resistance level, it could hinder the projected upswing. In such a case, EGLD may pull back to the flag’s base around $88.