Dogecoin price was primed for a sharp move before today. It had closed with three consecutive inside days, predicting a range expansion for the digital coin. The DOGE outlook remains neutral with a slightly bullish bias but not speculation on further social media hype.

Dogecoin price could trade sideways for a long time, so traders beware

It is well known by now that DOGE takes its name and logo from the Shibu Inu dog in the doge meme that was popular on the internet in the early years of the past decade. Started as a joke, the cryptocurrency has recently achieved its form of celebrity status, with individuals ranging from Snoop Dogg to Mark Cuban to Elon Musk putting their support beyond the digital token.

In a new twist, Elon Musk tweeted today: “The Dogefather SNL May 8”. It references his past tweets about DOGE and his upcoming appearance on Saturday Night Live (SNL). The result was a 30% spike for the cryptocurrency.

The Dogefather
SNL May 8

The Musk banter follows a tweet earlier this week from Mark Cuban about how people can use the coin for transactions, highlighting his team’s success, the Dallas Mavericks, adopting DOGE as a payment alternative.

Because Doge is the one coin that people actually use for transactions. We take many others via @BitPay . But people spend their Doge and that means more businesses will start taking it. The greatest inhibitor to it's growth is that you can't spend the Doge you buy on Robinhood https://t.co/TrhT9pYkcb

After the explosive rally in January, DOGE retraced nearly 80% of the gain before rebounding in February near the then all-time high. For the next two months, it moved sideways with some gyrations until the April ramp higher. This time the altcoin corrected around 70% and is now trying to rally to the all-time high. Could the same fate await traders, a long period of sideways price action?

Due to historical precedent, the unpredictability of social media banter, and the deceptive technicals, the outlook remains neutral. 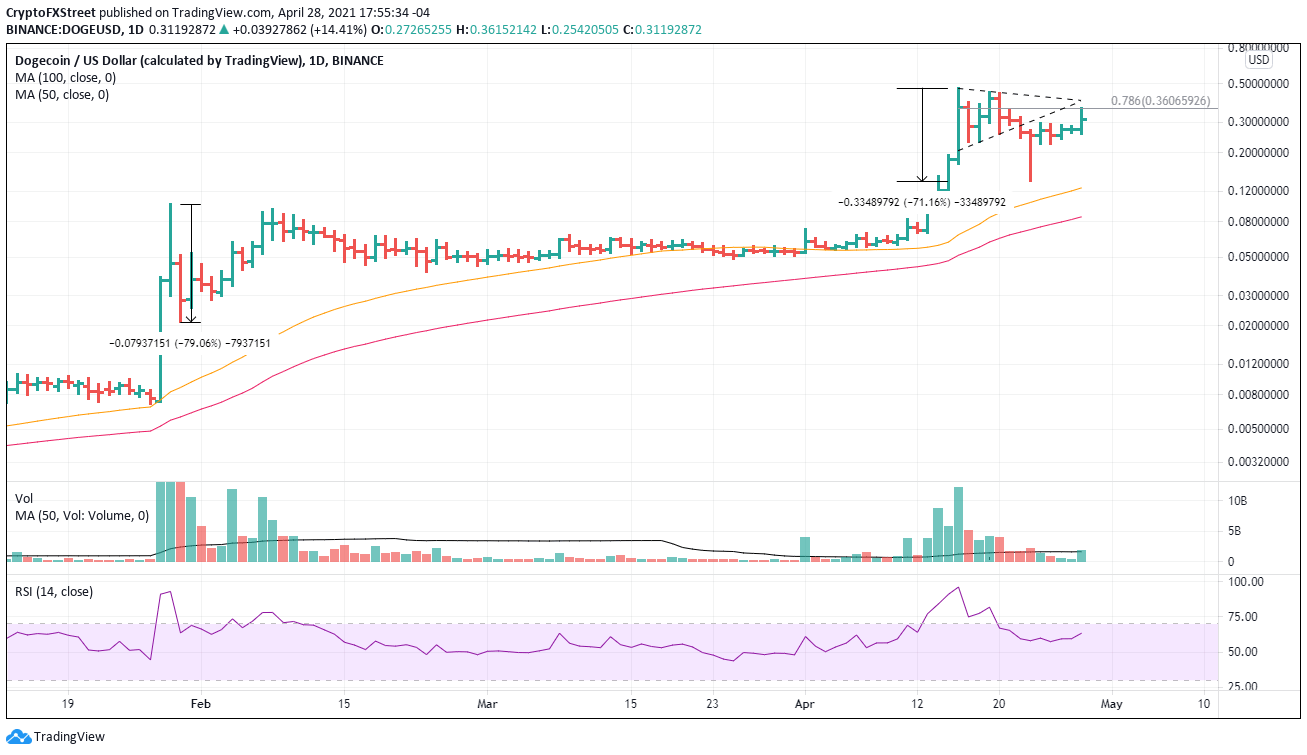 The range between the all-time high at $0.470 and the low of the April 23 hammer candlestick pattern at $0.269 is the sandbox where traders can play in the short term.