Dogecoin price slows down its collapse as it approaches a crucial barrier. If the buyers make a comeback here, DOGE could propel to the local top.

Dogecoin price faced an intense sell-off as it failed to perform during the much-anticipated “Doge day” on April 20. Since then, DOGE has dropped nearly 35% to a crucial barrier.

This demand zone ranges from $0.227 to $0.269 and is the best chance buyers have at rescuing the meme-themed coin from sellers’ wrath, especially since it coincides with the 50 Simple Moving Average (SMA) on the 4-hour chart. In case Dogecoin price sees a resurgence of investors or a spike in buying pressure due to an unforeseen event, DOGE might retest the local top at $0.448 after a 65% upswing.

A confirmation of this upswing will arrive after DOGE produces a decisive close above the 50% Fibonacci retracement level at $0.319. 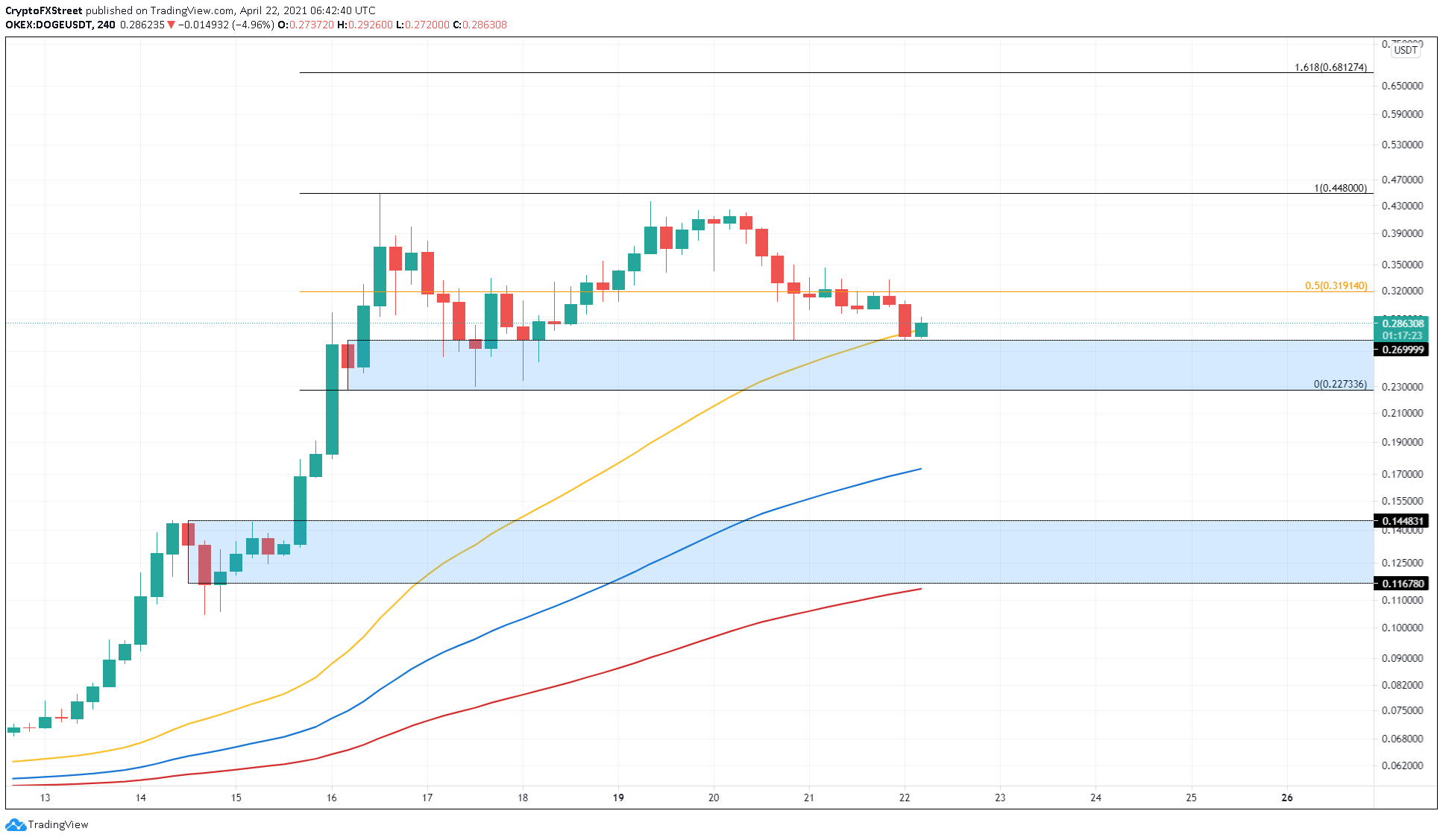 While the technicals point to a bullish picture if the demand zone holds, on-chain metrics suggest that the investors are disinterested in the meme coin and are slowly pulling out of DOGE.

If this trend continues to follow, Dogecoin price might see a range-bound, non-volatile move for the foreseeable future.

According to IntoTheBlock’s In/Out of the Money Around Price (IOMAP) model, nearly 47,000 addresses that purchased 12.63 billion DOGE at $0.32 are “Out of the Money.” Hence, a short-term spike in buying pressure will face selling pressure around this level from investors who might want to break even.

Additionally, the lack of support levels makes it challenging for the bulls to surge higher, adding credence to a potential drop.

A similar pessimistic outlook is seen across the number of new addresses, which has dropped from 160,000 to 56,000 since April 16. This 65% slump provides headwinds for the bullish momentum.

This drop-off can be used as a proxy to investors’ interest. Fleeing capital from the Dogecoin network paints a bearish picture for Dogecoin price, suggesting that these market participants are reallocating their holdings or booking profit.

Therefore, if the said demand zone is breached with a solid 4-hour candlestick close below $0.227, it would invalidate the bullish outlook and may trigger a 35% sell-off to the subsequent area of support that stretches from $0.116 to $0.144.