Dash is cryptocurrency that has been transforming outlook since its inception. It was launched in 2014 as XCoin but because of the privacy features it rebranded to Darkcoin but in it change again to Dash to allow it to be a global payment processing system. The Dash team is one of the most active in the space. Dash has today announced the release of its much-awaited DashCopay wallet for iOS and Android. The wallet is going to have some of the best features including ability to set a local currency and create share or join shared wallets using multi-signature among others. The wallet is still in the beta stage, but further developments are in progress leading to the official launch.

AloGateway, a global payment processing platform yesterday made an announcement that it was partnering with Dash, which is also referred to as ‘Digital Cash.” The reason for this partnership is to aid AloGateway in its expansion into the Asian market.  Dash will now be added to the platform which is said to be making over 100,000 transactions in a single day. The CEO of AloGateway said while commeting on why Dash among other currencies:

“We had a number of reasons for choosing Dash as one of first digital assets we offer on our platform. First, Dash has among the lowest fees and fastest transactions of any blockchain network. Dash also has an active community, particularly in parts of Asia and Europe where we are seeing a lot of potential for growth.”

Dash price has been walloping in selling pressure just like other virtual currencies in the market. The cryptocurrency is currently stuck within ranging channel with the resistance at $272.0 and supported at $240.5. DASH/USD is changing hands at $266, besides it is facing acute resistance at $270. The upper limit of the ranging channel also coincides with the resistance from the 61.8% Fib retracement level with the last high leg at $317.7 and a low of $242.7. Dash price is battling for a support at $265, but the short-term support at $260 will continue to hold in the medium term. 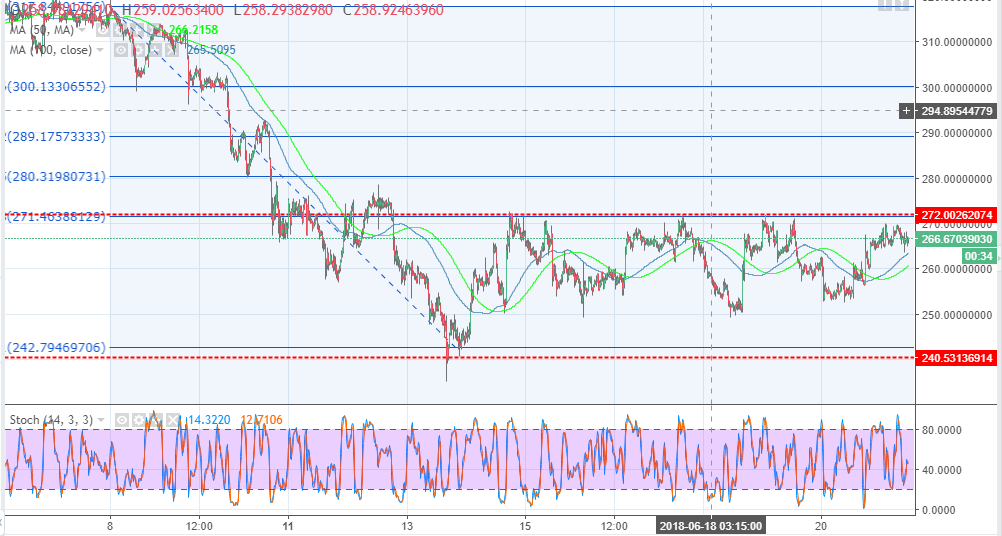