Oct. 24, China’s President Xi Jinping endorsed blockchain technology sending the Bitcoin market spiralling into a $3000 movement, Bitcoins largest since before the 2017 Bull Market. Does the president’s announcement mean that the Chinese government will change its views on crypto? And, was the most recent high for BTC price pushed by this announcement?

Some time into the future, an author of a history book on crypto will dedicate more than one chapter of the timeline unfolding Chinese cryptocurrency laws. Here, just to give you perspective, we’ll only take a look at the key milestones.

As early as in 2013, The People’s Bank of China (PBOC) prohibited all the businesses from making transactions in Bitcoin (BTC). The regulators became interested in the technology, though, and started exploring the possibility of launching its very own cryptocurrency.

Yet, in 2014, PBOC made commercial banks and payment companies close Bitcoin trading operations. In 2017, the lawmakers supported a ban on cryptocurrency exchanges seeing 173 platforms closed. And last but not least, the government called on to eliminate all the mining operations in 2018.

The situation slightly changed right after the country’s president said they “must take blockchain as an important breakthrough for the independent innovation of core technologies”.

Right after the president’s announcement, a new law on cryptography that is about to come into effect on Jan. 1, 2020 saw the light.

The law is geared towards “facilitating the development of cryptographic business and ensuring the security of cyberspace and information”, according to state media agency Xinhua.

So, what happened? Does the president’s statement on blockchain also mean a change of China’s strict сrypto policy?

Crypto war between the US and China

The government has one reason to reassess their views on crypto, and it is a Tech Cold War between China and the U.S. In his statement, Xi Jinping said he "demanded deep integration" between blockchain and "other information technologies including artificial intelligence, big data and [the] Internet of Things". He also mentioned that blockchain technology should be developed further in order to gain an “edge over other major countries”.

Interestingly, the People’s Bank of China has been progressing on its centralized digital currency (CBDC) since Facebook’s Libra looked to shake up the global economy. Also, they accelerated their work on CBDC in response to Binance announcement about the launch of Venus.

No wonder, a strong global stablecoin is a sensitive subject for the government that fights for world economic dominance. Chris Mack, founder and CEO of crypto exchange Levidge, said to TradeSanta that  “Chinese leaders are patient strategists, and as Mark Zuckerberg warned, China will embrace blockchain technologies in order to gain a competitive advantage.”

Is it possible that China’s authorities battle against their own fears as well? It’s widely known how U.S. President Donald Trump views cryptocurrencies. Also, Zuckerberg’s Libra continues to deal with pervasive scrutiny.

Whatever the truth is, Beijing has not canceled its ban on crypto beyond its control yet. In addition to that, mining crypto in the country is still prohibited as well as trading.

Blockchain doesn’t equal crypto. “They support the technology of blockchain, but that doesn’t mean that they support cryptocurrencies like Bitcoin”, Joel Kovshoff, TradeSanta’s market analyst and Athena Enterprise Software CEO, said, “But what you do see are people around the world assuming that this will support cryptocurrencies, specifically Bitcoin, and we saw a massive pump. What I would like to note is it seems that Chinese citizens, due to the difficulty of buying cryptocurrencies like Bitcoin in the country, may not have been the leading force behind the market’s boom.” 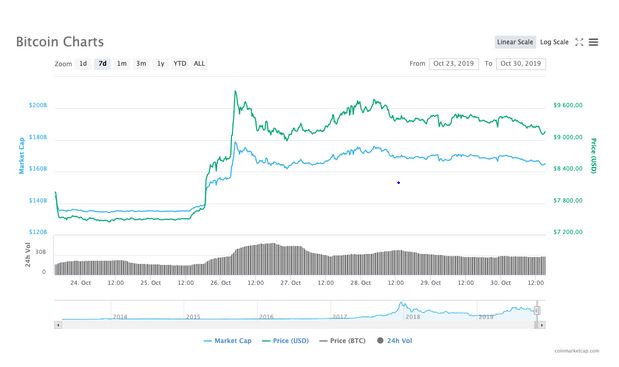 Indeed, the market sentiment right after the announcement also changed. By Friday, the price of the crypto gold rose by more than 30 percent, jumping as high as $10 332 on Saturday, and held most of those gains through the next week.

“The Xi announcement may have issued a bull trend in the market, but I think it was prepared for a sharp rally structurally,” Mack explained to TradeSanta, “Bitcoin had already bottomed around $7200 on Oct. 23 after being heavily shorted, and I believe sellers were exhausted.”

The expert also added that outflows of physical Bitcoin from exchanges signal that there are new long-term holders that are probably using cold storage and unwilling to sell at these price levels.

That is to say, the announcement of a Chinese president was not much of a change in policy, but rather a confirmation of a long-term trend. The government has focused on rolling out its own cryptocurrency, and as for the pump, as Kovshoff said, that it’s not realistic to think that China was behind this recent movement in Bitcoin’s price.