Crypto derivatives monthly volume hit a new all-time high of $602 billion in May.

Crypto derivatives monthly volume increased by one-third in May to hit a new all-time high of $602 billion, according to UK-based data aggregator CryptoCompare.

The new record is only just a shade past the previous one of $600 billion, registered in March. However, derivatives are becoming ever more popular and now account for 32% of the crypto market — up from 27% in April. In percentage terms, the monthly volume increase in May for derivatives was six times larger than the increase in spot volumes, which was up 5% to $1.27 trillion.

Huobi, OKEx and Binance accounted for about 80% of May's derivatives volume combined. In percentage terms, CME saw the largest monthly increase of 59%, though its $7.2 billion in volume was dwarfed by market leader Huobi — posting a 29% monthly gain in volume with $176B. 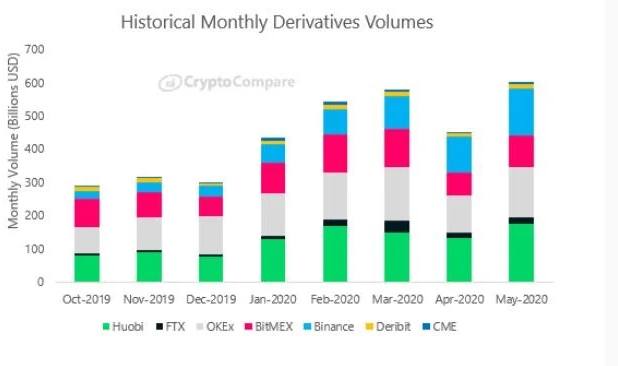 Institutional options volumes on the regulated platform CME also hit record levels in May — increasing a massive 16 times from April’s figures to a new monthly high of 5,996 contracts traded. The platform also broke a new daily record on May 28, withCME trading 1,418 Bitcoin options contracts. Derebit's options volume more than doubled in May to $3.06B.

There can be only one

CryptoCompare's report highlighted some noteworthy shifts in the world of stablecoins, with USDC and PAX both seeing massive declines in volume against BTC — with USDC down 78% this month while PAX lost 97%. USDT represents the overwhelming majority of stablecoin to BTC trading with 98%.

The biggest day of the month, as you might expect, was Halving Day Eve on May 10, which saw a huge spike in spot trading volumes to $64.7 billion. To put that into context, it’s just under the top trading day in April ($66.2B) and considerably less than Black Thursday in March ($75.9B).

Bitcoin (BTC) broke above the local resistance created by $13,250 and hit a new high of 2020 at $13,490. The pioneer digital asset is poised for further growth as the upside momentum gains traction amid little resistance from sellers.

XRP looks poised for a breakout to $0.30

XRP is currently trading at $0.252 after successfully defending a critical support level at $0.247. In the past two weeks, the digital asset has been rejected from the upper boundary of the daily ascending triangle around ten times.

JPMorgan Chase announced that its digital currency, JPM Coin, had been used for commercial purposes this week. A large technology client used it to send cross-border payments.

The network’s utility increases, while TRX prepares for a massive price movement

TRON's weekly report is out and talks about the finalization of the TRC-20 shielded contract on the mainnet and a security test for the smart contract on TVM instructions to stake and unstake.