Bitcoin exchanged hands at its all-time high (ATH) but left 20,000 untouched on Monday. The skyrocketing prices are a great way to start the final months of the year. However, the leading cryptocurrency exchange in the United States, Coinbase, has reported similar delays in Bitcoin withdrawals identical to 2017’s bull market.

Network congestion during bull markets is not new to Bitcoin. Coinbase customers said they were experiencing delays in executing Bitcoin withdrawals as the flagship cryptocurrency rallied to its ATH for the first time since December 2017.

The cryptocurrency exchange cited network congestion in 2017 as it reported a backlog in Bitcoin withdrawals. Bull markets tend to be characterized by increased withdrawals, perhaps due to investors cashing out to take profits.

The delay in withdrawals in 2017 saw waiting periods of up to 12 hours before execution. At the time, Coinbase addressed the matter, saying:

Were experiencing delays due to a large number of bitcoin withdrawals. All funds remain secure. We understand this is frustrating for customers and will continue our efforts to process all these withdrawals as swiftly as possible.

Coinbase has also reported several issues amid busy trading periods in 2020. The challenges, mainly outages, have been rectified as soon as possible. It is not clear how long the current delay will last.

The bellwether cryptocurrency has corrected to $19,630 after the impressive bullish momentum lost steam before hitting $20,000. Bulls are focusing on establishing higher support, preferably above $19,000. The bull market seems poised for more price action, eyeing $22,500 if the critical hurdle at $20,000 is broken. 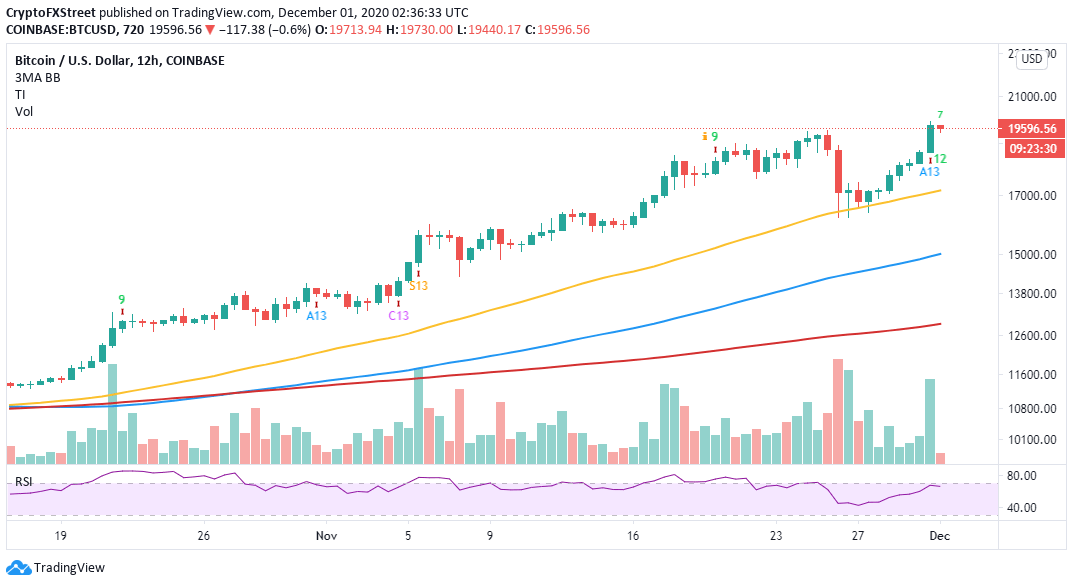 On the flip side, the bullish outlook will be invalidated if Bitcoin fails to find support above $19,500 and $19,500. Besides, the TD Sequential indicator might present a sell signal on the 4-hour chart in the coming sessions. If sell orders increase, Bitcoin could spiral to test the 50 Simple Moving Average.