Cardano's native token ADA's utility is likely to increase with a spike in daily active wallet users and transactions in the network. Charles Hoskinson stresses the importance of "Hydra," Cardano's layer-2 solution.

Cardano's Alonzo upgrade added smart contracts capability to the Ethereum-killer network. Developers behind Cardano anticipated a spike in traffic on the network since the launch of smart contracts.

In September 2021, Cardano discussed adding a layer-2 solution, Hydra, to boost the ADA network's scalability. High transaction fees have plagued the Ethereum network for a long time, driving developers and users to Cardano. Hydra is expected to regulate the fee rate on the Cardano blockchain and tackle the menace of high fees.

Charles Hoskinson, the Founder of Cardano, explains that it has become a high priority to pour more resources into Hydra. Once Cardano's DeFi community directs higher volume transactions to the network, Hoskinson says,

Cardano is going to get hammered by an enormous amount of traffic. Hydra is a necessity for that.

Proponents argue that Cardano is living up to its reputation as an Ethereum-killer. The altcoin announced earlier today that it had crossed 2 million wallets, a key milestone. 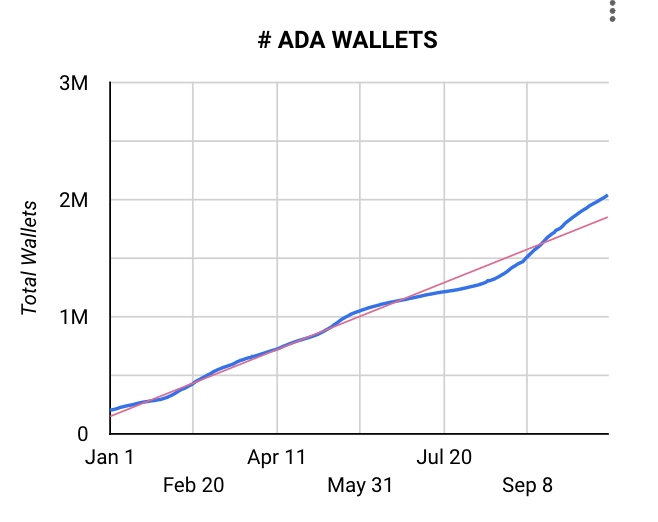 The increasing capital inflow from institutions fuels the rise in demand for Cardano. In the last week of October 2021, Cardano funds noted an inflow of $5 million from institutional investors.

72% of Cardano's circulating supply is staked. The percentage of supply staked has been on the rise since the successful implementation of the Alonzo hard fork. An increase in staked supply reduces the circulation of ADA tokens, fueling the Cardano price rally.

FXStreet analysts have evaluated the ADA price trend and predicted that a steep correction to $1.5 is likely.