During the Cardano Summit 2021, Input Output Hong Kong (IOHK), the development company behind Cardano, has revealed that the blockchain would be partnering with Chainlink to integrate its oracles to support developers.

The Ethereum killer has recently become compatible with smart contracts for the first time following the Alonzo hard fork, which took place on September 12.

The integration of Chainlink oracles on the Cardano blockchain would allow developers to supply institutional-grade data into their smart contracts. The oracles would support market price feeds and eventually support other Chainlink decentralized services as well.

Cardano also announced that it has entered into a deal with Dish Network to provide digital identity services to the customers of the TV and wireless service provider. Speaking at the summit, IOHK founder Charles Hoskinson stated that the partnership would boost the adoption of Cardano while benefitting Dish’s users.

Cardano price could see further decline prior to recovery

Cardano price has printed a falling wedge pattern on the 12-hour chart, suggesting that ADA still has room to fall before reaching the bullish target of the technical pattern.

The Ethereum killer has fallen nearly 30% from its all-time high as ADA continues to consolidate. Cardano price may drop further to test the reliability of the governing chart pattern before the 35% bounce given by the falling wedge pattern could be on the radar.

The first line of defense for ADA is at the 23.6% Fibonacci retracement level at $2.19. Should Cardano price lose this level of support, the token may drop to the lower boundary of the chart pattern at $1.87, near the 200 twelve-hour Simple Moving Average (SMA). 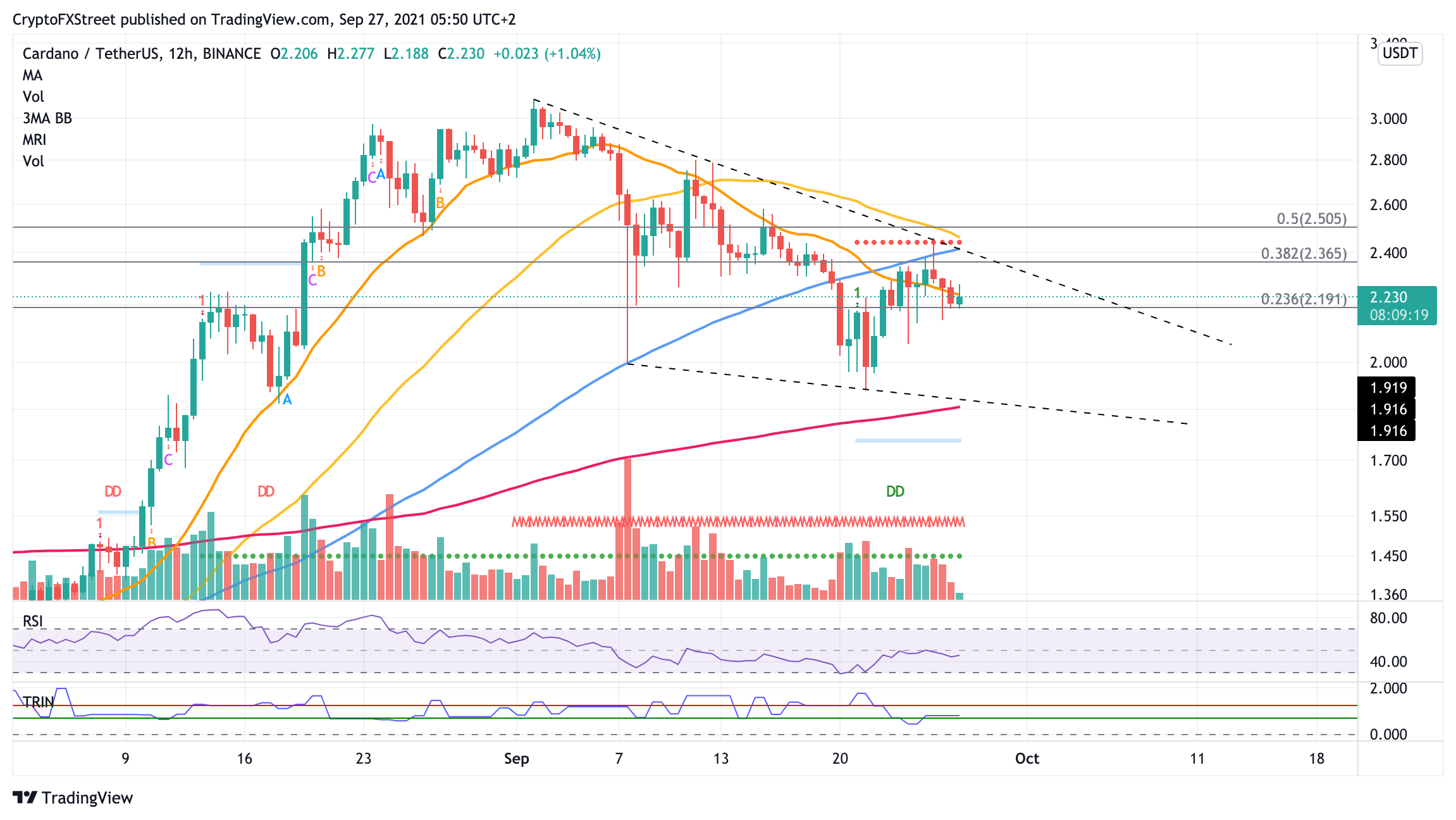 Should ADA bulls take charge, Cardano would see its first hurdle at 38.2% Fibonacci retracement level at $2.36. Additional obstacles may emerge at the 100 twelve-hour SMA at $2.41, where the resistance line given by the Momentum Reversal Indicator (MRI) and topside trend line of the falling wedge coincide.

Solana price is maintaining its presence above the $22 mark that it reclaimed about a week ago, enabling the altcoin to preserve its uptrend. The next major hurdle for the altcoin stands at $28.28, which will determine whether the uptrend can continue or if SOL will lose the opportunity to regain November 2022 crash's losses.

Cardano price accomplished an impressive 66% rally in January. As the price continues to ascend, there are reasons to consider that a pullback is on the horizon. Traders should be awareof the risk that comes with entering the market early.

Grayscale has been in a storm of allegations and defenses for months now as the asset management company has become a part of another lawsuit. However, this time, Grayscale is the recipient of the lawsuit.

The FTX saga took a rather interesting turn on Monday after the bankrupt cryptocurrency exchange's sister company, Alameda Research, filed a lawsuit against another bankrupt crypto lender, Voyager Digital.