May 19's price crash in the Bitcoin (BTC) spot market wiped about $7.56 billion worth of long-leveraged positions from cryptocurrency derivatives markets.

The event marked the biggest bullish leverage wipeout since March 2020. Retail and institutional investors borrowed from leading exchanges to amplify their potential returns.

But a sudden reversal in Bitcoin spot rates, reportedly led by Elon Musk's anti-Bitcoin tweets over the weekend and fueled by China's reiteration of a ban on crypto transactions, blew up bulls' leverage ratios. That led to a so-called liquidity cascade in the derivatives market.

In traditional markets, investors use cash as collateral to back their leveraged bets, but the cryptocurrency industry enables Bitcoin-backed collateral. So, when BTC prices fall, their downside move catches bullish traders — ones with leveraged positions on higher BTC prices — on the wrong foot.

The event led many analysts to simmer down their bullish bias in the Bitcoin market, with Scott Minerd, chief investment officer of Guggenheim Partners, referring to crypto as "Tulipmania." Earlier, the Wall Street executive had called for a $600,000 price target for Bitcoin.

But the mind-boggling long liquidation event has not made everyone bearish. On the contrary, some analysts have highlighted the wipeout as a catalyst for the next big bullish setup in the Bitcoin market.

For instance, pseudonymous trader "Twitterati CL207" posted a long thread on Twitter explaining why he thinks a drop in open interest has made Bitcoin stronger in the long run.

Twitterati CL207 highlighted the role of market makers in running a cryptocurrency derivatives platform. The analyst explained how their strategies assisted in transferring Bitcoin from weaker hands to stronger hands during the May 19 dip.

In retrospect, the Bitcoin futures market is typically excessively long. That prompts market makers to gain exposure on the other side of the bullish trades. So, they open short positions.

But that does not necessarily make the liquidity providers bearish. They prefer to back up their short positions by hedging in spot markets by purchasing BTC or other bullish derivatives exposure (options, futures, perpetual swaps, etc.)

When the long liquidation occurs, market makers close their shorts against them to provide liquidity. They also sell their spot positions to remain neutral.

The trader explained what happened on May 19 when roughly $5 billion worth of long positions was liquidated as Bitcoin's price fell from nearly $40,000 to $30,000 within three hours. But then, the BTC/USD exchange rate quickly recovered back to $40,000.

At the same time, the Bitcoin futures open interest did not follow the spot price recovery. 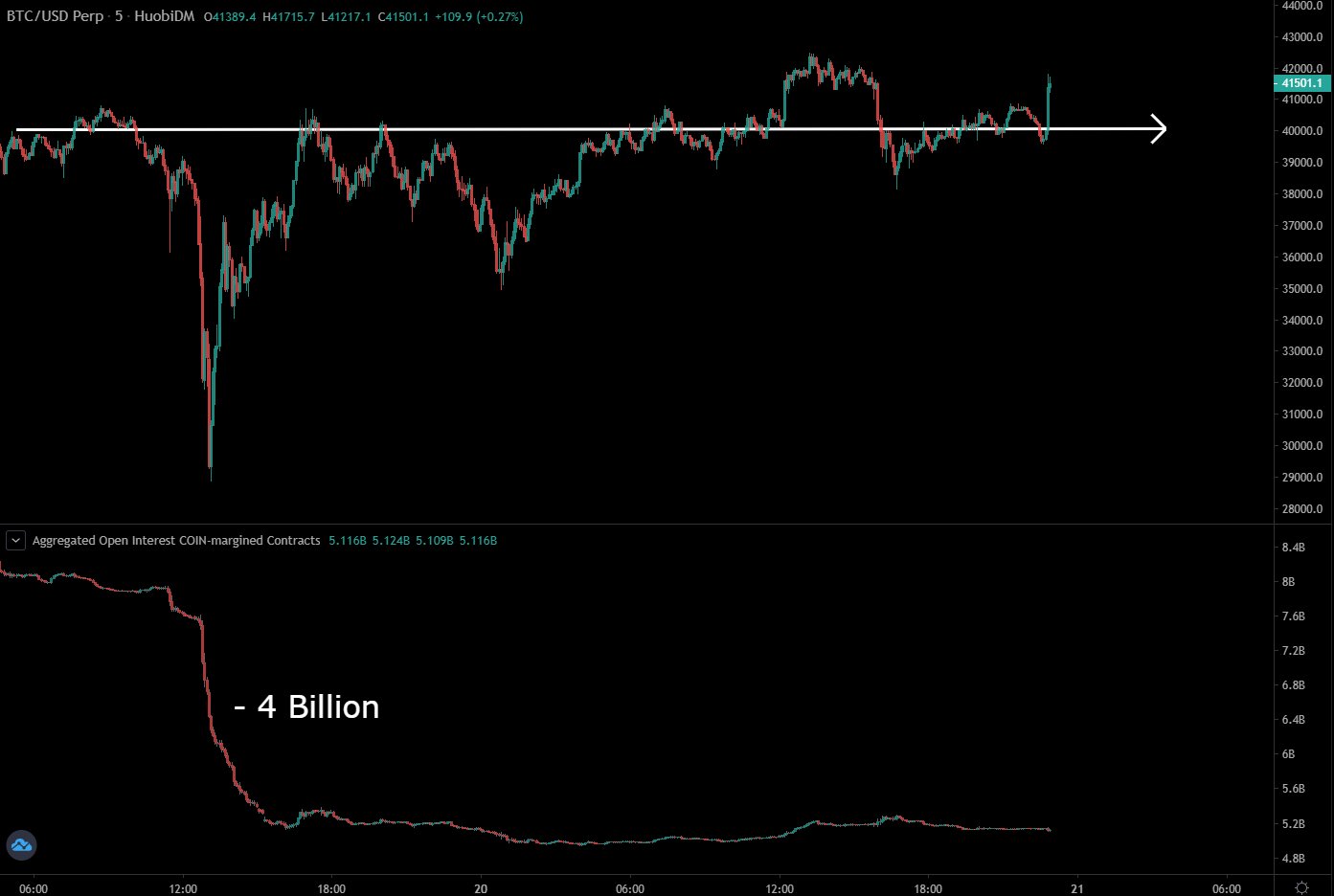 "This means we just had the most significant weak hands to strong hands transfer in probably since March 12, 2020," noted Twitterati CL207, adding that strong hands with real cash bought BTC on the cheap from market makers. He said:

"These coins have now transferred from short-term leverage speculators to real cash buyers."

Who are the strong Bitcoin hands?

Meanwhile, analyst Willy Woo wrote in his latest newsletter that long-term prospects in the Bitcoin market remain healthy, reiterating what fellow trader Twitterati CL207 highlighted in his Twitter thread: that the coins are going into the pockets of long-term investors.

A long-term investor in the Bitcoin market, or a "hodler," is typically an entity that sees the cryptocurrency as a hedge against fiat currencies. Capital injection policies undertaken by Western central banks to cushion the impact of coronavirus pandemic on their economies have raised fears of inflation.

For instance, the United States Federal Reserve announced last year that it wants to push inflation above 2%. The central bank has been maintaining a policy of near-zero interest rates and has been buying $120 billion worth of government bonds and mortgage-backed securities every month.

"There is no need for Bitcoin to replace fiat currencies to maintain value completely," said Vincenzo Furcillo, a risk analyst at Seeking Alpha. He added:

"Despite the possible volatility, the projections show a positive skew over the next five years. In small proportions, Bitcoin should find space as a strategic investment in the portfolio of investors looking to hedge to upcoming inflation."