Bitcoin price has been on a slow downtrend since June 29 and recently came quite close to tagging a crucial demand zone. Now the flagship cryptocurrency is consolidating in hopes of triggering an exponential run-up.

Since the clampdown on crypto in China, the Bitcoin mining industry is in a pickle. From a forced miner exodus to a drop in BTC hash rate and miner revenue, things have changed.

The most recent update is the single largest negative mining difficulty adjustment. This event occurred on July 3, where the difficulty dropped by roughly 28% at 689,471 block height.

The adjustment was a relief to the miners as it bumped up the daily miner revenue to mid-May levels of $0.377 per TH/s. At the time of writing, this value hovers around $0.322 per TH/s.

While things are improving slowly, the stern action from China has pushed many Chinese Bitcoin miners to dump their GPUs on a second-hand marketplace, Xianyu. According to local media outlets, the RTX 30 series GPUs are being sold at half the price.

Interestingly, the offers also mentioned that the buyers were supposed to collect their purchases directly at the mining facility.

The ‘war on crypto’ intensifies

While Chinese miners are under siege, the so-called ‘war on crypto’ has expanded to other regions. In Europe, one of the largest cryptocurrency exchanges in the world Binance has paused bank deposits due to “events beyond [its] control.”

UK’s Financial Conduct Authority (FCA) issued warnings to Binance for offering complex cryptocurrency financial instruments to British citizens without obtaining a license to conduct regulated activity. Initially, the firm did not heed the FCA’s notifications, but later on, Barclays halted its users’ payments to the exchange in question.

Meanwhile, New York State Senator Rachel May submitted a bill on July 2 to require the state public officers to disclose their cryptocurrency holdings on the annual statement of financial disclosure.

The summary of the bill, which will amend the public officers’ law by adding a new paragraph, states that,

The public officers law to require the reporting of type and market value of cryptocurrencies held by the reporting individual, in excess of $1,000 at the close of the taxable year prior to the date of filing.

These developments show that cryptocurrency regulation is coming at a large scale. Even though they seem to have had a negative impact on Bitcoin prices recently, it may actually help strenthen the case for an uptrend. Several technical and on-chain metrics suggest the pioneer cryptocurrency is primed for a move that might restart the bull run.

Such a move is necessary to gather steam before triggering a massive upswing that pushes BTC past the midpoint at $35,618 and attempt to reclaim the range high at $42,451.

Investors need to ensure that the dip might never come and that Bitcoin price might have already started its uptrend. 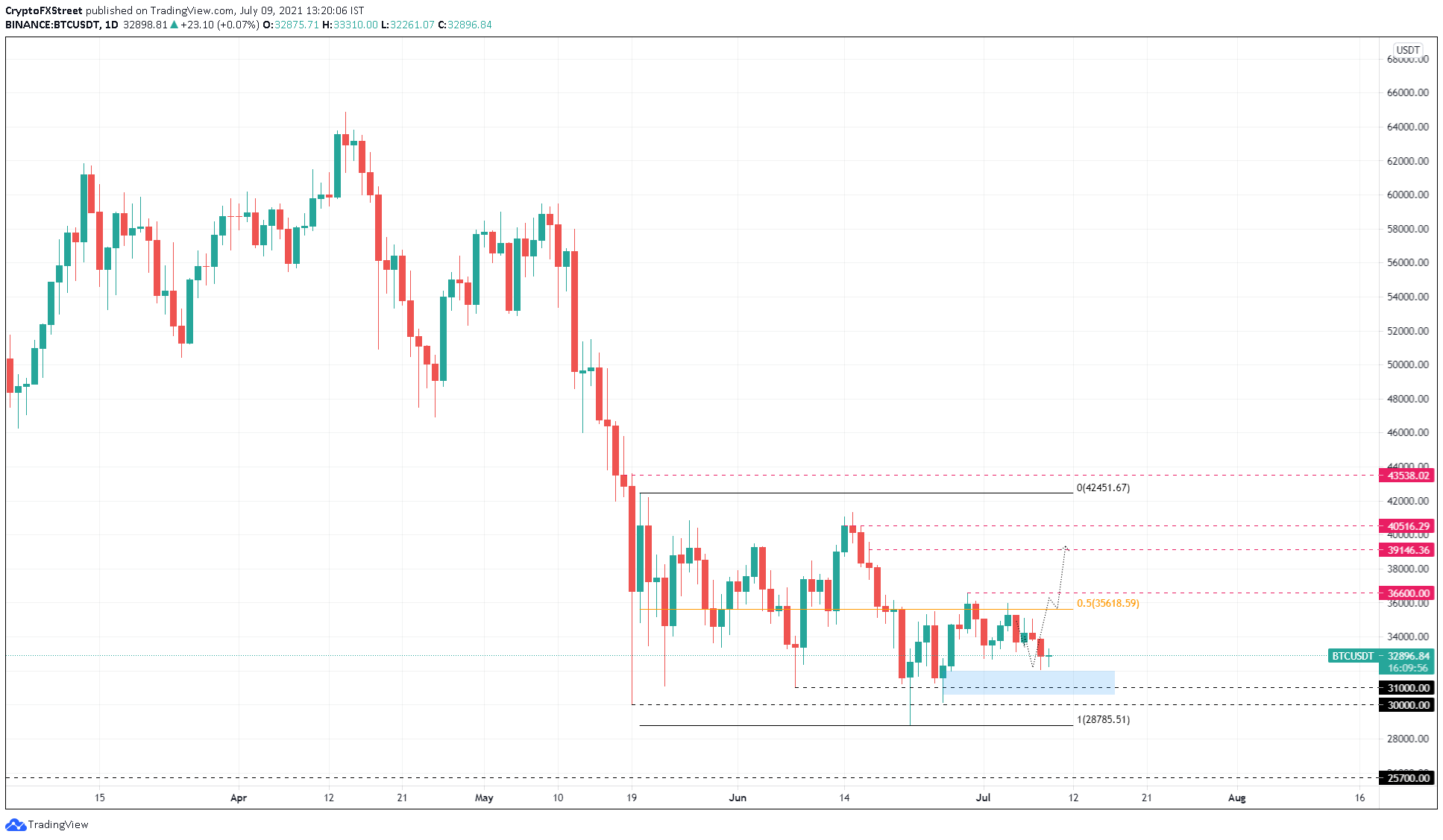 Based on IntoTheBlock’s Global In/Out of the Money (GIOM) model, the immediate support level at $30,956 contains 355,000 addresses that previously purchased 268,000 BTC.

This cluster has relatively fewer investors. A potential spike in selling pressure might push the flagship cryptocurrency to the subsequent level where 5.35 million addresses bought nearly 2.89 million BTC. These market participants accumulated BTC from $10,363 to $28,734.

In a worst-case scenario, buyers should expect a retest of the range low at $28,785.

The 365-day and 30-day Market Value to Realized Value (MVRV) models are both in the opportunity zone, indicating that it is the right time for an uptrend to kick-start. This fundamental index measures the profit/loss of investors who purchased BTC over the past year and month, respectively.

A dip below the zero-line reflects that short-term investors are panic-selling, creating an opportunity for the long-term holders to accumulate.

A previous instance where both the 365-day and 30-day MVRV models were in the opportunity zone happened during the March 2020 COVID-induced crash. Three months after this event occurred, Bitcoin price rose 81% from $5,200 to $9,450.

Therefore, a similar situation could hold the key to reviving the bull run.

Moreover, whales holding 100 to 10,000 BTC have started accumulating, suggesting a bullish development. The number of these investors has increased from 15,930 to 16,000 between May 30 and July 9.

A total of 70 new whales have joined this category over the past month, indicating that they are bullish on Bitcoin price performance in the near future.

While the technicals and the fundamentals seem to be going well for Bitcoin price, a potential spike in selling pressure that shatters the demand zone, extending from $30,573 to $31,979, will lead to a retest of the $30,000 support level or the range low at $28,785 in some conditions.

Although this move does not invalidate the bearish scenario, a breakdown of $28,785 will. In this case, Bitcoin price might sell off 10% to tag the support barrier at $25,700.