Bitcoin price has breached a vital psychological level, hinting at the start of a new downswing. This move has also caused altcoins to take a brutal hit. While the narrative around BTC looks hard to define and indecisive, clearing certain levels will give it the directional bias it needs.

Despite Bitcoin price crashing, the fundamental side of the cryptic ecosystem remains neutral as adoption continues to reach new highs. Regulation on the other hand, seems to be going nowhere.

Increased adoption has been reflected in the move by the Winklevoss twins, Cameron and Tyler Winklevoss to raise $400 million in an equity growth funding round led by Morgan Creek Digital. The round – that saw participants like 10T, ParaFi, Newflow Partners, Marcy Venture Partners and more – puts the Gemini exchange at a valuation of $7.1 billion.

The company stated that instead of building separate metaverses that are unconnected, it plans to expand into different ecosystems. The announcement further read,

We're gonna build a Gemini experience in different Metaverses, where you can go into Gemini and trade, but it would be immersive instead of on your phone.

Despite the massive round, the twins Tyler and Cameron Winklevoss will retain 75% of the firm. This development from the company comes after the recent rebranding of Facebook into Meta.

As a result, gaming tokens or metaverse-based cryptocurrencies have seen a considerable surge in their market value.

Again on the theme of adoption, a recent BankofAmerica (BoA)survey revealed that one in four analysts believe that Bitcoin price will hit $75,000 in 12 months. 20% of the survey respondents noted that BTC is likely to remain relatively stable between $50,000 and $75,000. In contrast, the rest noted that the big crypto was in for a steep correction to anywhere between $25,000 and $50,000.

More broadly, the survey also noted that 37% of respondents were “long tech,” followed by 21% who were “long Bitcoin.” Overall, the adoption of Bitcoin as a hedge against inflation or as a speculative asset has increased quite a bit in 2021.

While crypto take-up remains strong, the infrastructure bill that the cryptocurrency industry enthusiasts sought seems to have not borne fruit. There have been discussions and fights over the bill, a part of which will make it mandatory for “brokers” to report any cryptocurrency transaction worth more than $10,000.

One area of contention revolves around the fact the bill defines “brokers”, as miners, validators, and wallet developers, for tax purposes. To gain more clarity on the matter, Rep. Darren Soto and ten U.S. Democratic Congresspeople have issued an open letter, expressing concerns over the adverse effects the current bill would have on the cryptocurrency ecosystem and its participants.

Bitcoin price has dropped roughly 20% since its all-time high of $69,000 and shattered the $60,000 psychological level. As BTC hovers around the $56,233 support level, uncertainty is heating up for short-term investors and traders.

Investors should pay close attention to the $53,000 support floor, as a breakdown of this level due to any unforeseen spike in selling pressure could trigger an 8.5% correction to a subsequent demand level at $48,379. 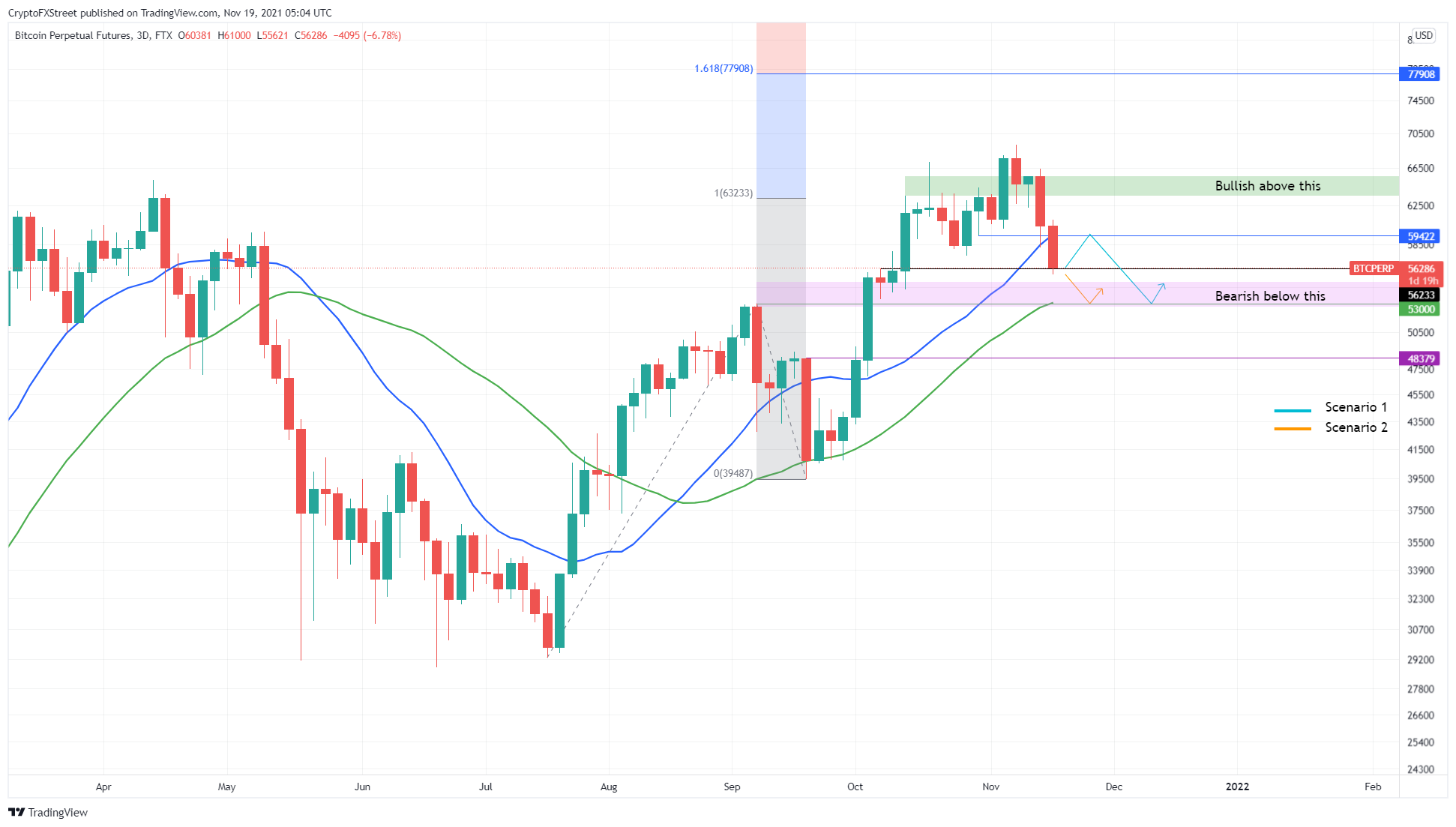 Supporting this short-term bearish outlook for Bitcoin price is IntoTheBlock’s Global In/Out of the Money (GIOM) model, which shows that the most relevant support zone extends from $53,808 to $40,325. Although unlikely, this support area hints at the possibility of a drop to $40,000.

The 365-day Market Value to Realized Value (MVRV) model suggests that there is more to this correction. This on-chain metric is used to determine the average profit/loss of investors that purchased BTC over the past year.

So far, the 365-day MVRV has dropped from 47% to 20%, indicating that a huge chunk of investors booked profits. Although this on-chain metric saw more than a 50% decline, there is still a lot of space before it resets to zero. Hence, market participants should expect another leg down.

While both the scenarios and the on-chain metrics outlined above are hinting at a bearish outlook, a flip of the $60,000 level into a support barrier will hint at the start of an uptrend.

Adding credence to the bullish thesis is Glassnode’s total supply held by long-term holders (LTH) chart. This on-chain metric shows that LTH has only offloaded 100,000 BTC or 0.7% of their total supply of 13.5 million. Suggesting that these investors are not concerned about the ongoing crash. 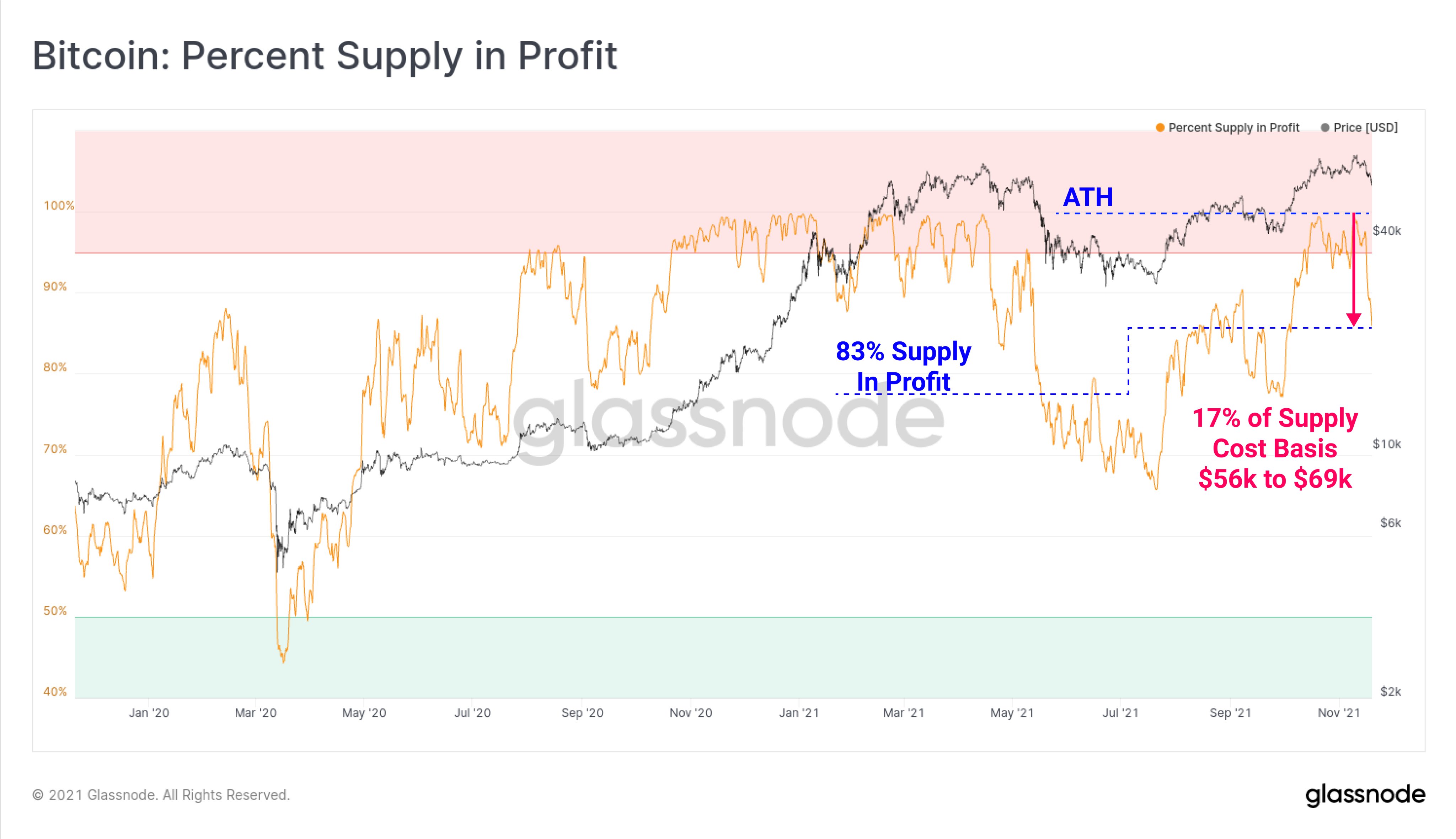 The reason for their carefree attitude can be seen in the chart below, which shows only 3% of the LTH is underwater. This contrasts with short-term investors,  8.3% of whom who purchased BTC since its all-time high at $69,000 are in loss. The distinction suggests the current downswing could be driven by weak hands. 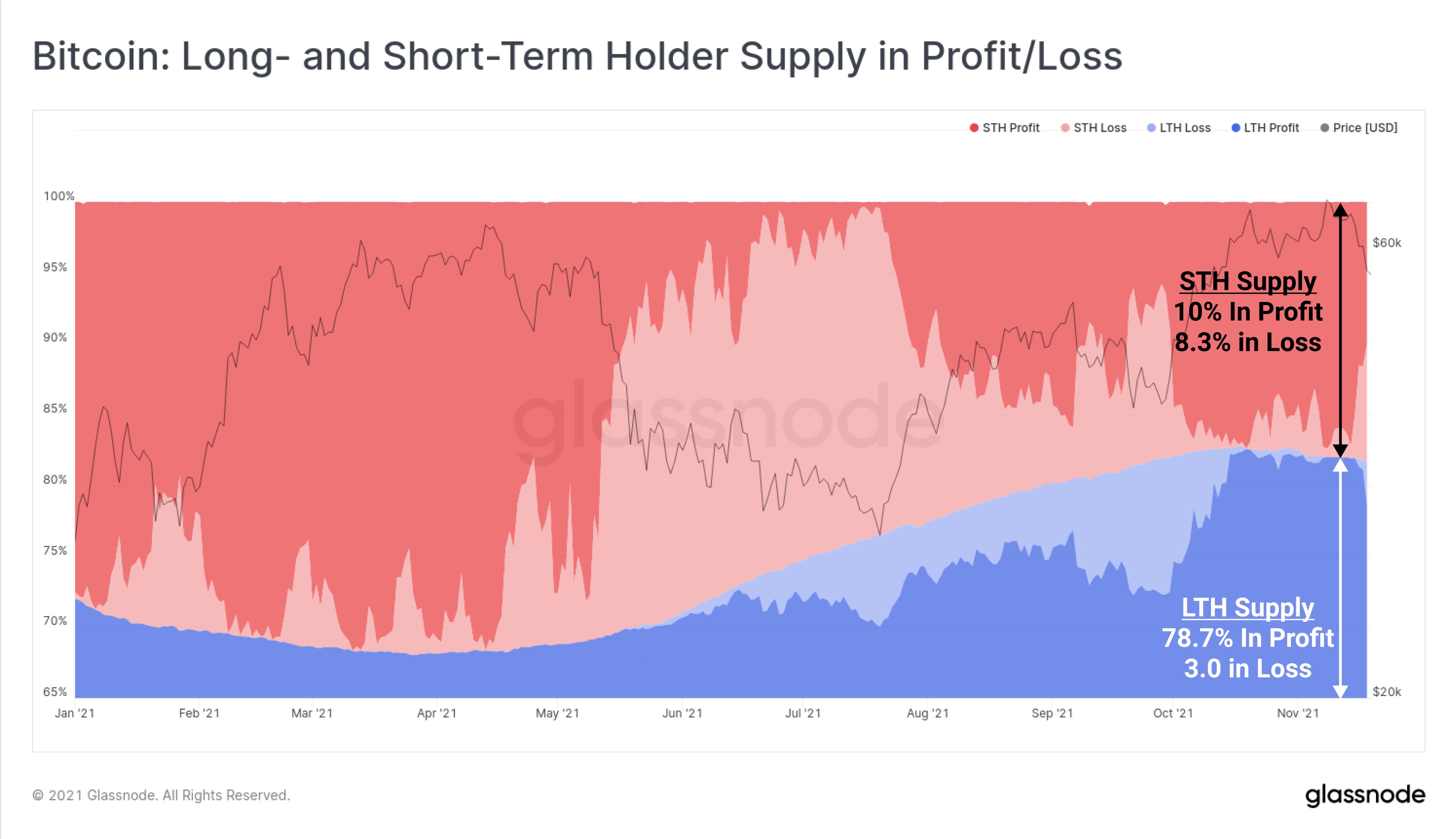 Confirmation of a bullish outlook would come from Bitcoin price producing a daily close above the $63,500 to $65,571 zone. Clearing that crucial level could trigger Bitcoin price to head straight to $77,908, coinciding with the 161.8% Fibonacci extension level.