Traders could not definitively explain bitcoin’s decline; ether falls under $4,000 for the first time since late October. 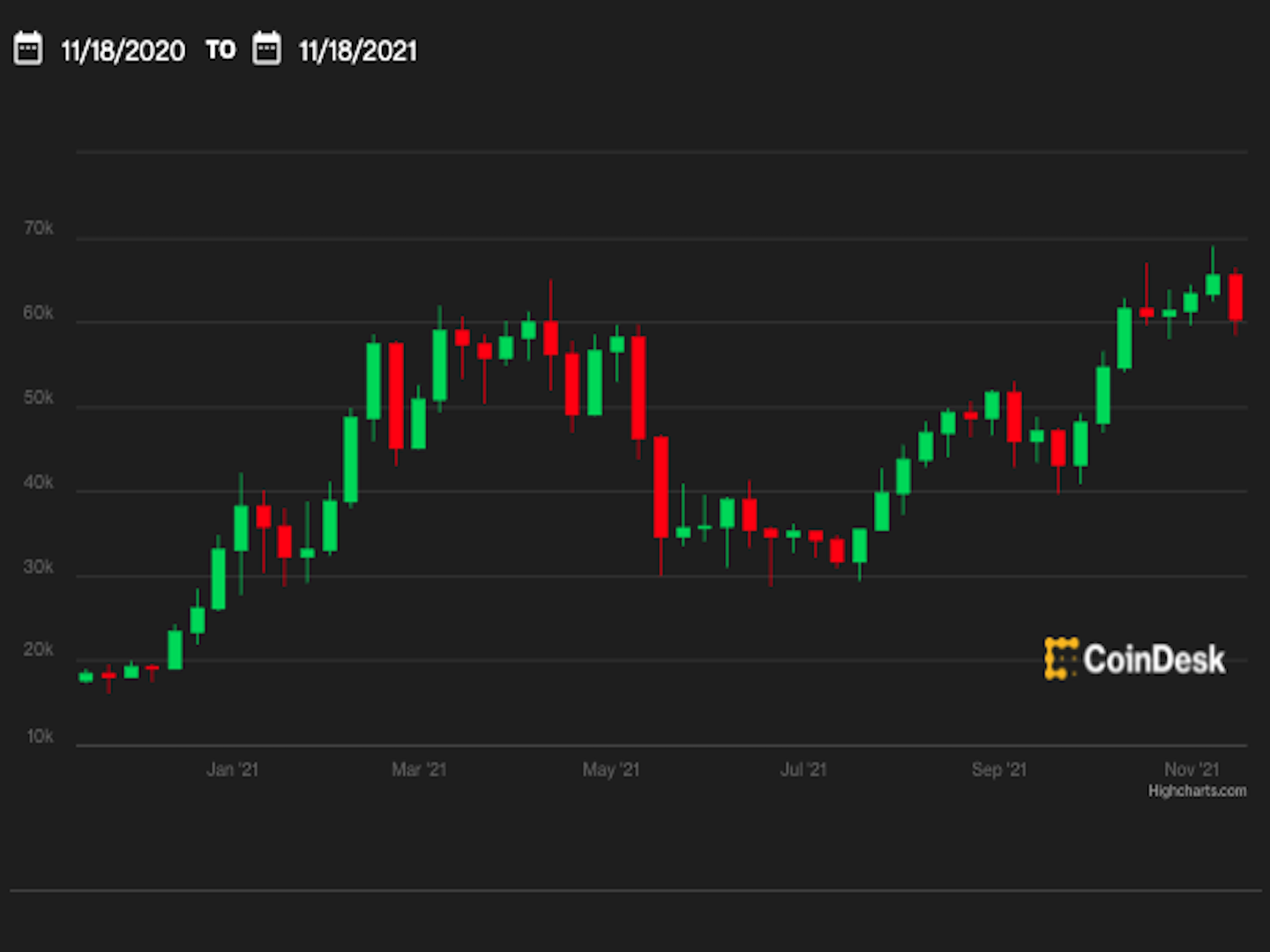 Market Moves: Crypto markets are looking weaker as bitcoin falls below $60,000 and ether loses its foothold over $4,000.

Technician’s Take: Buyers could defend immediate support around $56,000 into Asian trading hours, albeit briefly given strong overhead resistance on the charts.

Bitcoin (BTC) was headed for its worst weekly performance since May as the price of the largest cryptocurrency by market value slid below $60,000.

The price was around $58,000 at press time, down 11.5% since Sunday night, and came amid a broad sell-off in cryptocurrency markets. Ether (ETH) fell below $4,000 for the first time since late October.

Traders were hard-pressed to come up with specific reasons for the latest declines but acknowledged the market is suddenly looking weaker than it was last week when the bitcoin price surged to an all-time high near $69,000.

“The bears will be growing in confidence,” Matt Blom, head of sales and trading for the digital-asset firm Eqonex, wrote Thursday in a newsletter. “Their continual probing of lower levels has so far failed to prove successful, but one close below $58,850 will increase their confidence and prices will move down to $56,670.”

Potential catalysts ahead: U.S. President Joe Biden has said he plans to name his nominee for Federal Reserve chair in the next couple days, and analysts are evaluating which of the two presumed frontrunners – current Chair Jerome Powell or Fed Governor Lael Brainard – might be better for the crypto industry. Factors to evaluate include their stance on how to fight fast-rising inflation and how quickly the U.S. central bank might push to roll out a digital version of the dollar.

There’s also a Sotheby’s auction scheduled for Thursday evening (U.S. time) where a decentralized autonomous organization (DAO) has raised $27 million to bid on one of the last original copies of the U.S. Constitution still in private hands. The event is sure to generate yuks and maybe gasps, if no noticeable change in trader sentiment.

The tone in crypto markets on Thursday contrasted starkly with the optimism seen in traditional markets, where the Standard & Poor’s 500 Index of large U.S. stocks rose to a new record. Tech stocks drove the gains, even as concerns grew among economists that inflation, now running at its highest clip in three decades, might force the Federal Reserve to accelerate interest-rate increases next year to keep the economy from running too hot.

Such monetary tightening might also be a negative for bitcoin because Fed rate increases theoretically would make risky assets – from stocks to cryptocurrencies – less attractive. 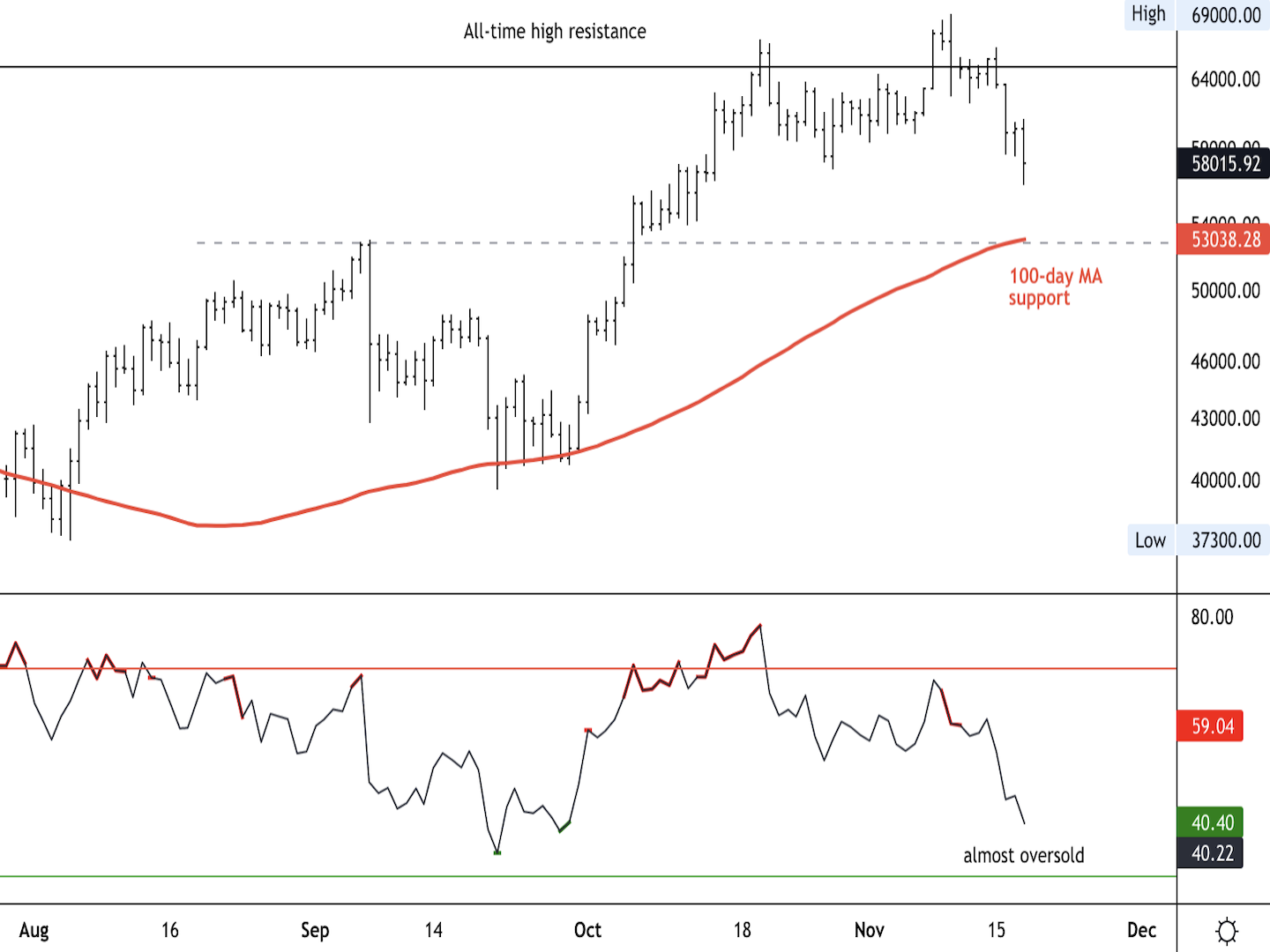 Bitcoin (BTC) fell below $60,000 as sellers remained active over the past few hours, pushing the price to its lowest in three weeks.

Bitcoin’s price retreat came amid a broad sell-off in cryptocurrency markets, with the CoinDesk 20-listed digital assets trading in the red. BTC’s upside momentum continues to slow on the daily price chart, suggesting continued profit-taking among buyers. And the relative strength index (RSI) on the daily chart is not yet oversold, which provides scope for further downside in BTC over the short-term.

The 100-day moving average, currently around $53,000, could attract buyers similar to late September, which preceded a price recovery.

For now, intraday charts appear deeply oversold. This means buyers could defend immediate support around $56,000, albeit briefly given strong overhead resistance on the charts.