The BTC/USD is has reached a new peak of $8,360 at the time of writing before consolidation it's recent gains. This is the dearest price since mid-May. Why is the granddaddy of cryptocurrencies on the rise?

Here are five reasons for the recent rise, followed by the technical levels to watch.

The two influential tech giants have previously cracked down on everything crypto-related. Their recent shift has triggered the most recent rally. Facebook, the social media behemoth, now allows Coinbase, one of the largest cryptocurrency exchanges, to advertise on its platform. Google, the search giant, now includes major coins in its exchange rate converter. Web visibility is essential in bringing fresh money into digital coins.

See: Google and Facebook go back on their position towards cryptocurrencies; Bitcoin, Ethereum and Ripple and Bitcoin Cash react with further gains

3) Moving towards a Bitcoin ETF

In addition to visibility, investing in Bitcoin needs to be more comfortable for casual investors. The Chicago Board Options Exchange (CBOE) has asked for approval to launch a Bitcoin ETF. The request, from one of the most prominent exchanges, joins applications from other companies. The decision is expected later in the summer. An approval will open the floodgates to further investments, and the price of the Bitcoin is already on the rise.

This is one of the reasons that Bitcoin decouples from the rest of the cryptos.

Banks such as Goldman Sachs and JP Morgan have already shown interest in cryptocurrencies and the blockchain technology. However, when a heavyweight $6 trillion fund showed interest, it triggered the beginning of the rally. The mere interest from such a significant investment fund makes a difference. They are not alone.

Blackrock has set up a workgroup that is exploring the field.

Strict and unclear regulation has been crippling the prices of cryptos. And now, the US Chamber of Commerce, a body of the US government is calling to clear regulation uncertainty.  They say that raising capital to start companies has become difficult. They call on both the SEC and the CFTC to get their act together. A more accommodating regulatory environment also gives Bitcoin a boost.

See: The US Chamber of Commerce requests the SEC and the CFTC to clear regulation uncertainty

The price of Bitcoin surges almost every summer. This is a seasonal pattern with a good track record. The leap of 2017 was the largest, but the previous years also saw considerable upswings. And while the BTC/USD makes more substantial moves in July than in August, the gains so far are pale in historical perspective.

See: Summer surge surprise? No, it's a recurring pattern, and it may be only the beginning 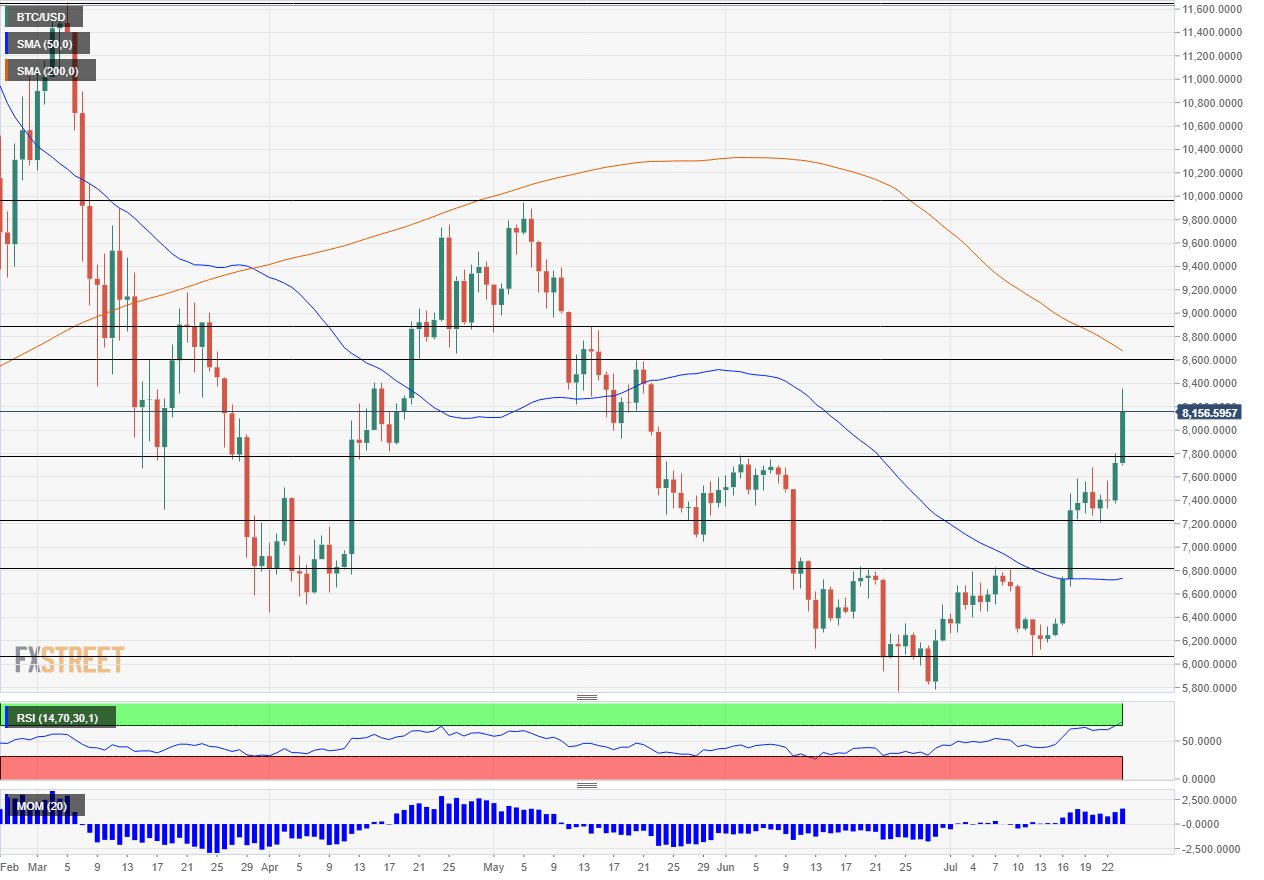 Looking up, $8,614is a critical level after capping Bitcoin in late May. It nearly coincides with the 200-day Simple Moving Average. Further above, $8,901 was a cap for the pair earlier in May.

The next line of resistance is already much higher, at $10,000. Not only is it around, psychological level, but also the place where the cryptocurrency turned down in early May. Even higher, $11,650 was a high point back in March.

Looking down, $7,783 held Bitcoin down in early June and now works as support. $7,250 was a low point in early July and retains its role. Lower, $6,824 is a double top after serving as resistance in July and in June.

Indicators: The BTC/USD enjoys upside Momentum, but the Relative Strength Index (RSI) is already touching 70, which is the overbought territory. It is trading above the 50-day Simple Moving Average but still below the all-important 200-day one.