The largest futures exchange, CBOE is reported to have filed for a Bitcoin ETF with the United States Securities and Exchange Commission (SEC). This move is to help the exchange extend Bitcoin trading to public investors. The filing states that CBOE is going to make the investment in Bitcoin for its customers. It will also coordinate over-the-counter (OTC) trades, besides the funds put in Bitcoin by investors will be insured. A section of the filed document reads:

“According to the Registration Statement, the Trust will invest in bitcoin only. The activities of the Trust are limited to: issuing Baskets in exchange for the cash and/or bitcoin deposited with the Cash Custodian or Trust, respectively, as consideration; purchasing bitcoin from various exchanges and in OTC transactions; delivering cash and/or bitcoin in exchange for Baskets surrendered for redemption; maintaining insurance coverage for the bitcoin held by the Trust; and securing the bitcoin held by the Trust.”

CBOE is not the only institution that has filed for Bitcoin ETF with the SEC; SolidX, as well as Gemini (Winklevoss twins), have also done the same. The SEC rejected other application last year due to price manipulation and the fact that most markets overseas are unregulated. Even countries like Japan still lack policies to govern the crypto market at the moment. However, the Japanese government has been making tremendous progress with the regulations and it is working on unifying regulations for the G20 group of countries.

If a Bitcoin ETF is approved, the market could start witnessing new capital streams into the industry. The trading volumes are bound to increase and there will be ripple effects on the prices of digital assets across the board starting with Bitcoin.

Bitcoin price has broken out of the rising wedge pattern and is currently trading below $6,500. The entire cryptocurrency market is bleeding at the moment and BTC/USD is down 2.9% on the day. The support zones at $6,700 and $6,600 failed to hold ground, but the buyers entered above the stronger support at the 61.8% Fib retracement level with the last swing high of $6,784 and a low of $5,775 at $6,400. The trend is strongly bearish and Bitcoin is likely to settle in a bearish flag pattern with a short-term immediate support at $6,440. 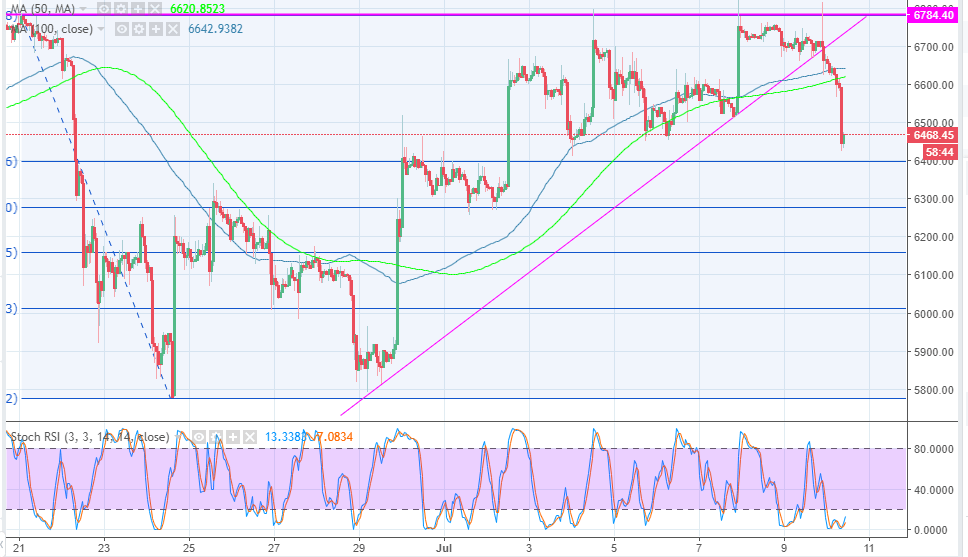