Bitcoin price is balancing above $21,000 amid pressure from some of the ongoing macro events in the market. The Federal Reserve's FOMC meeting on Wednesday will decide whether to increase the interest rate again and by how many basis points.

In addition, the Securities and Exchange Commission (SEC) has launched an investigation into Coinbase's listing process, which may also affect the crypto market and BTC price. From a technical point of view, Bitcoin price may face heightened volatility toward the end of the week, with FXStreet's analysts forecasting another decline.

The United States SEC has started investigating Coinbase for allegedly allowing buying and selling of several tokens considered to be securities. According to Bloomberg, three people familiar with the regulator confirmed the investigation.

Coinbase came under the SEC's radar after it reviewed its listing guidelines to bring up the number of tradable instruments on the platform. As per two sources quoted by Bloomberg, the probe started before the regulators decided to look into an insider trading scheme in the company and last week's case against a former manager. Although the SEC is yet to comment on the matter, Paul Grewal, the chief legal officer, wrote on Twitter:

"We are confident that our rigorous diligence process – a process the SEC has already reviewed – keeps securities off our platform, and we look forward to engaging with the SEC on the matter."

The flagship cryptocurrency is holding slightly above the lower boundary of a bull flag pattern. If this chart formation is allowed to run its course, BTC price will likely reverse the trend and break to the upside, with $22,000 and $24,000 levels in sight.

A bull flag pattern often forms during a correction from a higher price point. As the asset consolidates, buyers eventually overwhelm outstretched sellers, shifting the scales in their favor. As shown by the arrow in the chart, a break above the pattern would be accompanied by increased trading volume, further bolstering Bitcoin price to the levels mentioned earlier at $22,000 and $24,000. 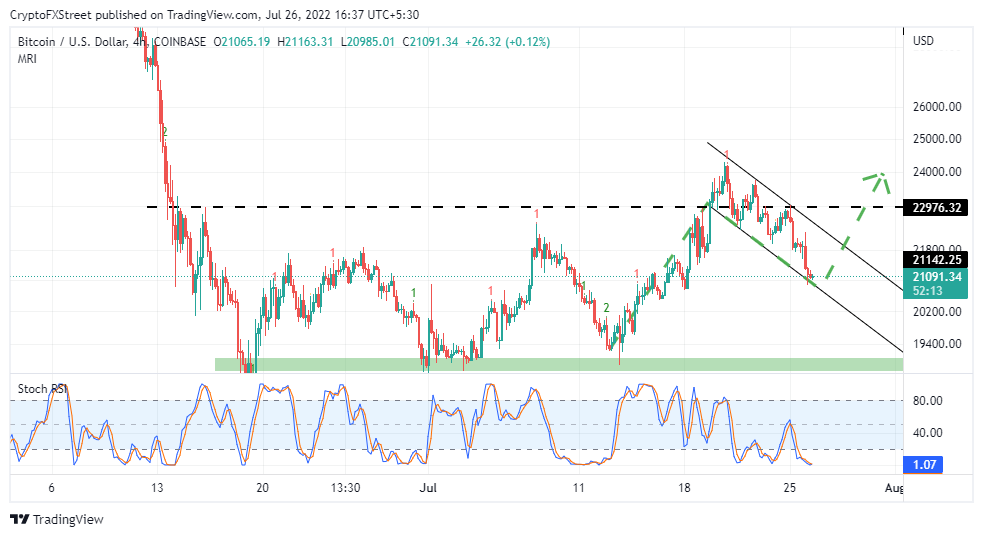 It is worth taking note of the extremely oversold Stochastic RSI, which provides further bullish confirmation. BTC price is bound to start regaining momentum the moment this technical index lifts above 30. Bullish divergence will be seen as the RSI crosses above the moving average. Historically such moves have confirmed significant trend reversals higher.

The above chart illustrates the market value realized value (MVRV), which measures if the market is overvalued or undervalued. Note that a rebound is predicted to come into play with the on-chain metric sliding below the mean line. According to the 30-day moving average, dips into the negative region have always paved the way for bullish outcomes.