Bitcoin has seen a decrease in its upward momentum, especially since its recent crash that caused liquidations worth more than $2.3 billion. While the crash might be bearish in the short term, it will not hinder BTC’s performance in the long run.

The flagship cryptocurrency has witnessed a monumental surge of over 300% in 2020 and a whopping 77% increase from its previous all-time high of roughly $19,700. While prices seem to have peaked at nearly $35,000, a particular on-chain metric suggests that BTC has more room to go up.

The net unrealized profit/loss indicator is an on-chain metric that considers investors’ holdings against the price at which the asset was last purchased or moved. Also known as NUPL, this gauge helps understand investors’ sentiment and investments, thereby determining if the market is undervalued or overvalued. 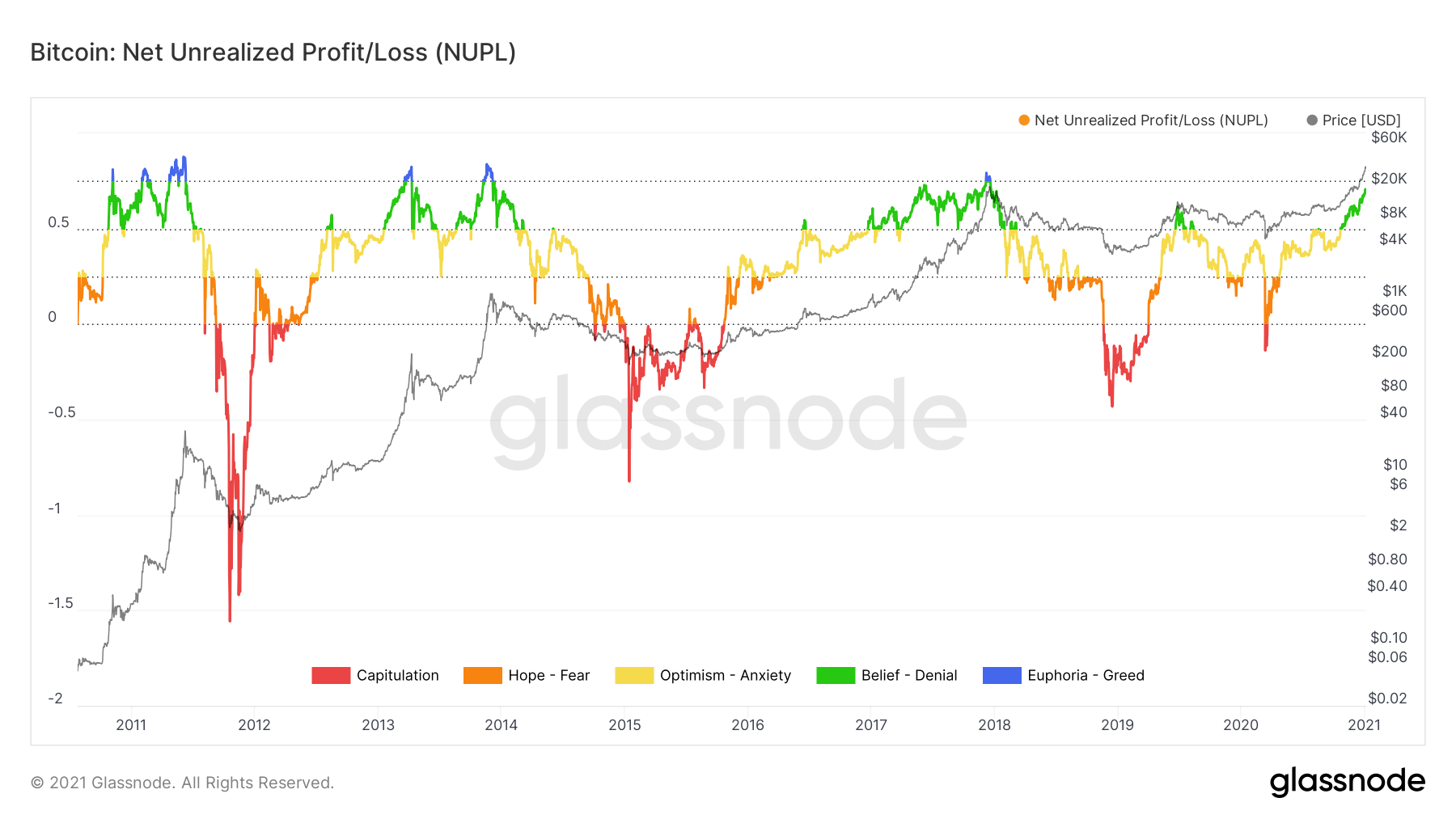 At the time of writing, the NUPL indicator hovers at a value of 0.6936, suggesting that the cryptocurrency enthusiasts are in a state of “belief.” Following such a stage in the psychology of a market cycle comes the euphoria phase. This is characterized by a period of parabolic growth that tends to lead to market tops.

If history were to repeat itself, Bitcoin price could mirror its previous performance, translating into a market value of $235,000 per token.

BTC’s foray into the six-digit territory: True or false?

While a $235,000 Bitcoin may seem infeasible, several fundamental factors support such exponential growth.

These factors hypothesize the need for BTC as an investment vehicle, not just for retail but also for institutional investors. Hence, the inflow of capital into the cryptocurrency market adds credence to the NUPL indicator, and it isn’t far-fetched for a $200,000 Bitcoin.

VET ready for a rebound after bloody correction

VeChain price witnessed a brutal 45% sell-off that kicked off on February 12. Although VET crashed as low as $0.033, market participants are aggressively buying the dips.

Elrond price broke down from a descending triangle as it sliced through the $126 support barrier. If sellers continue to pile up, then the reversal pattern forecasts a downswing to $74. Declining developer activity adds credence to EGLD’s bearish outlook.

The cryptocurrency market is in bloodshed on Tuesday during the European session. Algorand has not been spared from the battering, which has led to massive losses.

Litecoin recently abandoned the journey to all-time highs following a barrier slightly under $250. The correction has proved difficult to stop, with Litecoin losing various tentative support levels like $220 and $200.