The CEO of Binance, Changpeng Zhao is imagining a scenario where Bitcoin has a market capitalization of $2 trillion. In his opinion, such a massive market cap would easily place the price per BTC at $100,000. One factor that could send Bitcoin’s market share to such levels is the ongoing printing of money by central banks around the world in a bid to avert potential economic crises amid the Coronavirus pandemic.

As we get used to talk about Trillions, a modest $2 trillion market cap of #bitcoin will put 1 BTC at $100,000. Not such a hard to imagine number now, right?

As most BTC are not for sell (HODLers), we only need a small portion of that $2t to buy to reach it.

At the time of writing, Bitcoin is trading at $6,701 on Wednesday. It is still trading in red with losses amounting to 0.95% on the day. Upward movements have been limited following the resistance at $6,800 on Tuesday. Meanwhile, the path of least resistance remains to the south. However, the shrinking volatility suggests that rapid movements are unlikely in the coming sessions.

Resistance one: $6,741 – Highlighted by the previous 15-minutes high, the previous 1-hour high and the Bollinger Band 15-mins upper curve.

Resistance two: $7,020 – The previous week high and the pivot point one-day resistance one converge in this zone. 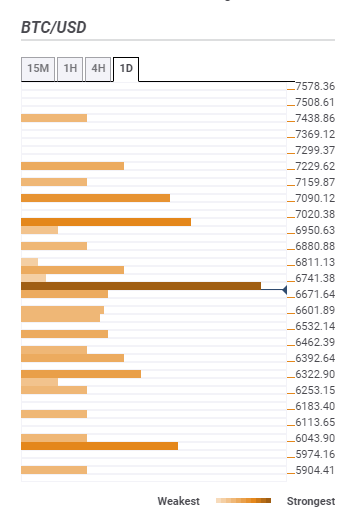 BTC breaks its ties with stocks, strives to return its safe-haven status

Most part of the week Bitcoin has been on the recovery path. Slowly but surely the coin left $6,500 behind and even tested waters above $7,000. However, the buyers failed to develop an upside momentum above the critical resistance and the coin returned to $6,900 by press time.

Ripple has remained relatively bullish from Monday this week following a breakdown over the weekend. XRP/USD refreshed the levels around $0.16 before focusing on recalling the ground towards $0.20.

ETH/USD is changing hands at $144.50. The second-largest digital asset has gained nearly 4% in the recent 24 hours amid Bitcoin-led recovery on the cryptocurrency market.

IOTA, now the 24th largest digital asset with the current market value of $429 million and an average daily trading volume of $12 million. At the time of writing, IOT/USD is changing hands at $0.1528.

Most part of the week Bitcoin has been on the recovery path. Slowly but surely the coin left $6,500 behind and even tested waters above $7,000.