Bitcoin hit $40,000 again on Friday but could not sustain the uptrend. Thus, a reversal came into the picture. Following the correction, BTC hit sub $34,000 before allowing for the ongoing recovery. The least resistance path seems upwards, for now, as the bulls aim to close the weekend session above $40,000.

The pioneer cryptocurrency is exchanging hands at $37,363 and within an ascending parallel channel. On the upside, bulls are working to overcome the selling pressure at $38,000, which will pave the way for testing the channel’s middle boundary.

Simultaneously, the Relative Strength Index has validated the bullish outlook with the reversal above the midline. Continued action toward the overbought region will call for more buy orders.

Bitcoin is known for moving significantly over the weekend. Therefore, if enough tailwind behind it, gains above $40,000 are a conservative prediction. Besides, a daily close above the midline may help add weight to the bullish narrative.

The bullish outlook has been validated by the confluence detector tool, revealing no significant resistance ahead of the largest cryptocurrency. On the downside, robust support is holding Bitcoin in place, perhaps assuring investors that the corr3ection is unlikely in the near term.

This initial support calls $37,116 home and is highlighted by the 4-hour previous high, the 4-hour Bollinger band middle boundary, the SMA ten 15-minutes, and the one-month pivot point support one. 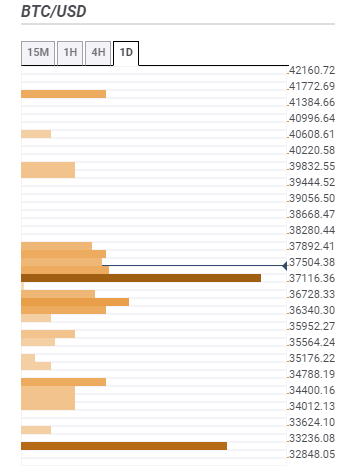 It is worth mentioning that Bitcoin’s downtrend will resume if the price closes the day below $38,000. Selling orders will surge on breaking under $37,000. BTC/USD could seek higher support at $34,000. However, $30,000 is still within reach.

Bitcoin: Bull rally remains strong in the long-term according to technicals

Bitcoin price has been extremely volatile in the past week. MicroStrategy has continued to accumulate even more BTC despite the fall in prices. Bitcoin's rally remains strong as the digital asset continues to defend critical support level.

Ripple needs to crack critical 21-DMA for a rally towards $0.60

XRP/USD in search of a fresh direction while ranging between 21 and 50-DMAs. The No. 7 coin forms higher highs on the 1D chart, suggesting a potential upside break. RSI trades flat at the midline, the bulls need to crack only this one barrier at $0.4905.

Cardano: Rejection at 100-HMA calls for a test of the $1 mark

Cardano (ADA/USD) extends Friday’s sell-off, as the bearish momentum picks up pace on Saturday, with deeper losses likely on the cards. The fourth most widely traded crypt currency has lost 19% of its value over the past seven trading sessions.

Ethereum: Primed for swift recovery as the network prepares for a major update in July