The current Bitcoin price uptrend has not been explained until now. Clem Chambers believes that the surge was caused by an influx of the Chinese currency. The CEO of ADVFN says that the scrimmage existing between the United States and China is likely to push Bitcoin towards becoming a preferred currency for wealthy individuals as they hedge against the trade war between the two nations.

Many analysts in the cryptocurrency space have tried to demystify the reason behind the Bitcoin surge. However, the Chambers suggests that they are not correct. The situation in China, according to Chambers is the catalyst for the price surge. While writing for Forbes, Chambers stated:

“However, what caused the sudden unexplained spike is now clear to me. It is [the] Chinese devaluation, the insider reaction to imminent, planned, significant and perhaps rolling Chinese currency devaluation that set off this rally. It was a group of insiders buying bitcoin for Chinese yuan before the devaluation that took place two days later struck. This devaluation process has been going on for weeks, but it accelerated last week.”

The move to dump the Chinese currency led to a rise of Bitcoin buy orders. The individuals using Bitcoin to hedge against the current currency devaluation are possibly unawares that they are the reason behind the spike. Chambers is inclined to believe that the current standoff between the two governments could elevate Bitcoin above gold as an alternative store of value. Chambers while referring to the dispute says:

“If the trade wars go into meltdown, then bitcoin will ‘moon’ because huge amounts of Chinese currency will be swapped for BTC as the yuan-denominated super-rich move to be hedged from the wealth privations of devaluation. Bitcoin, not gold, is and will be the asset they will run to first.”

Bitcoin price is trading at $8,215 at the time of press. The price exchanged hands above $8,400 during the Asian trading hours today. The crypto seems to have found a support around $8,200, similarly, the path of least resistance is to the upside. The buyers are looking forward to $8,300 while $8,400 is the critical resistance level. 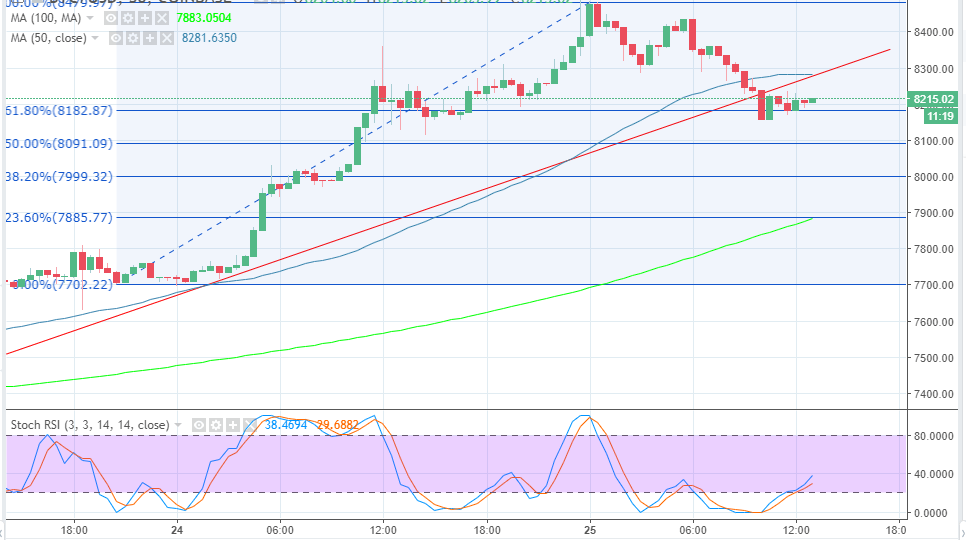