Bitcoin has continued to record new all-time highs and most recently surpassed $64,000.

According to on-chain analytics firm Glassnode, the market has started constructing new on-chain support. Over 245,000 Bitcoin have moved on-chain at prices above $62,700.

The UTXO Realized Price Distribution shows at which prices the current UTXOs were created. In the previous $1 trillion consolidation zone, while Bitcoin was trading between $53,000 to $60,000, 1.9 million BTC were moved on-chain. 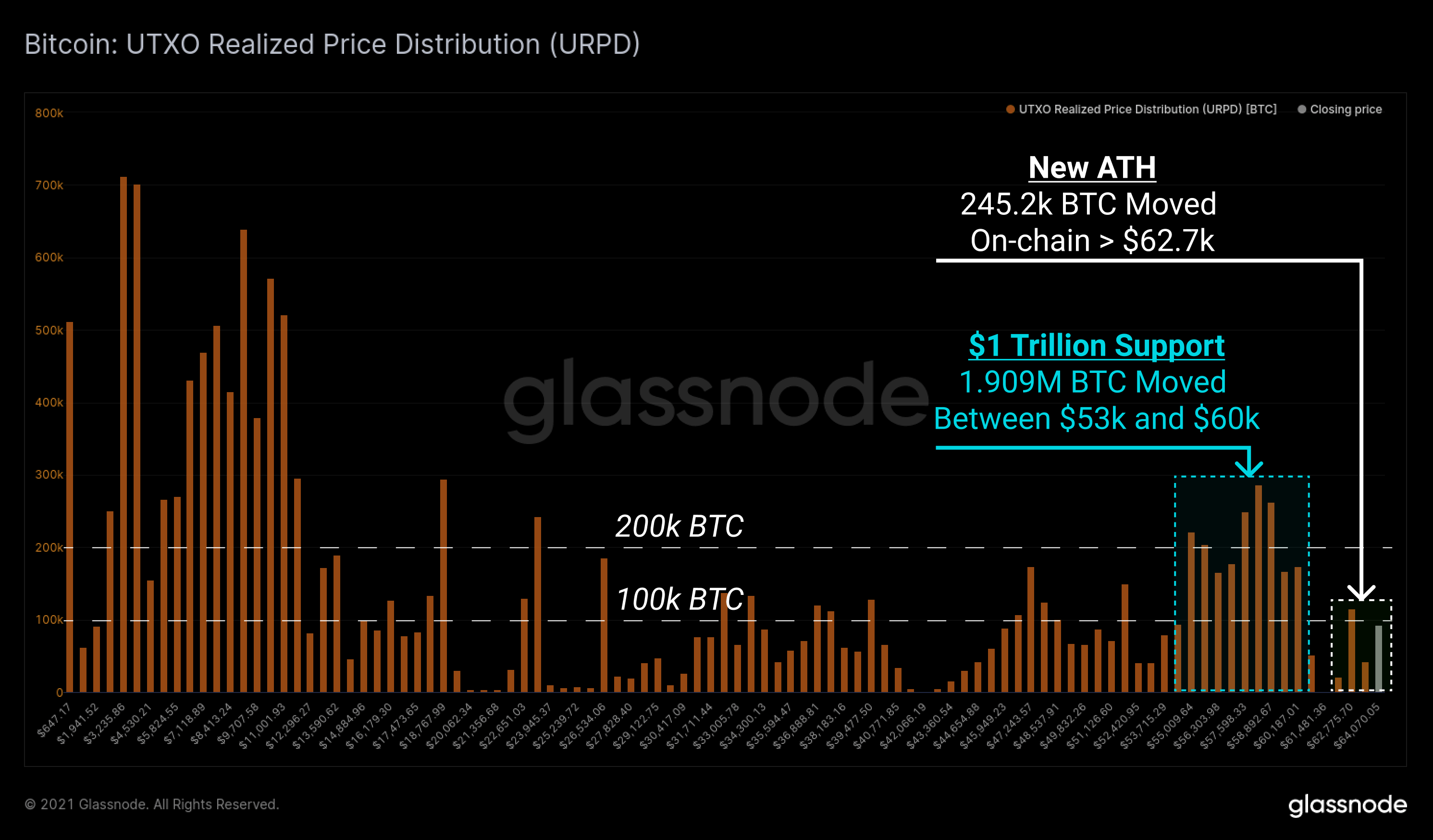 While Bitcoin has managed to find support at $62,000, crypto behavioral analytics platform Santiment found that the number of whale addresses is at 2021 lows. However, smaller addresses are increasingly being created.

Despite a decline in whale addresses, Bitcoin whale transactions have increased as the cryptocurrency reached record highs.

Market sentiment toward Bitcoin has also skyrocketed in the past 24 hours, shifting from “relatively bearish to overwhelmingly bullish” for the first time in two months. However, according to historical data, extremely bullish sentiment led to corrections in the past. Santiment’s data suggests that Bitcoin is approaching “peak hype,” which could mean that further consolidation could be in the cards.

Bitcoin's perpetual contract funding rate also rose in tandem with its price, reaching as high as 0.1% on Binance. In the recent rally, Bitcoin longs are paying shorts, as sentiment is extremely bullish. However, high funding rates have marked each Bitcoin cycle top, indicating “fast-rising bullish bias and a market full of overleveraged longs,” according to Santiment.

Bitcoin could be aiming for further price appreciation

After reaching its record high, the recent Bitcoin correction was also likely due to a spike in Bitcoin’s Network Realized Profit/Loss (NPL), suggesting that investors are increasingly taking profit. The pioneer digital currency’s inability to surpass $65,000 was likely due to sell-offs and profit-taking.

However, Bitcoin price could still be aiming for further growth, as both Bitcoin’s short-term and long-term MVRV ratios remain relatively low. The higher the MVRV ratio and the more unrealized profits – the higher the chance Bitcoin holders could begin to take profit and reduce their exposure.

Santiment further suggests that although overall trends point to further Bitcoin price appreciation, a short-term correction may be needed for the market to properly normalize.