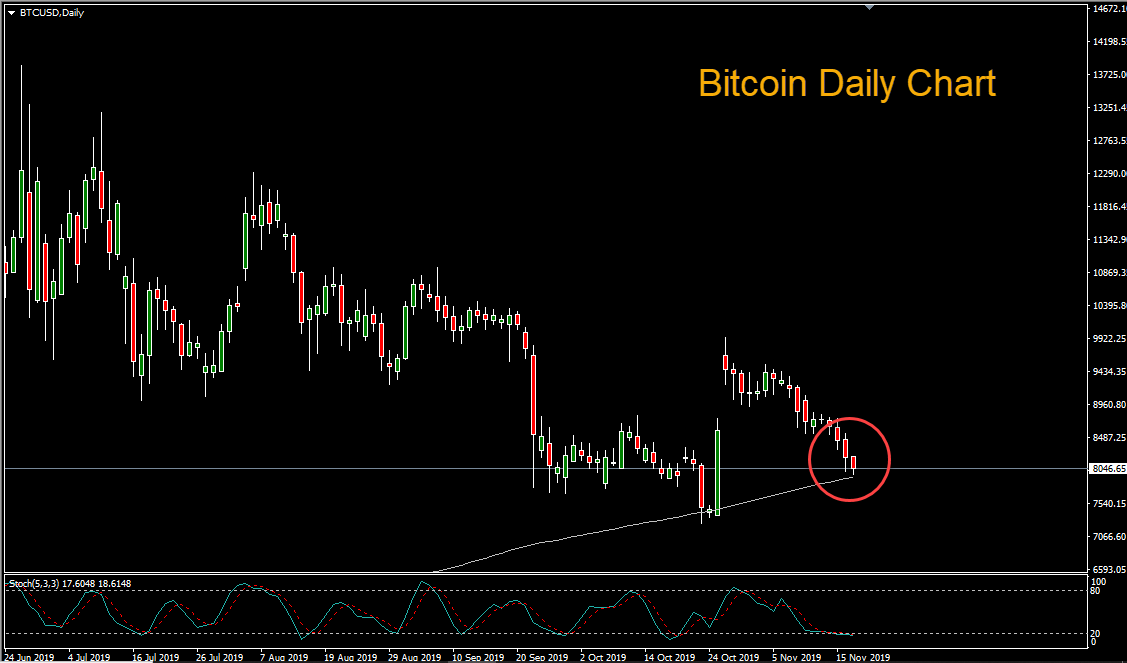 Bitcoin sank to its lowest levels since October 25th in Tuesday trading, dipping below the $8,000 level. The world’s leading cryptocurrency may have been rattled by news of Google’s entry into the financial services business with its new project, code-named Cache. Last Wednesday, the search giant announced plans to offer ‘smart’ checking accounts to customers as soon as next year. Google has partnered with Citigroup to develop the checking accounts which will be linked to the Google Pay app.

“If we can help more people do more stuff in a digital way online, it’s good for the internet and good for us.”

He added that the company is not planning on selling the financial data of its checking account users.

Meanwhile, Bitcoin evangelists dismiss Google Cache as a threat, insisting that the project will not undermine the need for a decentralized global currency. Digital asset strategist Gabor Gurbacs at VanEck expressed his doubts over the threat to Bitcoin on Twitter:

“When big banks, big tech and big governments join forces on controlling money, then only one realizes the true need for sound money. #Bitcoin and #gold have never been more important in monetary history.”

Looking at the Bitcoin daily chart we can see price has fallen to the ‘line in the sand’ 200 period simple moving average. The next level of potential support stands at the prior low of 7,731.

Bitcoin price attempt to climb the ladder above $7,000 was met by increased selling activities in the zone between $6,800 - $6,900. This left the psychological zone at $7,000 untested, however, the area remains critical to Bitcoin price near term trend.

NEO/USD struggles to settle above $7.00 as the upside momentum fades away

NEO, now the 2nd largest digital asset with the current market value of $492 million, is hovering around psychological $7.00. The coin has gained over 2% on a day-to-day basis, however, the upside momentum has faded away during early Asian hours.

Ethereum Price Analysis: ETH/USD has to decide where from here

Ethereum, the second-largest digital asset with the current market value of $15 billion, the tested area above $142.00 before retreating to the current levels.

Ripple (XRP) has been the best-performing altcoin out of top-20 in recent 24 hours, The coin tested $0.1800 during late Thursday hours and managed to settle above $0.1700 on Friday. Ripple's total market capitalization is registered at $7.5 billion.