Band Protocol is crowing the weekend with a remarkable recovery. Following losses from $7.5, support was embraced at $5.8. Over the last few days, the progress made can be attributed to the support Band Protocol is receiving after a successful mainnet launch. At the time of writing, the token is trading at $6.4 amid a fast building bullish momentum.

It is barely a week since Band Protocol had a successful mainnet launch. The upgrade from Wenchang to GuanYu has brought forth several features. For instance, GuanYu allows validators to fulfill data requests in return for a portion of the fee from our partners and developers that have integrated Band Protocol."

The most vital feature of the upgrade is support for "permissionless creation of customizable data scripts that can query public and permissionless data sources." The scripts also leverage decentralized networks from more than 67 validator nodes.

Marginally above $6.4, BAND is dealing with seller congestion highlighted by the 50 Simple Moving Average (SMA) in the 4-hour timeframe. The 200 SMA supports the immediate downside.

Consequently, the bullish outlook is emphasized by the Relative Strength Index (RSI) as it grinds to the overbought area. Trading above the 50 SMA would boost BAND towards the crucial resistance at $7.50 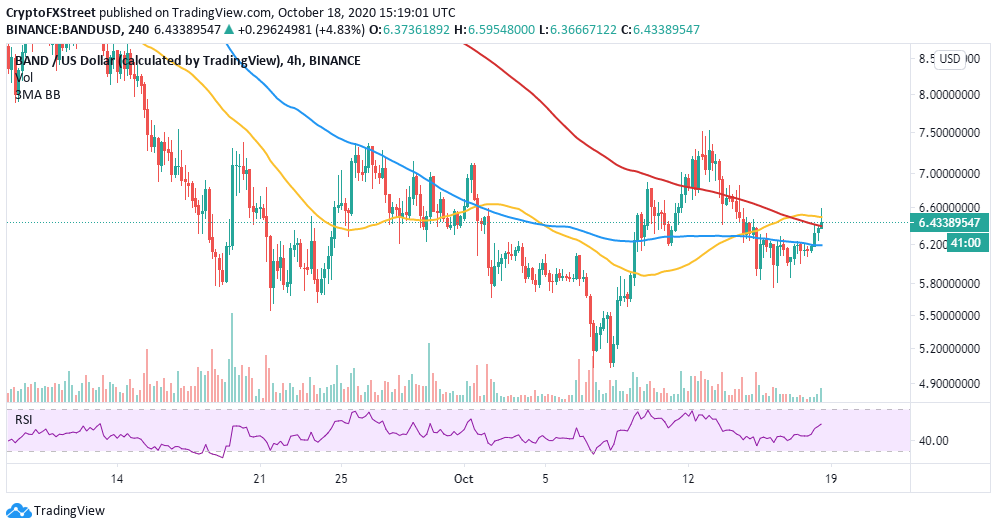 IntoTheBlock's IOMAP model suggests that the path to $7.5 is relatively smooth due to the lack of strong resistance. However, bulls must prepare to slice through the subtle supply at $6.5 - $6.7. Here, 646 addresses previously brought approximately 271,000 BAND. On the downside, immense support exists between $6.1 and $6.3. Earlier, 369 addresses almost 3.5 million BAND. It is unlikely that bears will penetrate this zone and push BAND to $5.

It is worth mentioning that the bullish outlook would be invalidated if the 50 SMA resistance remains intact. Moreover, the immediate support at the 200 SMA does not seem strong enough to hold BAND if a reversal comes to the picture. The most formidable support lies at $6.2 and last week's anchor at $5.8.

China prohibits units and individuals from creating and selling cryptocurrencies

The new draft of legal comments clearly states that no individual or unit can produce or sell tokens to replace CNY in circulation in the market. The violation of this law will have severe consequences according to the draft.

Uniswap has been in a downtrend for several weeks now while bulls attempt to see any kind of rebound. The digital asset seems to be facing a crucial resistance point. Let’s take a look at several indicators and patterns to determine the direction of the price.

Yearn.Finance Price Prediction: YFI looks poised for a breakout towards $20,000

YFI has been trading inside a massive downtrend since September 12 and formed a head and shoulders pattern that broke bearishly. After losing close to 70% of its value over one month, the digital asset seems ready for a massive rebound.