This has never happened before, and yet here we go again

bZx fell victim to another hack attack due to the structural flaw. According to the information on the project's website, the network experienced a token duplication accident on the protocol TVL. The team noticed strange activity on the iToken contract and instantly paused the minting and burning of iTokens. The team claims that they removed the bug and recovered the funds from the insurance fund.

The insurance fund is backstopped by both the token treasury in addition to protocol cash flows. As we have demonstrated before, the system can absorb black swan events that would otherwise negatively impact lender assets. Thanks to a protocol design that anticipates and accounts for tail events, this incident is surmountable. The debt will be wiped clean, and the protocol will move forward unimpeded.

While the team explains how it is well-equipped to cope with difficulties, it is worth remembering that the protocol was already hacked twice in February 2020. The attackers launched two successful hacks just days apart. They resulted in an aggregate loss of around $954,000. The first attack took place when the team was at the ETHDenver industry event, and the second took place a couple of days later. The hacker used multiple DeFi protocols to lend and swap significant ETH and wrapped Bitcoin (WBTC) and manipulate.

This time the hack attack cost the project about $8 million in multiple coins, including LINK, ETH, USDT, USDC, and DAI, which is 30% of bZX's Total Value Locked (TVL).

While no financial harm was done to the users, this incident raises questions about the safety of bZx and DeFi protocols in general. The project passed may audits and verifications; however, none of the efforts guaranteed that it was totally safe.  According to Aave Protocol Founder Stani Kulechov, it is something that DeFi user should consider while dealing with  DeFi.

Some Twitter users praised the team for transparency and fast reaction.

I really respect that.

Another hack, but another refund.

Innovation can be costly sometimes, but the team stands strong and protects consumers.

Some will say “that’s DeFi, get rekted”. Not bZx. https://t.co/uKMjHByy6z

However, the question remains: will bZx stay afloat after it has been compromised three times in less than a year, and incurred such significant losses?

BZX, the native token of the protocol, lost nearly 30% in the last 24 hours to trade at $0,445442 by the time of writing. The coin just broke below the upside-looking consolidation channel and extended the decline amid high trading volumes. This development bodes ill for the price and implies that it may retest the recent low of $0.37 before the selling pressure slows down. If this barrier holds well, the coin may recover and retest the broken channel support (currently at $0.6154).  A sustainable move above this area is needed for the upside to gain traction and negate the immediate bearish scenario. Otherwise, BZX will resume the sell-off. 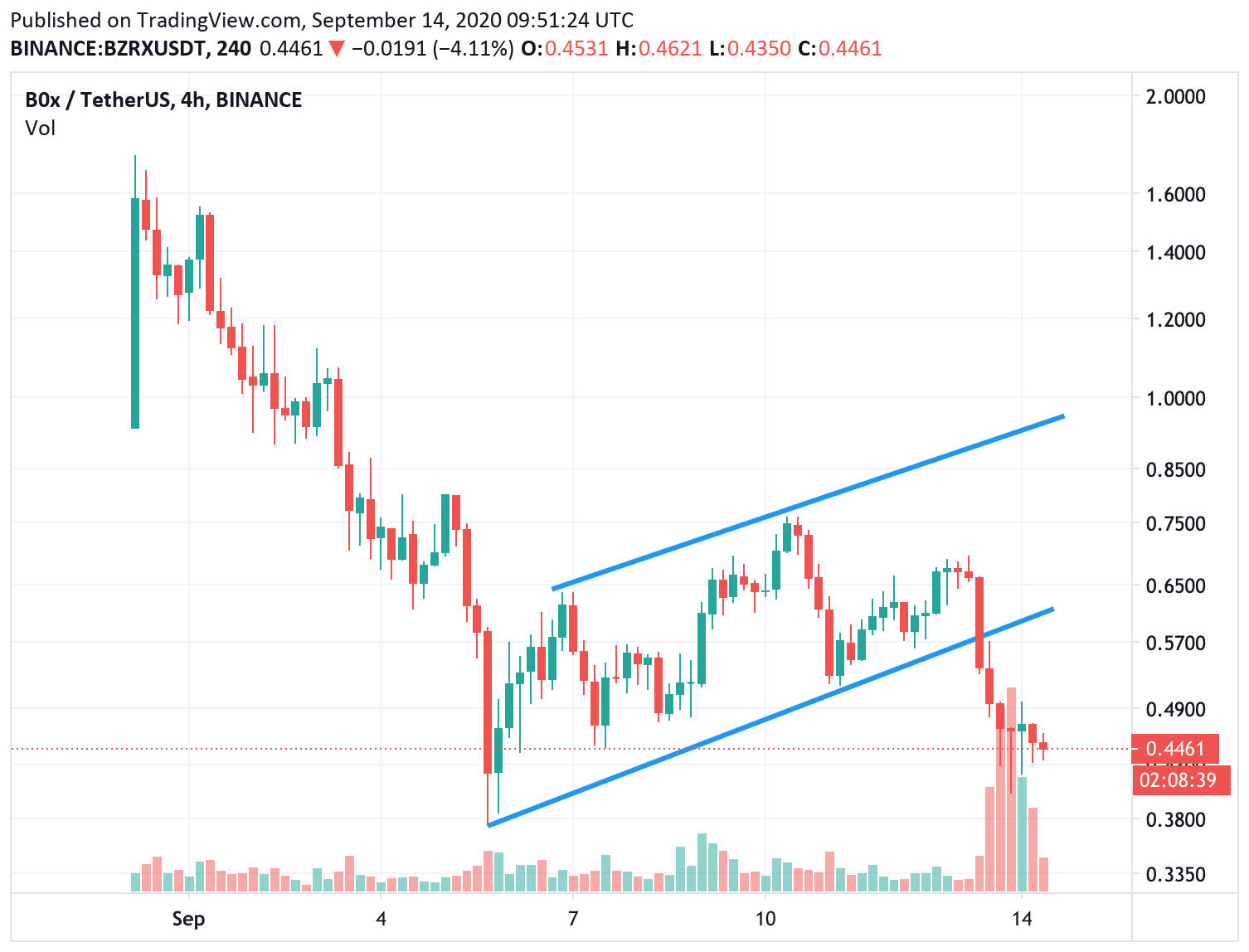