Cardano price whipsaws buyers and sellers during the weekend trade session. News regarding Cardano's partnerships with Dish Network and Chainlink generated a substantial spike higher, but bulls failed to rally beyond some key resistance levels.

Cardano price spikes on Dish Network partnership but fails to rally as sellers push Cardano lower by -12.7% from the weekend highs

Cardano price experienced a significant bullish spike over the weekend, easily outperforming much of the selling pressure that affected the broader cryptocurrency market. However, the Kijun-Sen at $2.49 and the top of the Cloud (Senkou Span A) at $2.46 acted as resistance and halted further upside momentum. Despite creating a new weekly high, sellers pushed ADA from $2.46 to $2.14.

The trading range for Cardano price is likely to be constricted until a clear directional move is established. ADA primary near-term resistance is the 38.2% Fibonacci retracement at $2.28, while the primary support level is the daily Tenkan-Sen at $2.18. While the resistance above at $2.50 remains, the immediate support below $2.18 is the 50% Fibonacci retracement and Senkou Span B at $2.06 – this is a challenging area for sellers to close below. 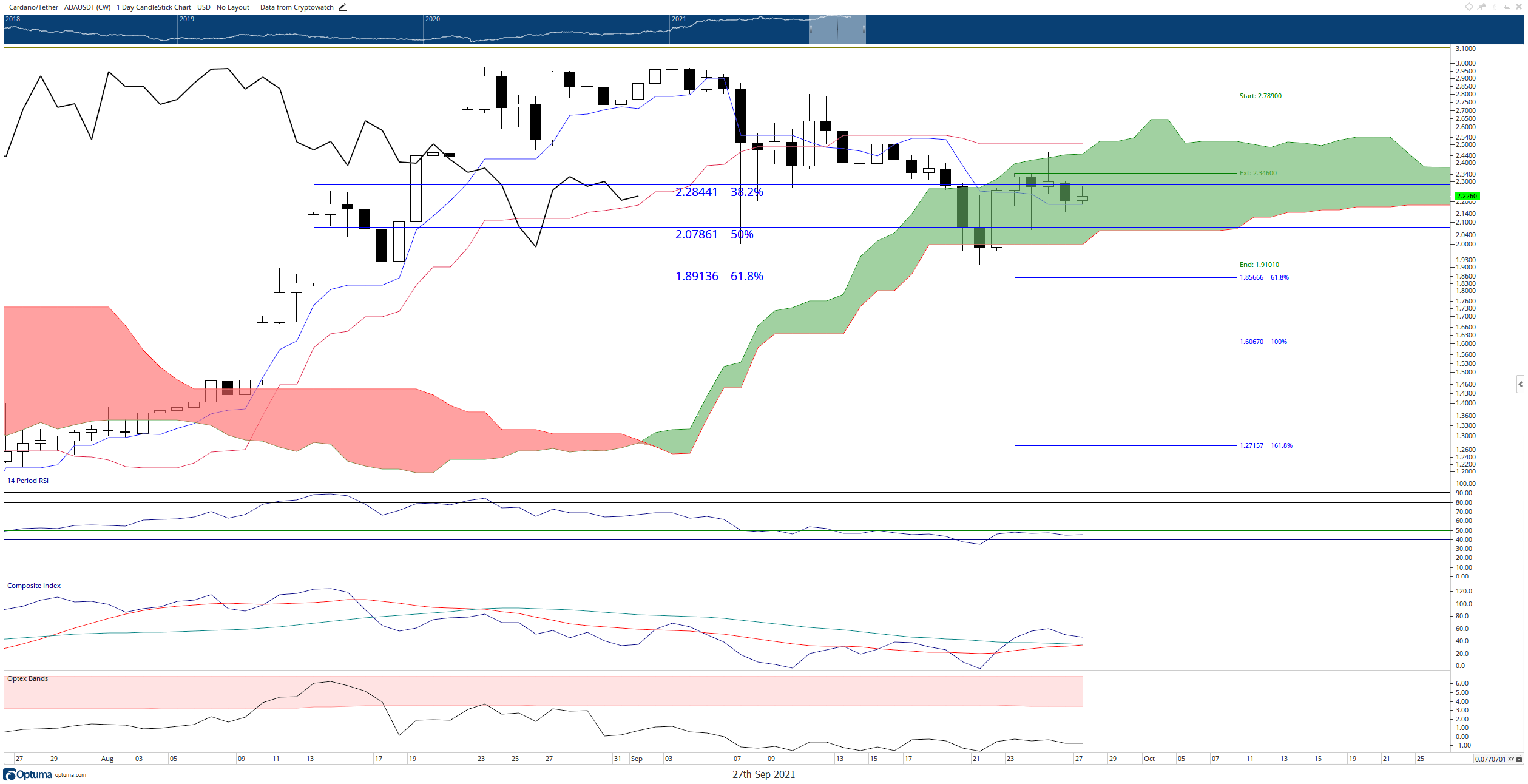 If Cardano price maintains a consolidation zone between $2.00 and $2.40, a bullish breakout near October 11th is likely. However, the threshold the Chikou Span must reach to convert Cardano to another bullish expansion phase falls considerably from $2.97 today to $2.51 on October 11th. If buyers can push Cardano to the $3.00 level, any near-term bearish scenario will be invalidated.

Buyers and sellers should also watch for the consolidation in the Relative Strength Index for a breakout above 50 (bullish) or below 40 (bearish) as a warning of future trend direction.

SafeMoon price hints at another 55% breakout

Shiba Inu price continues to consolidate as it moves sideways following the tremendous bull run earlier this month. SHIB has presented a buying opportunity as it edges closer to a 20% rally following the emergence of a bullish technical pattern.

Charles Hoskinson, Cardano founder, made an effort to dampen Cardano's negativity and uncertainty and the cryptocurrency ecosystem. Hoskinson broadcasted from South Africa and shared potential opportunities for the Cardano Foundation.