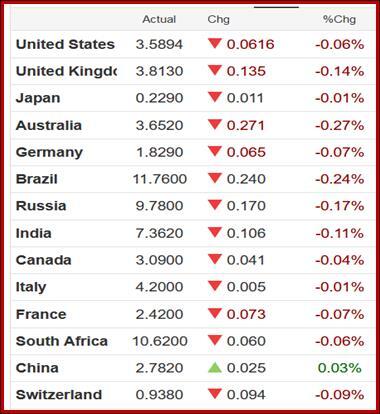 This is largely the result of a single data release, the US ISM PMI showing the US slowdown. Also contributing is the Reserve Bank of Australia paring back from 50 bp expected to 25 bp actual, and maybe even UK Chancellor retreating from the rich-guy tax cut. But to think the Fed and other central banks are going to copy the RBA and/or soften their stance is wishful thinking. We have no evidence–zero, none, bupkis – that the Fed can or will retreat from its aggressive hiking intentions. For that we need to see inflation receding, and don’t forget the lag–a retreat cannot be reliably considered in play for another three months, meaning December.

A bit of softening in the labor market might help the “pivot crowd.” We get Jolts today, with openings expected to have fallen to 11.088 million from 11.239 million in July. Tomorrow it’s the ADP private sector jobs for Sept, forecast at 200,000 and nonfarm payrolls on Friday around 265,000. We also get August factory orders today, probably no change from -1.0% in July. Remember, most of this data is rearview-mirror and in some cases, not terribly reliable in the first place. We continue to whine and complain about payrolls in particular when it comes to accuracy.

Beware talk of the end of the tightening cycle, aka the pivot. It’s not really in sight – that’s an apparition. Yes, it’s out there, but too far away to see. That means a disruptive turnaround at some point soon with yields and the dollar rising again.

Tidbit: From Bloomberg: Russia’s ability to persist in the war is threatened by a loss of revenue from oil and gas. “With a European Union ban on Russian seaborne crude imports on the horizon, the market is already drying up, and Asia isn’t stepping into the breach with the enthusiasm of the early months, Julian Lee writes. Flows to the big three buyers of Russian barrels – China, India and Turkey – peaked in June at 2.2 million barrels a day. In the four weeks to Sept. 30, that figure was down by about 350,000 barrels a day.” Russia believes it owns Europe via dependence on its gas. It’s wiling to let its own citizens suffer to prove the point. But what if Europe can get by without Russian energy?

Tidbit: Authers, late of the FT and now at Bloomberg, is always to be heeded because he hits the nail of the head so often. About the Credit Suisse situation, he points out that “Deutsche Bank and Credit Suisse are both now trading at less than 25% of their book value, but Credit Suisse has set a new low (unlike Deutsche), and for the first time since before 2008 now has lower book multiple.

But “if we look at the VIX and VStoxx indexes that measure fear in the US and European markets respectively by assessing bets on future equity prices in the options markets, we find that the anxiety doesn’t look so great.”

“What to make of this? … The fact that credit and equity markets have turned against a big bank to this extent is very significant, and shows that concern about a possible major accident is real and rising. In my opinion, the scenario of a bankruptcy would be so damaging that it could not be allowed to happen; a bailout that marks another huge reverse for tighter money, however, is conceivable.

“… Social media speculation is one of the curses of our age…. Twitter is full of blood-curdling illustrations of how bad it would be if Credit Suisse were to fail. These are correct; it would be terrible. But the Twitter posts have little or no evidence that it’s going to happen. If Credit Suisse doesn’t need a bailout, as the CEO’s memo endeavors to show, then all the talk has left it very much oversold and its stock looks a buy. The courage it would require to buy into it at this moment, however, shows why there is so much money to be made from buying at the bottom; it’s a difficult thing to do.”

Tidbit: One of the first cases of data mining was Yale Hirsch’s analysis of stock index performance as related to the calendar and political events, chiefly holidays and the presidential election, to derive cycles. This is where “sell in May and go away” comes from. The Trader’s Almanac is still published and here is a nugget from that published by The Daily Chart.com:

“Seasonal and cyclical trends have been working against investors all year. We're coming off the weakest month, within the weakest year of the 4-year Presidential Cycle. The good news is that we're currently in the 'Sweet Spot' where a lot of these cyclical headwinds turn into tailwinds. The blue line is a composite of three cycles; the 1-year seasonal pattern, the 4-year Presidential Election Cycle, and the Decennial Cycle. In other words, it combines all years since 1946, all midterm years, and all second years of decades. As you can see, this composite has caught several major turning points in 2022 including the June lows and the August highs. If the S&P 500 continues to track this composite, we could see a strong fourth quarter.”

Needless to say, this runs counter to the majority view of gloom and doom until mid-Jan. We suspect it may be correct because we just lightened some positions, but grain of salt. 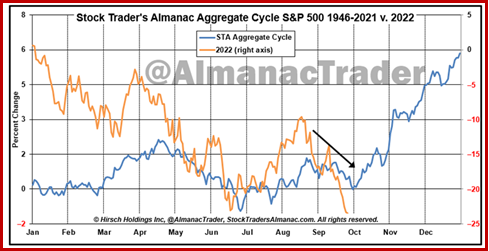