Most investors have been looking at how Gold is acting like Pyrite (Fool’s Gold) and the current political climate in the U.S. others have been keeping a key eye on oil and specifically West Texas Intermediate (WTI) as it recently just hit an 11-month high, not seeing these levels since February 2020.

You see the commodity has reached $53.90 per barrel, which is the highest level since February 2020. Among the primary drivers for this rise are the reflationary hopes in the market, Saudi’s production cut, and the falling stockpiles in the U.S. Then there’s the U.S. Dollar Index (DXY), which has recently come off from a three-week high and was underpinning commodity prices.

As expressed, there are three primary drivers that have helped WTI reach these heights, well, they can be considered four if you want to count the current USD weakness. The biggest boost to the price of WTI has to come from the larger than expected stockpile draw. The American Petroleum Institute (API) crude oil inventories had an expected drop of 1.66-million-barrels in the inventories for the week ending January 8th, however, the drop was much larger at 5.82-million-barrels. When this is combined with the drop in the USD, the price of WTI was surely to surge the way it has.

Furthermore, prices of WTI seem to be enjoying the tailwind caused by Saudi Arabia. The largest crude oil exporter has unilaterally announced that it will be cutting production by 1 million barrels per day (bpd) in February and March as many OPEC+ members have dissented and not agreed to cut production any further. Since then, prices of oil have risen by more than 13% in hopes that Saudi Arabia’s willingness to cut production could effectively rein in the oversupply in the market which will help shelter the fragile price from the ongoing COVID-19 pandemic.

Of course, the black liquid is not immune to the political climate. The recent win of Democrats in the Georgia run-off elections which secured them both houses of Congress, added to the positivism in the price of WTI. With Democrats in control, the likelihood of another stimulus has risen exponentially as it would aim to revitalize demand and output in the long term. On Thursday, President-elect Joe Biden is expected to showcase a new stimulus plan, which will hold the eye of almost every commodity and currency trader alike for signs of future inflation outlooks.

Currently, investors will be looking forward to the Energy Information Administration (EIA) Crude Oil Inventory in the U.S. which usually gives a much better picture of the current oil market in the U.S. Oil traders are expecting a 3.0-million-barrel decline in inventories for week ending January 8th. This data is expected to come out later in the day.

Just last week, crude inventories fell by 8.01- million - barrels, far exceeding the markets’ expectation. Historically, oil prices and inventories have a negative correlation as an increase in inventory would mean an increase in supply and hence lower oil price and vice versa.

However, not all glitter is gold, as the downward pressure still remains on the instrument with lockdowns back on the menu due to the new strain of COVID-19 which is far more transmissible than the original type. Lockdown and travel restrictions will continue to weigh prices down as demand for oil dwindles.

Looking at the technical side of WTI, we can notice that the instrument was able to breach the key resistance level at $50.00. With that level out of the way, the road has been made clear for more upside movement, which Bulls took full advantage of and pushed the instrument higher towards $54.60 - which is the previous high we mentioned.

In the short term, momentum is biased towards the upside, as suggested by the formation of the MACD bullish crossover. Furthermore, looking at the Bollinger Bands, we can notice the increase in volatility as the bands widen. However, what’s curious about this widening, is the way it happened, gradually meaning that there could still be some more room for an upside move. 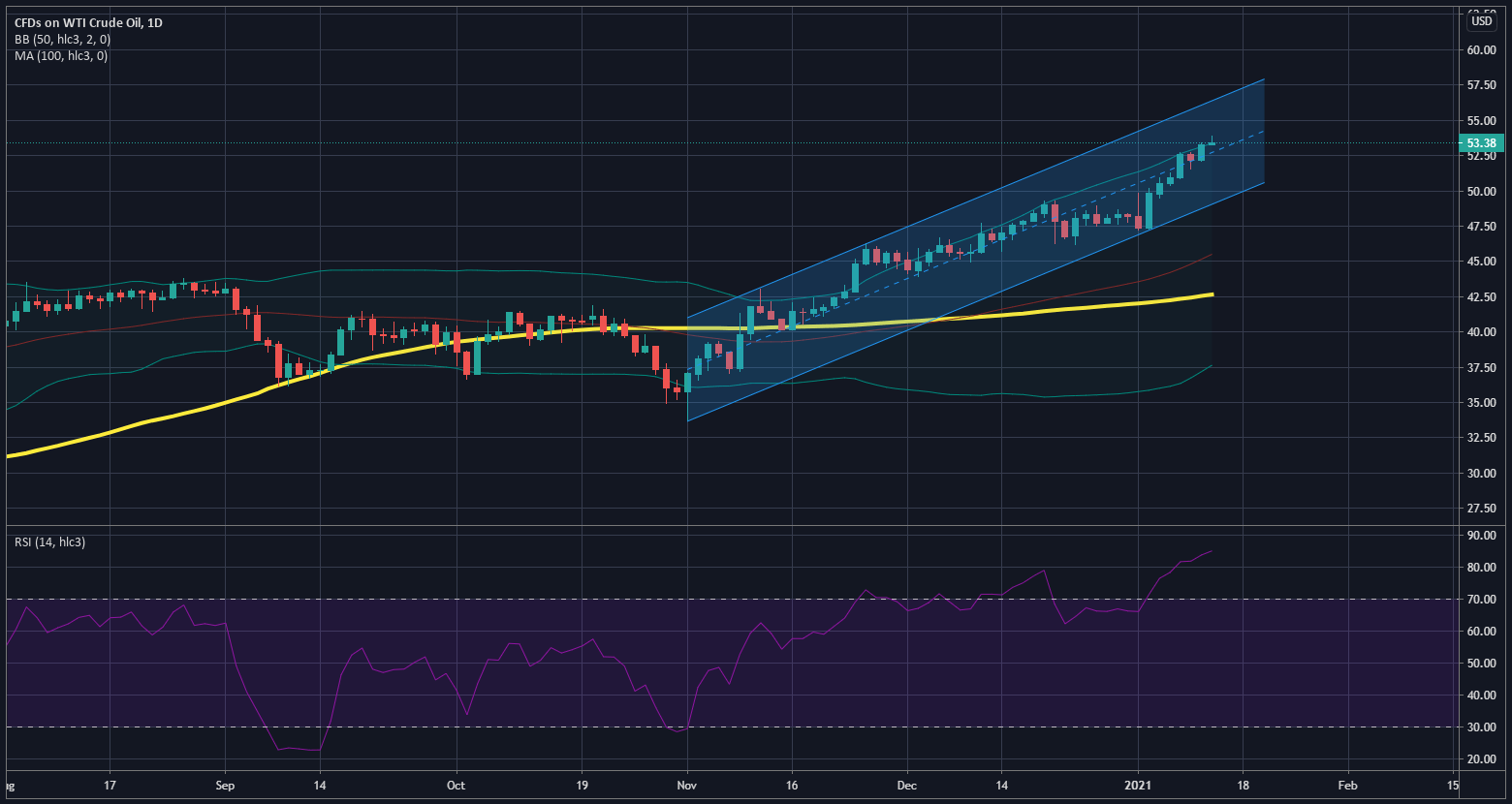 However, with all the positive news around the instrument, both technically and fundamentally, the instrument seems to have been led to the overbought zone as indicated by the Relative Strength Index (RSI). The indicator is currently printing at the 85 level which means that there is a great deal of overbought-ness in the market. From the current price structure, I can say that there will be a correction at least towards $47.50 which is currently acting as the major support, breaking below that level could undermine the current bullish pressure.