The recent rally in the bond yields pushed gold prices down, but this trend won’t continue forever, as the Fed will likely be forced to step in.

In March, we saw a continuation of the rally in bond yields that started in February. As the chart below shows, the 10-year real interest rates have soared from -1.06 on February 10 to -0.66 percent on March 23. 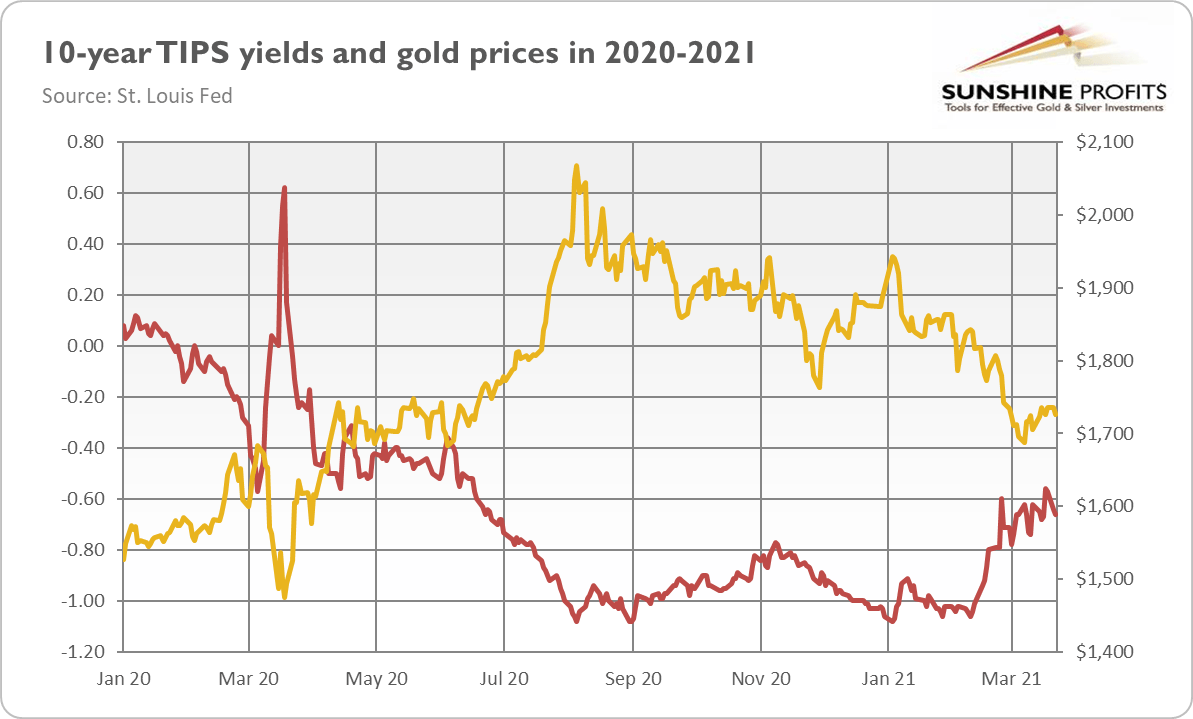 What is clear from the chart is the strong correlation between the 10-year TIPS yields and the gold prices. As a consequence, the rising bond yields made gold struggle. However, in March, the real interest rates were much more choppy compared to February, when they surged decisively. It may signal a lack of fuel for the further rally, at least for a while.

Now, what is important here is that despite the recent jump in the real yields, they remain extremely low from the historical point of view . And they remain well below zero! This is good news for the gold market, as the yellow metal shines the most when real interest rates are negative.

Of course, the direction of change is also very important, not just the absolute level. So, the question is, will the rates increase further? Well, it’s unfortunately possible, as the improving economic outlook and risk appetite are encouraging investors to buy stocks rather than bonds.

On the other hand, the rising inflation expectations suggest that real yields may struggle to increase further , or they actually may go down. As the chart below shows, the market expectations of inflation in the next 10 years, derived from the Treasuries, have risen from 0.50 at the bottom in March 2020 to 2.31 on March 24, 2021. 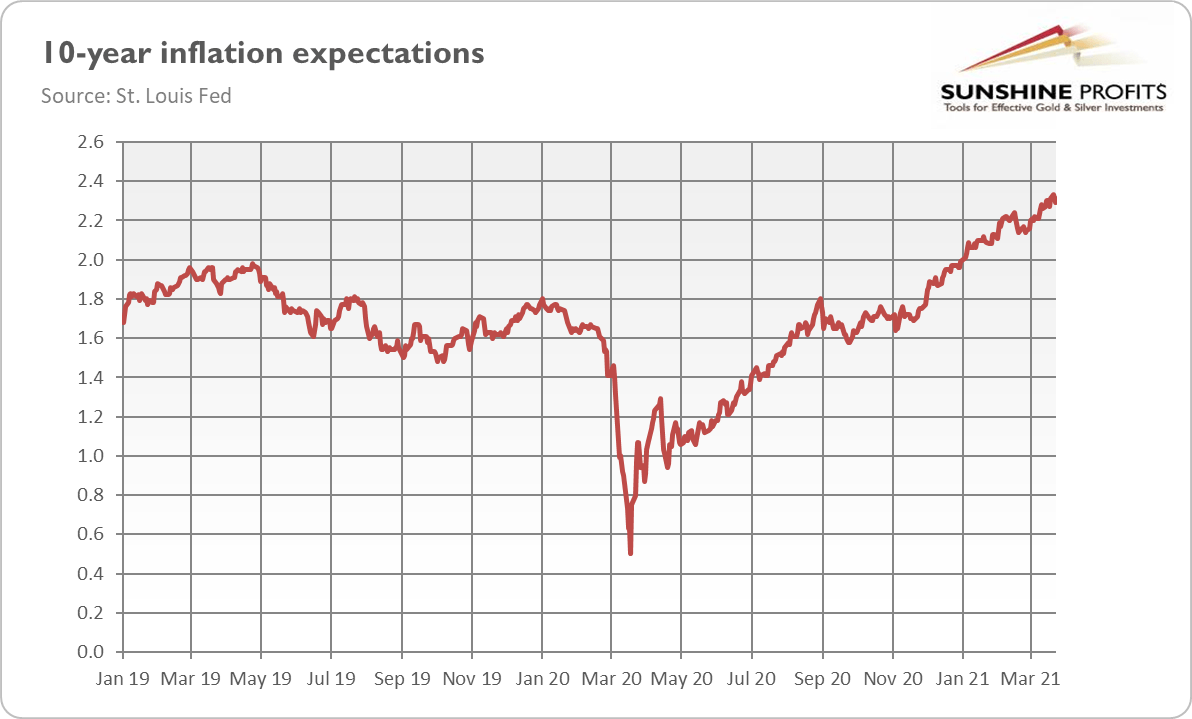 Given the increase that has already taken place, the further rise may be limited. But the broad money supply is still rising at an accelerating pace, and investors still don’t believe that the Fed will not hike the federal funds rate to combat rising inflation. They don’t buy the new monetary framework and all the talking about letting inflation overshoot the Fed’s target. Of course, the promise to be irresponsible in the future is not very credible, but investors shouldn’t underestimate the recklessness of central bankers .

You see, we live in an era of weak policymakers unable to make serious commitments, or take unpopular actions, contrary to the needs of Wall Street and the government. For example, Janet Yellen , as a Treasury Secretary, should stress fiscal discipline – instead, she praised the “go big” approach of the new administration. Congress has already passed the $1.9 trillion fiscal stimulus and the next additional spending is coming . The legislative proposal of new government expenditures on infrastructure and other priorities (such as climate change and the labor market) could collectively cost more than $3 trillion.

It’s true that the additional government spending and the necessary borrowing could push up the yields (this is an important downward risk for gold). But rising interest rates could hamper the economic recovery and make government financing more costly, further ballooning already mammoth fiscal deficits . So, the Fed will likely have to step in and expand its quantitative easing program or introduce other measures, such as the yield curve control, to curb the long-term interest rates. It will weaken the dollar, thus supporting gold prices.

As a reminder, the Bank of Japan has started to target the yield on 10-year government bonds at around zero percent in 2016, as it decided that the rapid monetary base expansion via large-scale asset purchases was unsustainable. More recently, the European Central Bank has announced in March the acceleration in the pace of its QE in a response to the rally in bond yields.

So, do you really think that the Fed won’t follow suit? That Powell will not help Yellen, his former boss from the Fed? The sharp increase in yields would be inconsistent with the Fed’s dovish policy and the overall debt-driven economic growth. Hence, if the interest rates increase too much, be sure that the Fed will do something, providing a long-awaited support for the price of gold.

What is “too much”? Not so much, at least not in the debt-trap we live in. Some analysts believe that this could occur if nominal 10-year Treasury yields rise over 2 percent, not too far from the current levels, as one can see in the chart below. 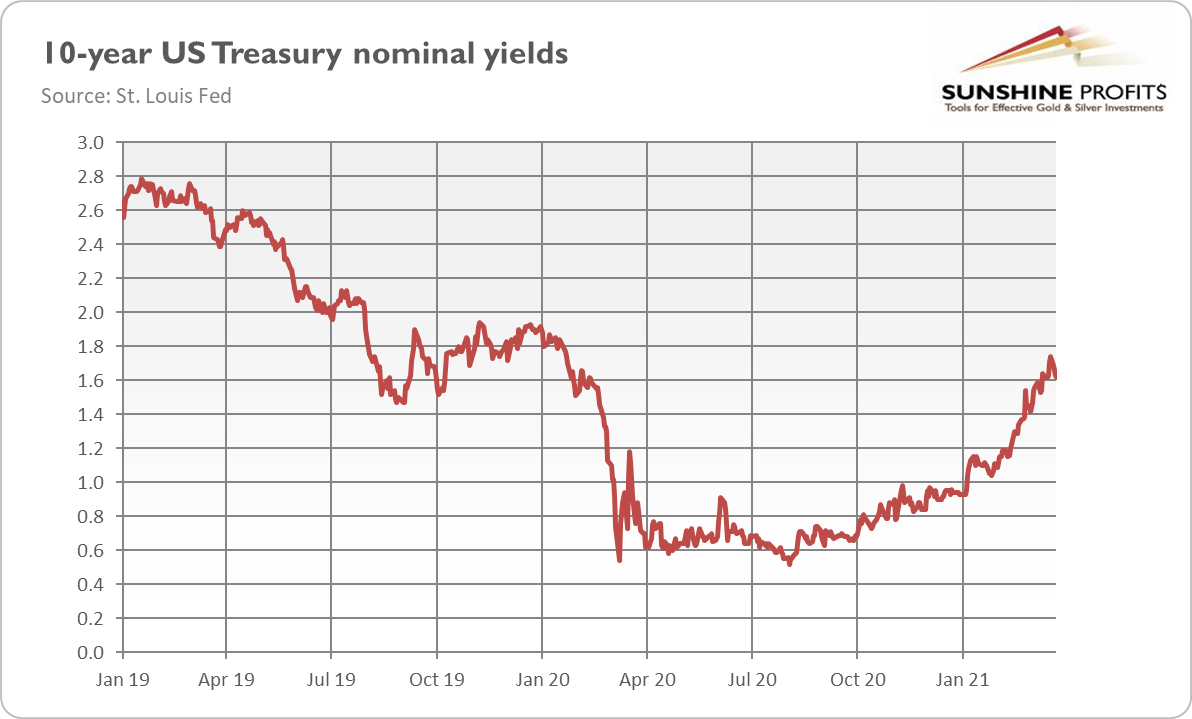 Should we be surprised, given the bond bubble created by the central banks? They have kept the bond yields artificially depressed for years, so even a modest normalization – perfectly justified by the expectations of economic recovery and rising inflation – could collapse the house of cards and cause a financial crisis . Hence, although markets have become more optimistic recently, I’m afraid that bears and black swans haven’t said the last word yet. And neither has gold.