Next week earnings season really gets into gear with some massive releases that will shape the direction of the main US indices for the quarter ahead. So far bank earnings have been more miss than hit. JPMorgan (JPM) and Citi (C) both slid, while Goldman (GS) took the unwanted prize of probably the worst of the investment banks. Commercial banks fared a bit better but not as much as the street was hoping. Strike one to the bears. Netflix (NFLX) then ushered in the tech space and hopefully that is not a sign of things to come, if it is, goodnight see you next quarter. Friday is rounding out another horrific week for the tech space so expectations are lowered. This should see a big snap-back reaction if earnings can hold up. The bank space suffered from a similar but reverse problem. Financial stocks had run into numbers and the disappointment was therefore harder felt.

It is not just stocks that are crumbling, bitcoin too is having a rough ride. Russia called it out this week as a pyramid scheme and the crypto leader cracked and is at $38,200. Bear in mind that some of the biggest Bitcoin moves have happened over the weekend so keep an eye on how this develops. The dollar lost a bit of ground on the back of some position squaring and perhaps some more central bank posturing. While the Fed is nailed on to raise rates in March, the ECB's hand may be forced as inflation remains more than transitory and we note the ECB actually dropping that term from its last press release. Coincidence, we think not and neither did the German bund as it went into positive yield territory for the first time in three years this week.

As I look across the screens with little of the weeks trading left it is a sobering experience. Again big tech and growth names are suffering and it is left to the dead cats to bounce. Peloton (PTON) is up 13%, lucky for some but not investors after the stocks cratering yesterday. If Peloton is our only hope then we are in big trouble. No, we need a big slate from big tech next week. Otherwise, we will be looking at some more key levels which we outline below.

We did make the call on Wednesday when the S&P 500 broke through the 100-day moving average that the 200-day was not too far away and well here we are already at $442. Watch the close carefully as this is a big big level. Below $442 and $428 is the next support and given all the panic, we will bring to your attention that this just retraces back to where we were in September. Perhaps the last quarter was just too much of a stretch and this may have been the shake-out we needed. $428 is probably the last major support before a volume gap will likely see a sharp move to $415. The MACD is highly stretched but the RSI has more room to go so the bottom may not be in yet. 200 day though is big, close above and things could improve next week. 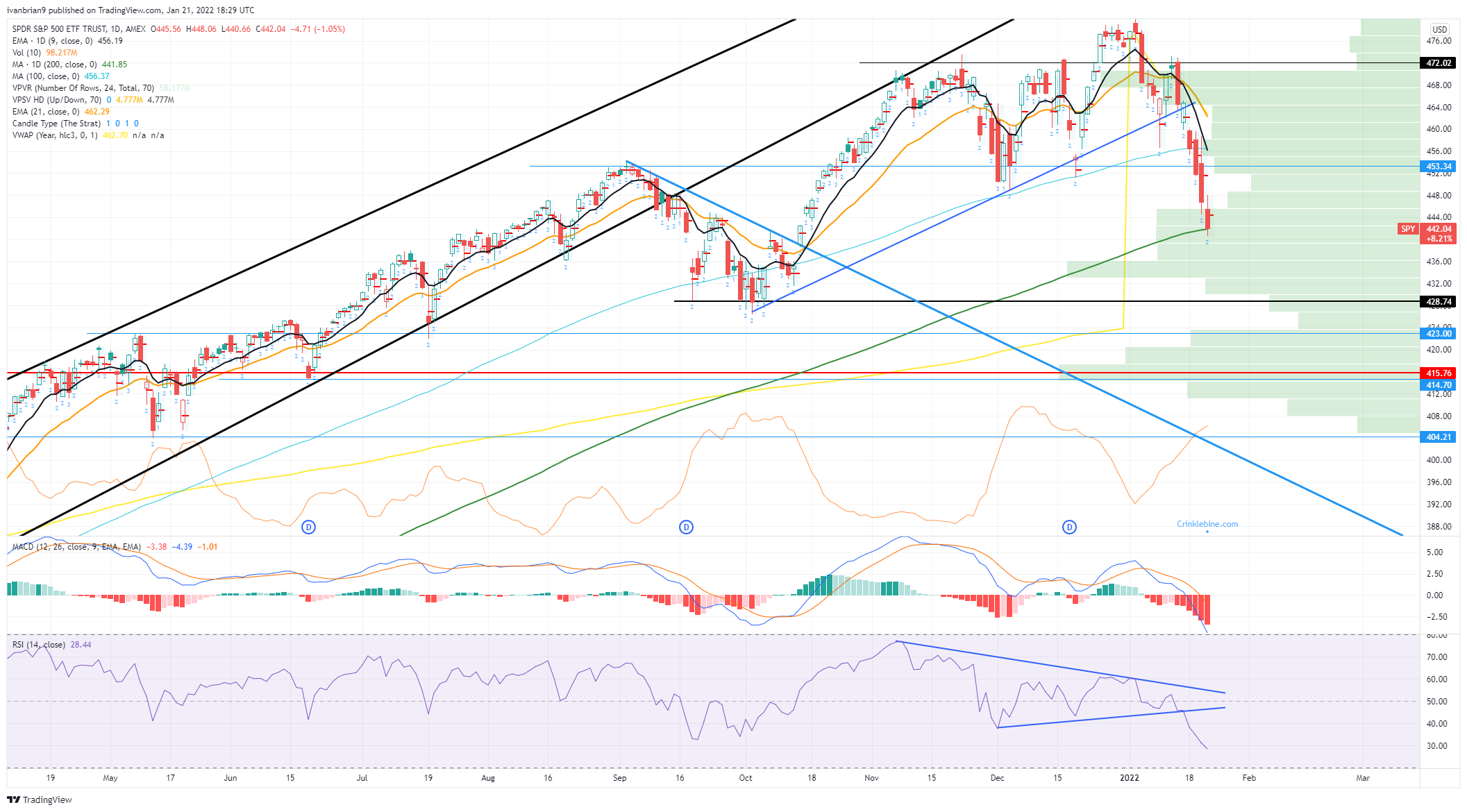 Normally we would be taking you through the levels in the Nasdaq about now but it is basically just a worse picture than the SPY above. Instead, we present the Russell 2000 (IWM). This looks interesting. The rally in Q4 last year, which now has been more or less wiped out, did not get reflected here. We commented on this several times last year, ie that the market breadth was poor and only mega tech names were leading the way. Well, the Russell failed to match the Q4 ascent of the Nasdaq and S&P and now it has put in a highly significant move. Breaking out of the long term consolidation area, cracking the 200-day moving average, and heading straight for the 100-day moving average at $190. There is a huge volume gap until $153. 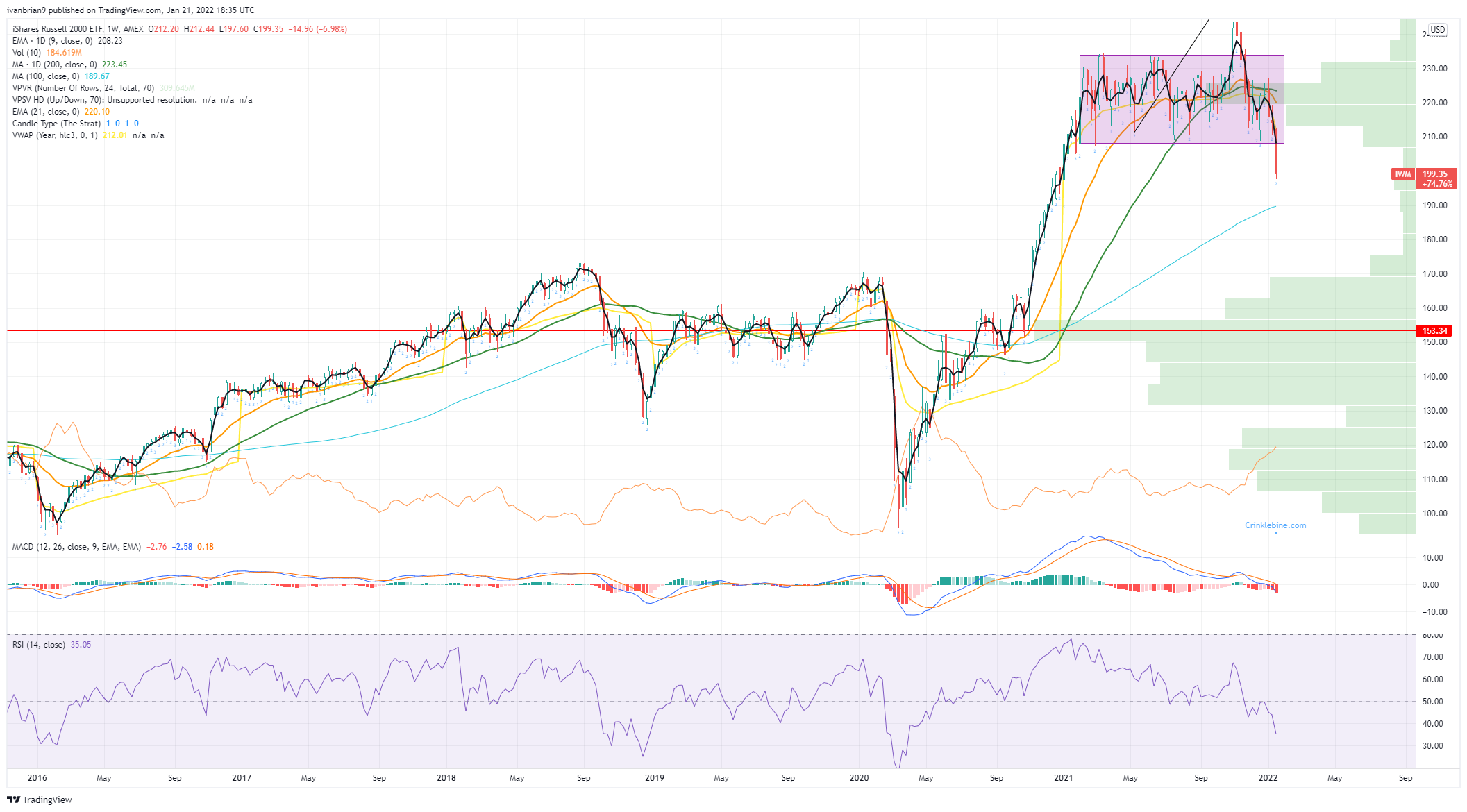 Ok, so we couldn't resist. Big support coming at $350. The 200-day is already gone so tech earnings next week is the big chance for a bounce. 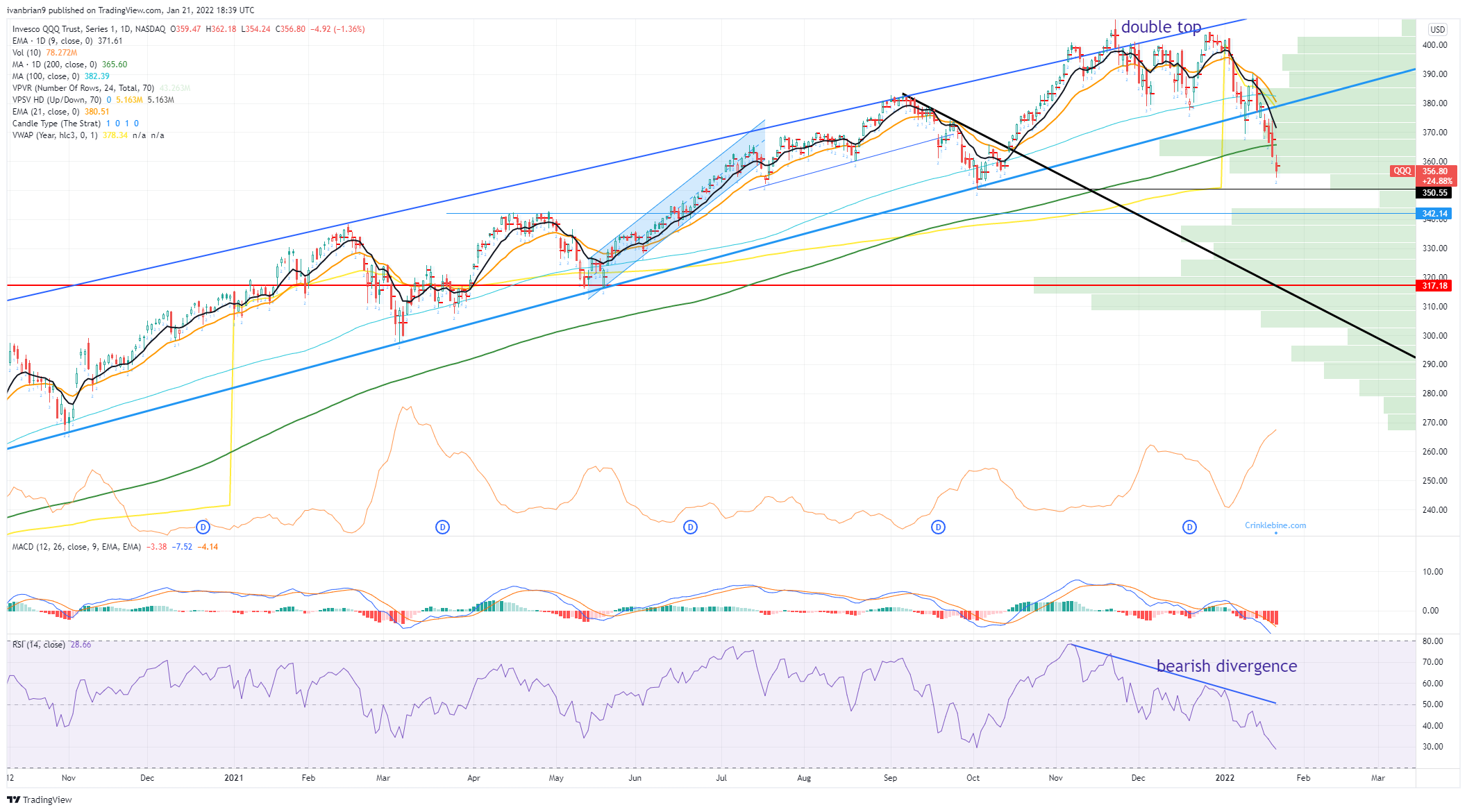 Last week we noted how the 3X leveraged Nasdaq ETF, the TQQQ, had seen the biggest inflows. As ever leverage is only to be used by the highly experienced and so this week that fund is down nearly 20%, ouch!

This time around net flows were to the tune of -$4 billion from the equity ETF space. The first outflow in over 4 weeks. According to Refinitiv/Lipper Alpha, the SPY lost $6.7 billion while a dividend ETF (SCHD) was the biggest inflow.

While we have observed some poor earnings so far, and hope for better next week, it is worth pointing out that so far 64 companies from the S&P 500 have reported. Of these 76.6% have beaten estimates, according to Refinitiv. This is still well above long-term averages. We should also note, again thanks to Refinitiv/Lipper Alpha, that the financial sector has the worst earnings growth rate, so we have gotten that one out of the way. Next week 104 companies from the S&P 500 are going to report. Notables as mentioned Apple (AAPL), Tesla (TSLA), Microsoft (MSFT), Boeing (BA), and IBM. 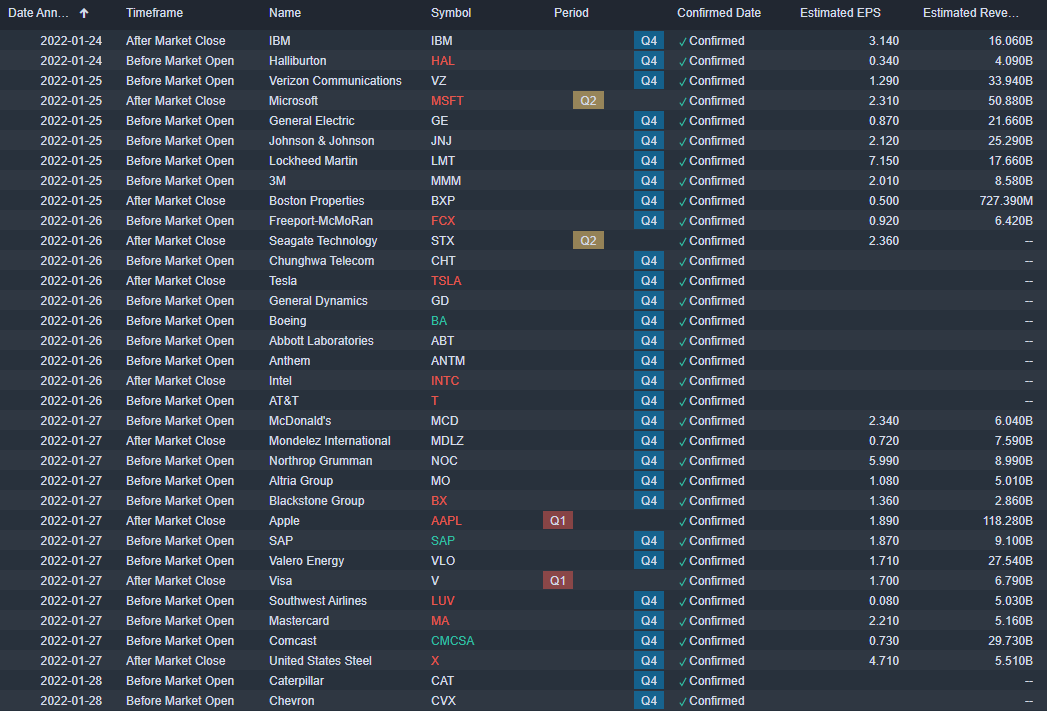 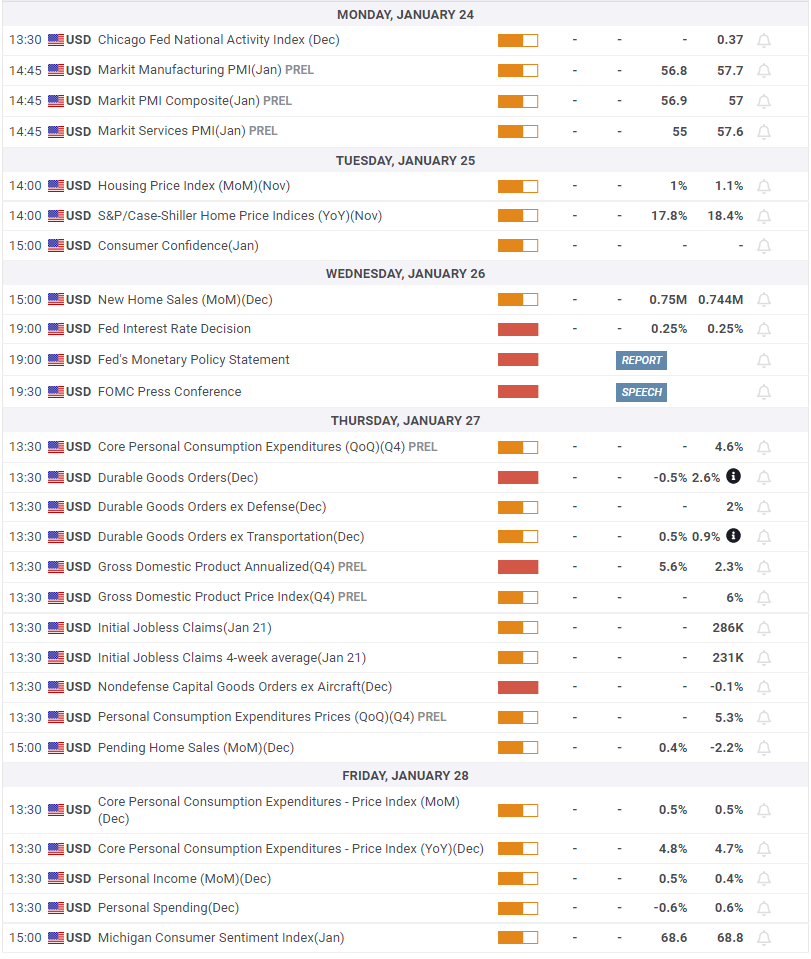