Monday represents the last chance to turn equities around for the year if our analysis is correct. The January barometer as it is known has an 80% success rate in predicting the outcome for the rest of the year. If January is negative then we can say with 80% certainty that the year will be a negative one for the S&P 500. Sobering enough so we just need a 9% rally then on Monday! The January effect is not quite as high for the Nasdaq but it is still nearly 70% so it is powerful. Apple (AAPL) did its best to turn the entire tide of negativity as it posted superb results after the close on Thursday. The stock is up 6% from Thursday's close with a little over 2 hours of the session left on Friday.

So far though the headlines for earnings season have been mixed. The bank sector as ever kicked things off and this left investors feeling a little flat with Goldman Sachs (GS) disappointing. Tech was hoped to be the savior and Apple obliged so we look for more of the same next week from Facebook Meta (FB), Alphabet Google (GOOGL) and Amazon (AMZN). Added to next week's slate will be more big oil from Exxon (XOM). The energy sector has not had a good start from Chevron (CVX). Earnings came out this morning and investors had pushed the stock on in anticipation of strong earnings as oil and gas prices remain elevated. Chevron (CVX) failed to live up to those expectations and the stock is down 4% at the time of writing.

Turning to the macro side of things, the Fed maintained its more hawkish tone this week. As expected no change to interest rates but Powell did open the door for 50 bps point rises being a possibility this year. Analysts rushed to up their forecasts for the year ahead as did fed funds futures. An extra hike, making 5 now in total, has been priced in for 2022 by fed funds futures and most investment bank analysts tend to agree. We are less sure. The Fed will certainly go hard and go early but may blink later in the year if markets remain mired and the US economy slows. That would do its own job on inflation. The yield curve certainly eyed a downturn in economic growth as it flattened significantly post the Fed conference. The dollar went on a hawkish charge after, hitting 1.1120 versus the euro. Friday's inflation data, the Fed favourite PCE, came in more or less in line which did allow a Friday rally for equities. This was a combination of Apple dragging everything along and some position squaring after a volatile but largely flat week if you can believe it

We commented on margin trading before and noted with interest some commentary around its stubborn elevation from TME last week. We had identified the triple leveraged TQQQ as being symbolic and so it proved. This week investors were net sellers of equity funds to the tune of $4 billion. In the ETF space, the biggest losers were the Nasdaq (QQQ) and S&P 500 (SPY) losing nearly $8 billion between them.

Earnings season has a decidedly negative feel to it so far with some notable misses from the likes of McDonald's, Netflix, and Tesla. Well, not all misses but negative reactions. Outlook has been the more focused on metric and so it should be as markets are forward-looking while earnings represent the past. Still, we are surprised to note from Refinitive Lipper Alpha that so far 168 companies of the S&P 500 have reported and 77% of them have beaten estimates. Certainly, the market performance does not reflect this historically high earnings beat percentage. Next week we have a further 108 companies from the S&P 500 reporting and some huge tech names are in the mix as mentioned above. This really is a make or break for the market, if not for the year, then certainly for the first quarter.

It has felt a lot worse this week with some wild swings but in fact, the S&P is little changed as I write with just two hours of the session left. It is down less than 0.4% on last week. This again makes us identify the potential for a bullish double bottom that we mentioned in last week's outlook. $428 remains huge support for the SPY. By traditional metrics, the RSI is also oversold at 30, but we prefer 20. The longer the SPY remains below the 200-day moving average then the more acceptance of a long-term downtrend so this is the key resistance if $428 holds. The 200-day MA is currently at $442. The MACD is also at 6 month lows. 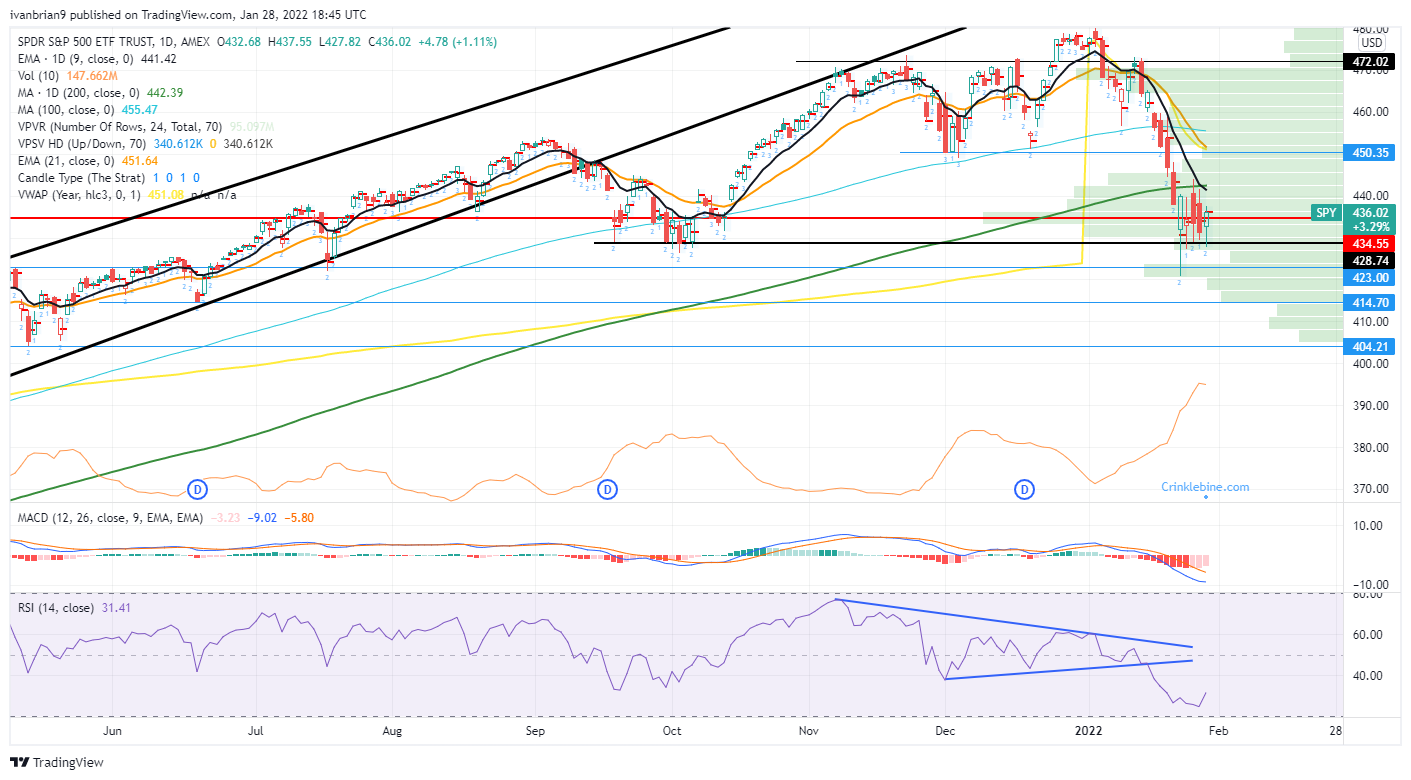 Much the same here but the chart is more bearish having broken the key support at $350. This would be in keeping with the overall rotation theme. But again we note the RSI at 30 and a very low and stretched MACD. While this one has entered a bear correction trend, these stretched metrics could see a small recovery next week. 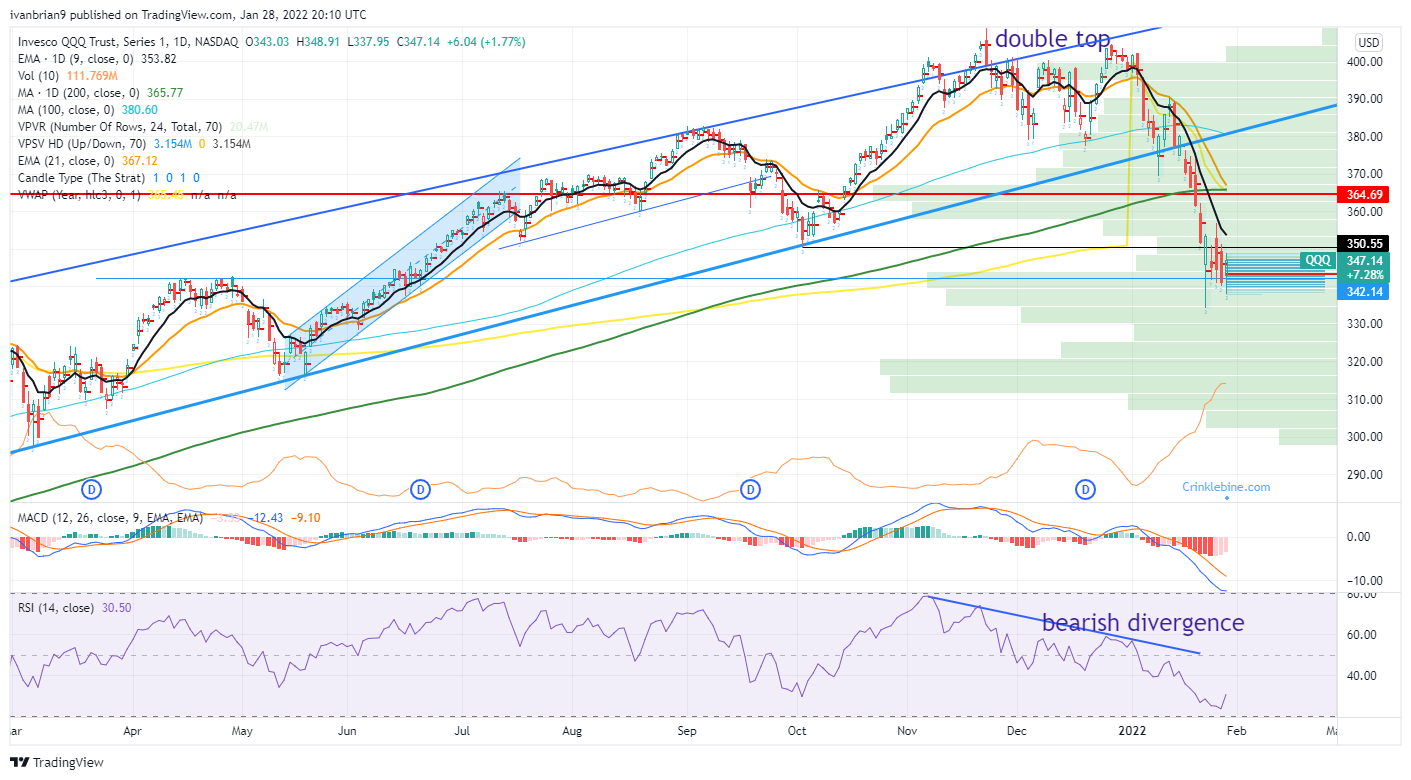 The week revolves mostly about big tech earnings but on the macro side, the week builds nicely to Friday's employment report. Recent jobless claims have been a bit shaky so a strong report is needed to calm investor fears of stagflation. Earlier in the week, we get the PMI's. Most traders do not focus too much on the PMI data but it does have a very strong correlation on stock market performance albeit over a longer time frame. 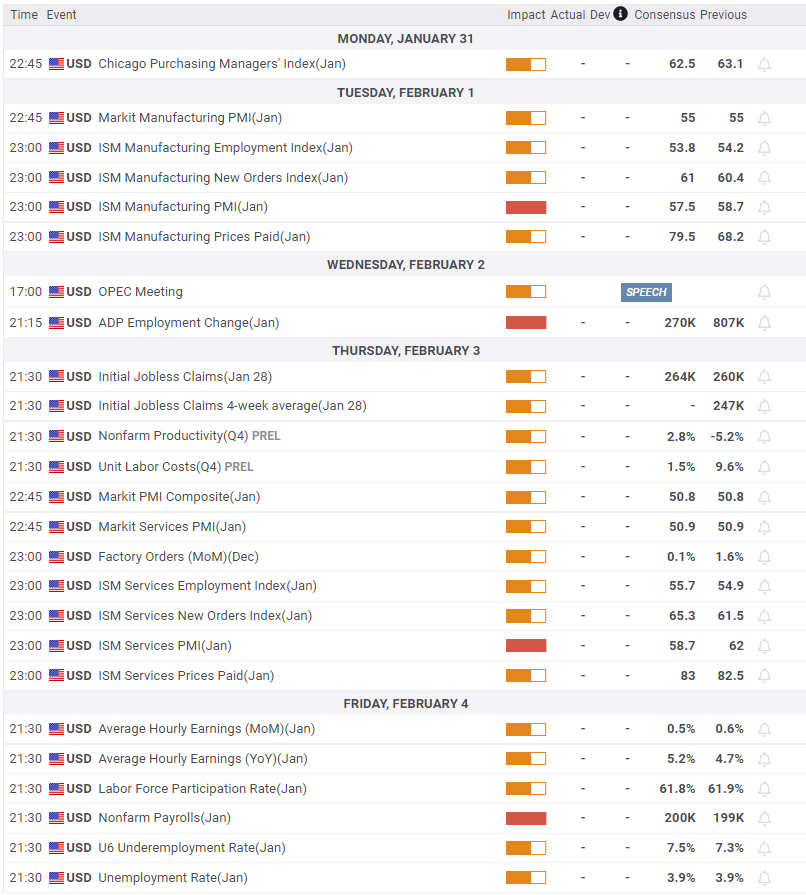