The European Central Bank is expected to steal the limelight from the Federal Reserve next week as it meets to discuss fresh stimulus measures for the Eurozone’s troubled economy. But the Fed will still be on investors’ minds as the preliminary report on US GDP growth in the second quarter could determine whether it opts for an aggressive rate cut later this month. Meanwhile, the pound’s rollercoaster ride is expected to extend into next week as the result of the Conservative party leadership contest is announced.

As markets anxiously await a possible surprise cut in interest rates by the European Central Bank on Thursday, the flash Eurozone PMIs for July will be grabbing the headlines on Wednesday amid mixed signals about the euro area economy. The Eurozone’s composite PMI – seen as a strong indicator of GDP growth – has been inching higher in recent months on the back of an improving services sector. However, the manufacturing PMI has been stuck in negative territory, weighed by increased trade and Brexit uncertainty. There are concerns that the manufacturing weakness could soon spill over into the broader economy, so further marginal increases in the composite PMI are unlikely to be reassuring to policymakers. In July, the composite PMI is forecast to slip 0.2 percentage points to 52.0. 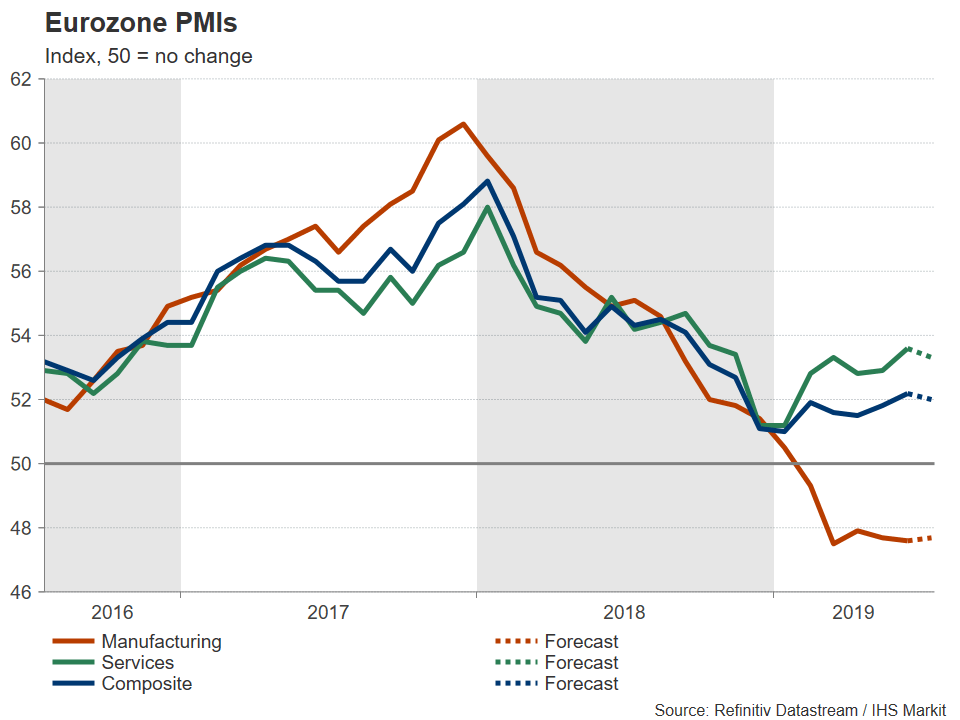 Traders will also be watching business survey data from the bloc’s largest economy. Germany’s Ifo business climate index will be monitored on Thursday before attention turns to the ECB meeting.

The ECB is expected to keep monetary policy unchanged on Thursday but is widely anticipated to update its forward guidance to signal some form of easing at its next meeting in September. Futures markets are telling there’s more than even odds that the ECB will trim rates by 10 basis points next week, while a reduction in September is fully priced in. Many analysts think the ECB will also restart its QE programme to fight persistently low inflation and a deteriorating economic outlook.

Should a rate cut come as early as next week, the euro is likely to skid lower and breach its recent support in the $1.1180-90 region.

Economic data will be scarce in Asia with only the manufacturing PMIs having the potential to be market moving. Preliminary manufacturing PMI prints for July are due from Australia and Japan on Wednesday. The Australian dollar is likely to remain on the front foot versus the US dollar if the PMI holds comfortably above the 50-neutral level. In Japan, another PMI reading below 50 would support bets of Bank of Japan easing in the near future. However, the bears will find it difficult to pull the yen lower if the US earnings season continues to heighten concerns about the growing negative impact of the Sino-US trade war on corporate profits, keeping risk aversion elevated.

The UK will also have a quiet week on the data front but in the political sphere, things will be far from subdued. The CBI’s survey on retail sales (Tuesday) and factory orders (Thursday) will be the only important releases and all eyes will instead be on the outcome of the Conservative leadership election. The results of the party vote are due to be announced on Tuesday and Boris Johnson is the strong favourite to replace Theresa May as prime minister. Johnson’s opponent – Jeremy Hunt – is not seen to have gained enough ground to close the gap, but with not a lot differentiating their position on Brexit, a surprise win for Hunt is unlikely to provide a significant boost to the pound.

Given that many traders think the leadership race is already a foregone conclusion, market reaction may be limited, and the attention will be on who will make up the new Cabinet and what will Johnson’s first move to the EU be as PM. Some hints of compromise on the part of the European Union this week as well as a fresh attempt by British MPs to prevent Parliament from being suspended in the lead up to the Brexit deadline helped sterling rebound from two-year lows against the dollar. Further short-term gains are possible if Johnson adopts a conciliatory tone as well.

US GDP in focus ahead of Fed decision

The advance GDP report for the second quarter will be the focal point for the dollar, which could prove critical for the US currency as investors are split on the likelihood of a 50-bps rate cut by the Fed at the next meeting. Ahead of the GDP figure, though, the housing market will fall under the spotlight amid signs of renewed weakness in the sector. Starting the week on Tuesday are the monthly home price index (May) and existing home sales (June), followed by new home sales (June) on Wednesday. Data released in the past week showed housing starts declined in June, while building permits fell to a two-year low. More poor numbers on housing would strengthen the argument for bold policy action in July.

Also due on Wednesday are the flash July PMIs by IHS Markit and durable goods orders. Durable goods orders are forecast to have increased by 0.5% month-on-month in June, recovering partially from the 1.3% drop of the prior month. 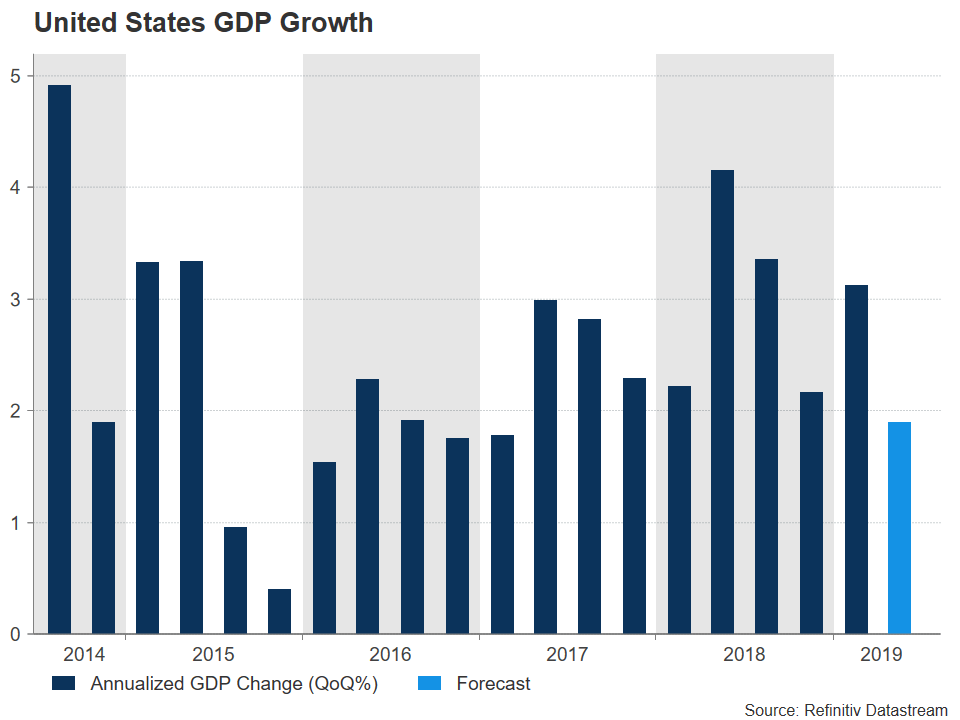 On Friday, the latest GDP estimate will be eyed as analysts and policymakers debate the need for a hefty 0.50% cut in interest rates when the Fed meets at the end of this month. The odds for such a move have risen to around 45% and have been see-sawing with the conflicting incoming data. The GDP report is not expected to be an exception and there could be more volatility for the dollar if there’s big surprises in the numbers. The US economy is projected to have expanded by an annualized rate of 1.9% in the three months to June, a marked slowdown from the first quarter’s 3.1% rate.

But following the stronger-than-expected retail sales figures earlier this week, a beat in Q2 growth forecasts is possible. If combined with an overly dovish ECB, the dollar could reverse some of this week’s declines.