The EURUSD slumped sharply as investors reflected on the latest interest rate decision by the Federal Reserve and the potential divergence with the ECB. On Wednesday, the Fed decided to leave interest rates unchanged between 0% and 0.25%. The bank also hinted that it will end its quantitative easing policy in March this year. In a statement, Jerome Powell failed to rule out that the bank could accelerate its tightening process in its battle against inflation. Therefore, analysts expect that the Fed could implement as many as four rate hikes. On the other hand, analysts expect that the ECB will have only one rate hike this year.

American equities were little changed in the futures market as concerns about the Fed remained. Since stocks did well in a period of easy money, analysts expect that stocks will underperform when the bank starts tightening. Fortunately, American companies have done well during the earnings season. Earlier this week, IBM announced robust results, boosted by its cloud computing division. The same was true with Microsoft, which published string results on Tuesday. Yesterday, Tesla published record results and profitability even as it warned about the impact of the chip shortage. Later today, Apple is also expected to publish strong results.

Commodity prices were mixed today. Precious metals like silver and gold declined sharply because of the hawkish Federal Reserve. Gold has dropped by more than 1% in the past 24 hours while silver has dropped by over 2.8%. On the other hand, crude oil and natural gas prices held steady as investors focused on the rising tensions between the US and Russia. Russia is one of the biggest producers of oil and gas. Therefore, any sanctions against the country will push Putin to retaliate by blocking gas exports to Europe. Elsewhere, industrial metals like copper, platinum, and palladium declined because of the stronger dollar.

The EURUSD has been in a strong bearish trend lately. The sell-off accelerated on Wednesday after the hawkish statement by the Fed. It is trading at 1.1165, which is the lowest it has been in months. As a result, the pair is along the lower line of the Bollinger Bands. It has also moved below the 25-day and 50-day moving averages while the Relative Strength Index (RSI) has dropped to the oversold level. Therefore, while the overall trend is bearish, there is a likelihood that the price will have a relief rally during the American session. 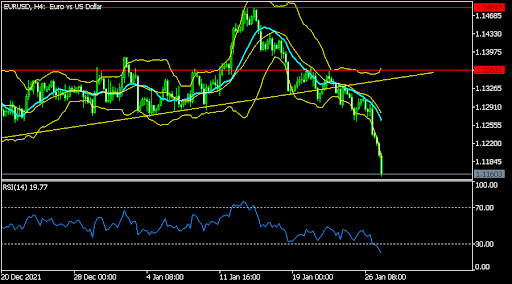 The XAUUSD pair declined sharply as investors reflected on the Fed decision. It moved to a low of 1,810, which was the lowest level since January 20th. The pair managed to move below the ascending channel shown in red. It also dropped below the 50% Fibonacci retracement level and the 25-day moving averages. Therefore, the pair will likely keep falling as bears target the next key support at 1,800. 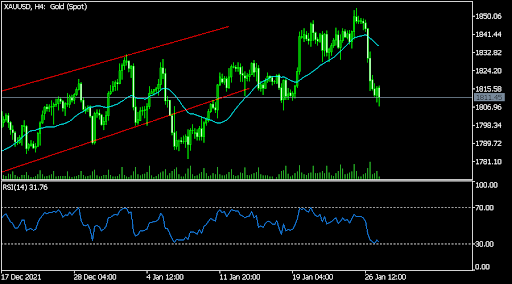 The USDAR pair declined sharply as investors reflected on the Fed and South African central bank decision. SARB decided to hike interest rates again by 25 basis points. The pair is trading at 15.25, which is slightly below this week’s high of 15.43. It is below the 25-day moving averages. The Relative Strength Index (RSI) has moved to 50. Therefore, the pair will likely remain in this range as investors reflect on the hawkish Fed and SARB. 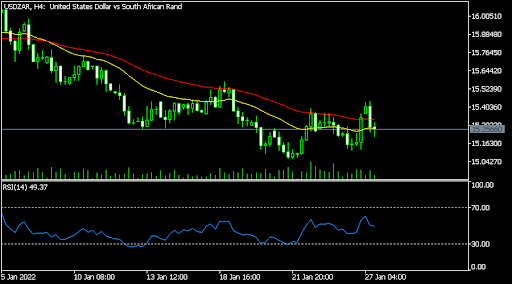