The euro rose against the US dollar after the latest European Central Bank decision. As was widely expected, the bank left interest rates and quantitative easing unchanged. It also boosted the Eurozone GDP forecast because of the ongoing reopening and the vaccinations effort made by the governments. Barring another outbreak, analysts expect that the bank will start talking about tapering in the next three months. Tapering is when the bank starts lowering the amount of its bond purchases. Earlier on, data from Europe showed that the Norwegian inflation declined from 3.0% in April to 2.7% in May while in Sweden, it fell from 2.2% to 1.8%.

The US dollar rose slightly after the latest inflation and initial jobless claims numbers. The data showed that the headline consumer price index (CPI) rose from 4.2% in April to 5% in April. Core CPI that excludes the volatile food and energy products rose from 3.0% to 3.8%. Further, the number of Americans applying for initial jobless claims declined from 385,000 in the previous week to 376,000. The continuing claims fell to 3.6 million. Combined, the inflation and labour market data show that the Fed will likely start moving earlier than expected. In the previous statements, the Fed has said that it believes that the strength is transitory.

The bitcoin price rose today even as calls for regulations in the United States grew louder. In a statement yesterday, Elizabeth Warren, the Senator for Massachusetts said that Congress and other regulators should work hard and bring tougher regulations to the space. This happened after it emerged that JGB, the biggest meatpacker in the United States paid $11 million to Russian hackers last week. In May, Colonial Pipeline also paid $4 million to hackers and experts expect that more ransomware attacks are on the way.

The BTCUSD pair rose to 37,767, which was substantially higher than this week’s low of 30,915. On the four-hour chart, the pair moved above the descending pink trendline and above the 25-day and 15-day moving averages. It also rose above the 23.6% Fibonacci retracement level while the Relative Strength Index (RSI) has risen to 63. Still, with volume falling, there is a possibility that the pair will resume the bearish trend soon. 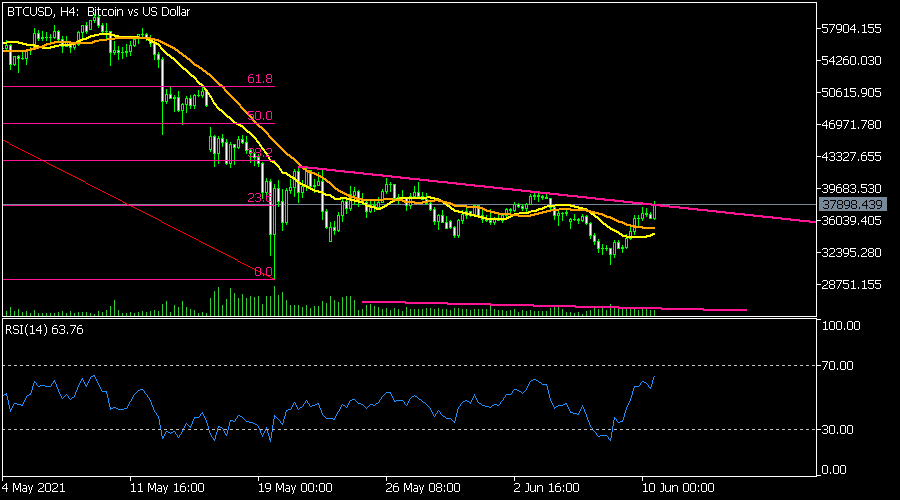 The EURUSD pair retreated after the latest ECB decision. On the four-hour chart, the pair moved below the upper line of the descending channel. It also formed an evening star candlestick pattern that is usually a bearish sign. The price has also crossed the 25-day moving averages. Therefore, the pair will likely continue retreating as bears target the next support at 1.2100.

The GBPUSD pair retreated after reports emerged that the Boris Johnson administration was considering slowing the reopening schedule in England as the number of coronavirus cases rose. The pair fell to 1.4073, which was the lowest level since May 14. It also moved below the important support at 1.4085 and the 25-day and 15-day moving averages. The pair also seems to be forming a head and shoulders pattern, meaning that it will likely break out lower.

EUR/USD has dropped to around 1.2150 after the ECB prolonged its high pace of bond buys. The dollar is advancing after US CPI hit 5% YoY in May, beating estimates.