Nonfarm Payrolls in the US was the event of the week and it did not disappoint.

The USD/JPY was poised for gains on Friday morning at 110.11 in New York before the NFP release at 8:30 am. 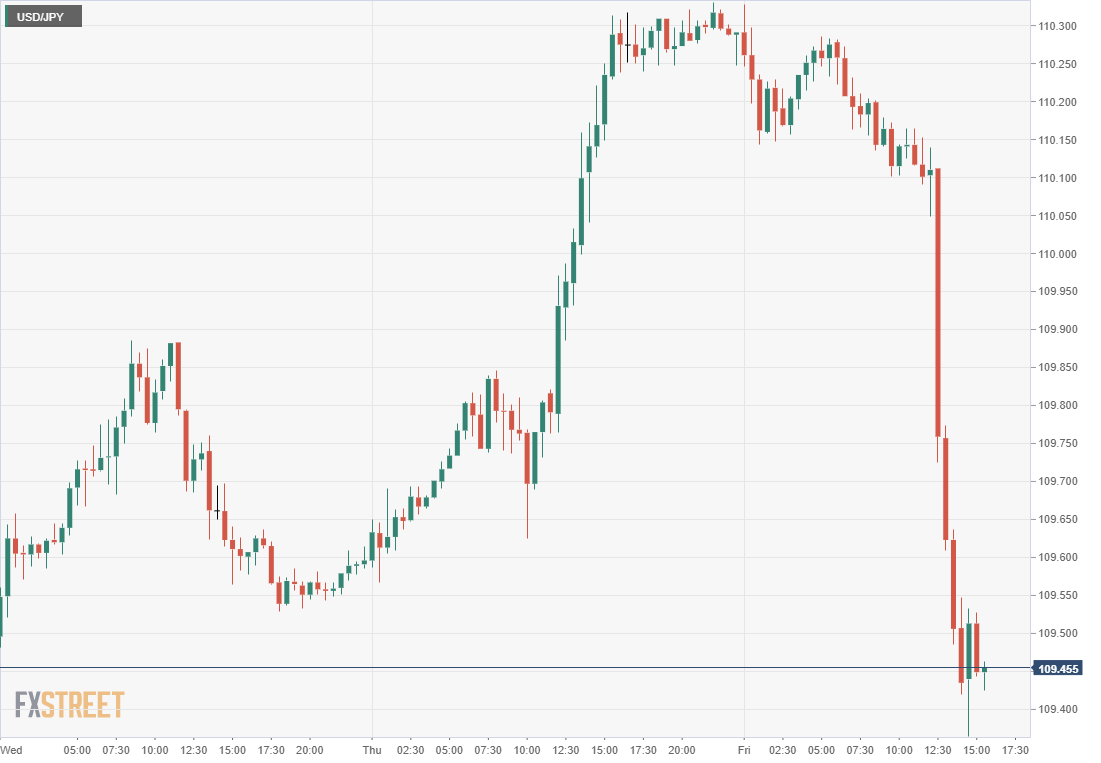 The problem for the US dollar was not that the May payroll was poor, but that combined with the April disaster, the improvement is clearly inadequate for even the most tentative change in Fed policy.

April and May Nonfarm Payrolls (NFP) have seriously undermined the expectation for rapid employment gains in the US labor market. Job creation, or at least job filling, is moving much slower than anticipated.

New hires in the last two months have been about half of expectations, 837,000 vs 1.628 million. That contrasts with results from February and March with 829,000 forecast and 1.32 million delivered.

Inflation in the US has been pushing market speculation toward the idea that the Fed will be forced to consider tapering its bond purchases.

That notion is mistaken. Weaker labor markets will keep the Fed on hold at least through the end of the second quarter because its policy is explicitly tied to job creation.

The Fed's insistence on labor market primacy and its adoption of inflation-averaging last fall, means the FOMC needs the permission of payrolls to move on rates.

The governors certainly did not get the ok this month.

In the context of the pandemic lockdowns and more than eight million unfilled positions in March according to the Job Opening and Turnover Survey (JOLTS), the last two NFP reports are highly unusual.

The US economy is expanding at a breakneck pace, 10.3% according to the Atlanta Fed. Help wanted signs are everywhere, but many workers seem reluctant to return to employment.

When the Biden administration supplemented and extended federal jobless benefits it probably did not expect that workers would use the income to delay their return to employment, but that appears to be what has happened.

Though the payroll reports for April and May have been disappointing, they have not changed the overall direction of the US economy, nor are they weak enough to prompt additional action by the Fed.

Employers are being forced to offer higher wages to attract workers. If that continues, the resulting wage pressures would be the first and most lasting step toward changing inflation expectations. When rising wages are joined with the base effect on CPI and the carry-through from commodity price hikes and product shortages, there is an increasing possibility that the underlying inflation rate will be affected.

A change in inflation expectation is the Fed’s chief concern, but its emphasis on employment has effectively boxed policymakers from a response until the labor market has returned to pre-pandemic levels.

For the moment the NFP report signals a delay for the US economy, Fed policy and the dollar. Economic developments in the US will continue to be the rationale for movement in the USD/JPY.

Housing Starts in April were up 7.1% over last April. It was the best performance since March 2019, though only the second positive month after 20 straight declines. Consumer Confidence from the Cabinet office continues to languish, coming in at 34.1 for May, down from 34.7 in April and the second fall in a row. Overall Household Spending rose 13% in April, double its 6.2% March gain and the largest single jump in over a decade.

Though the NFP report dominated price movement several other important economic figures were issued in the US.

Purchasing Managers’ Indexes (PMI) from the Institute for Supply Management for May in services and manufacturing showed business sentiment at very high levels. The sole exceptions were the two Employment Indexes. The manufacturing report fell to 50.9 from 55.1 and the services index fell to 55.3 from 58.8. For two months the employment indexes have accurately prefigured the payroll report.

Private payrolls from ADP listed 978,000 new employees but like in April failed to predict the NFP result. Initial Jobless Claims dropped to 385,000 below 400,000 for the first time in 15 months.

May payrolls brought the USD/JPY back into its range of the last three months. Anticipation for a higher USD/JPY was based on the notion that  US interest rates would rise with a rapidly improving US economy.  Payrolls have, at least temporarily, killed that idea.

It does not matter what inflation in the US does over the next half year. The Fed has tied its policy securely to a full recovery in the job market.

Treasury rates have been stalled for three months. Until there is a sustained expansion in hiring so that the Fed can claim the pandemic losses have been made good, there will be no more serious suggestions that a taper is nearing for the bond program.

For the USD/JPY that means the main speculative engine for its rise has been turned off. 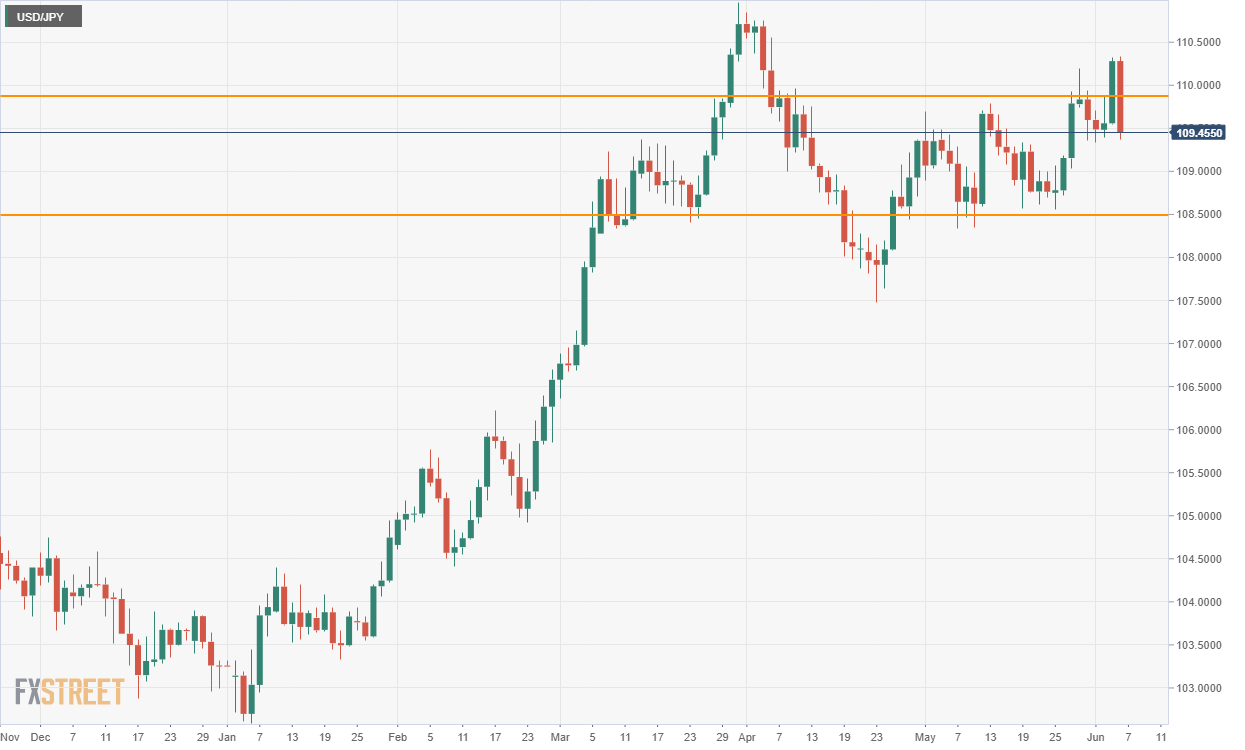 For the coming week, the USD/JPY should head to the middle of that range around 109.25.

The USD/JPY has entered a period of diminished expectations. 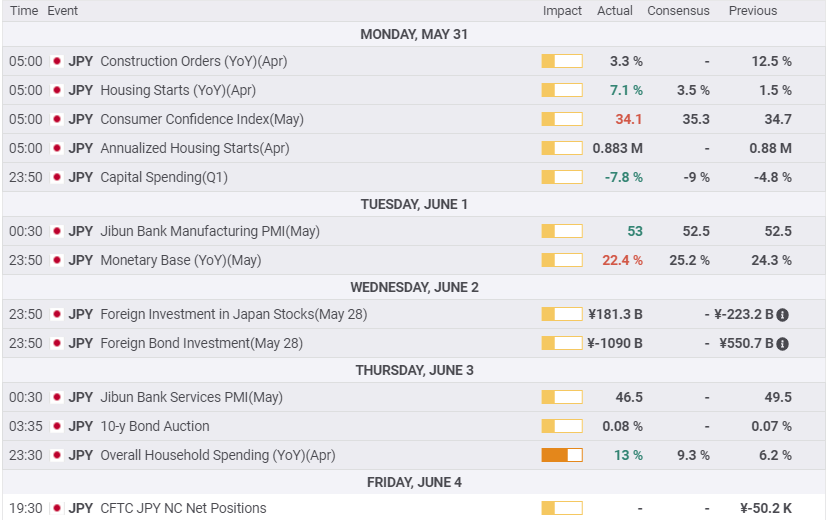 US statistics May 31–June 4 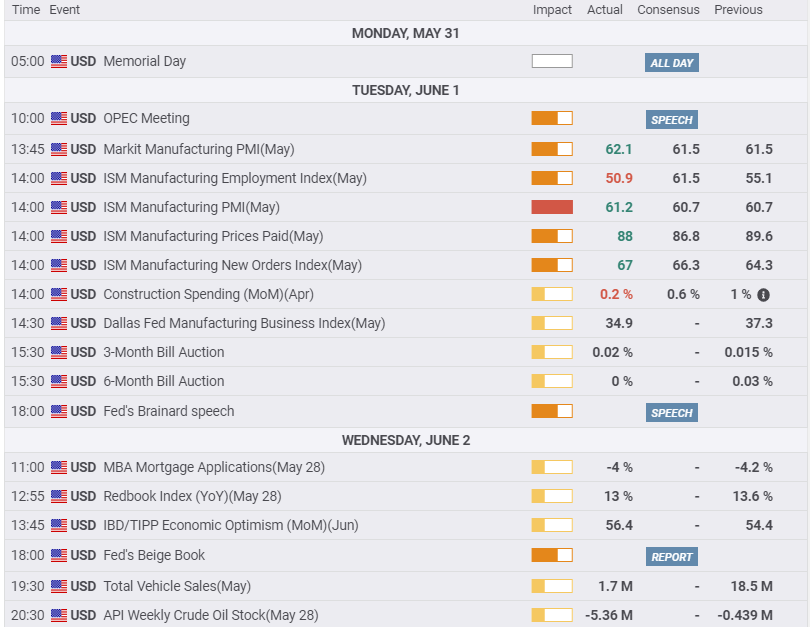 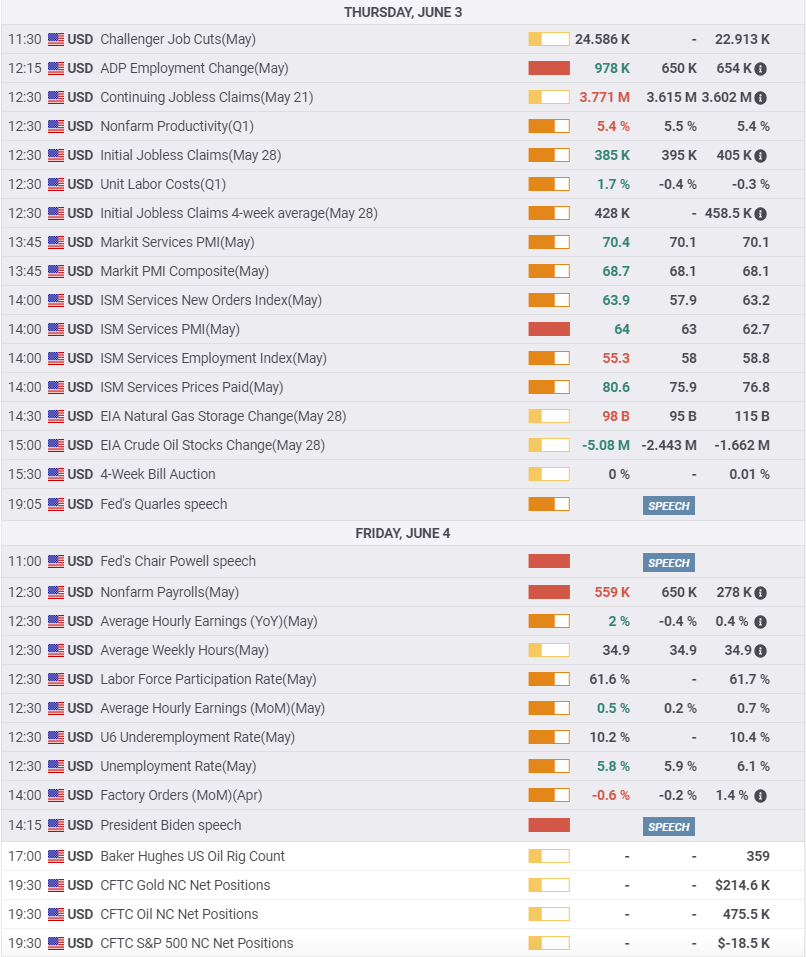 The first look at May data arrives with the Eco Watchers Survey followed by the Producer Price Index and Machine Tool Orders. The revision to first-quarter GDP is not expected to change to its contraction. April's Labor Cash Earnings will give an indication of the health of the consumer economy. The 0.2% gain in March was the first increase in 11 months. 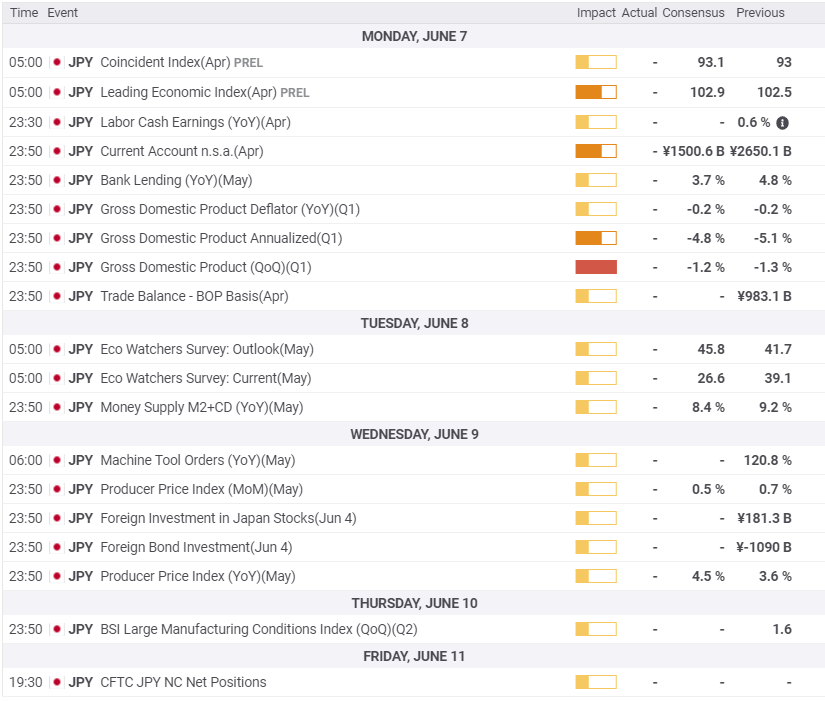 Consumer prices on Thursday are the main event. The May annual rate is forecast at 4.6% and this will again excite speculation that the Fed will be forced to tighten rates. The governors are very unlikely to do so for reasons stated above, but that will not prevent modest dollar support if the pace is stronger than expected. 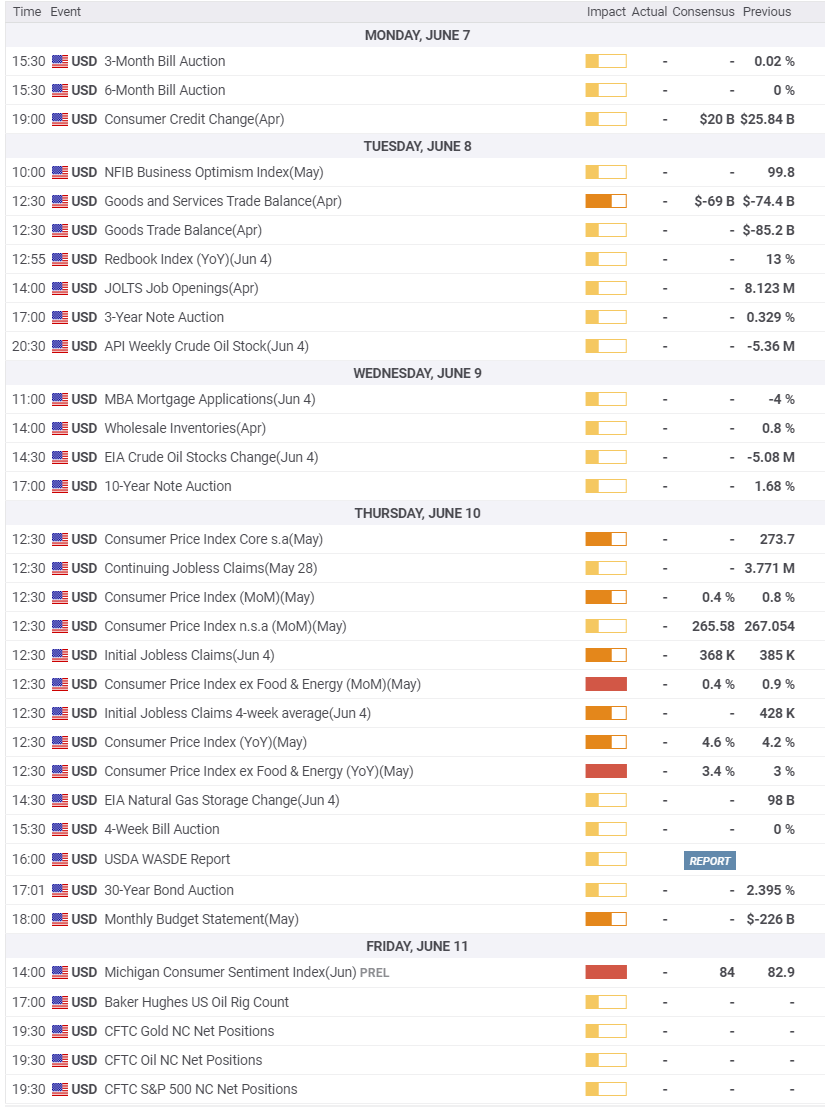 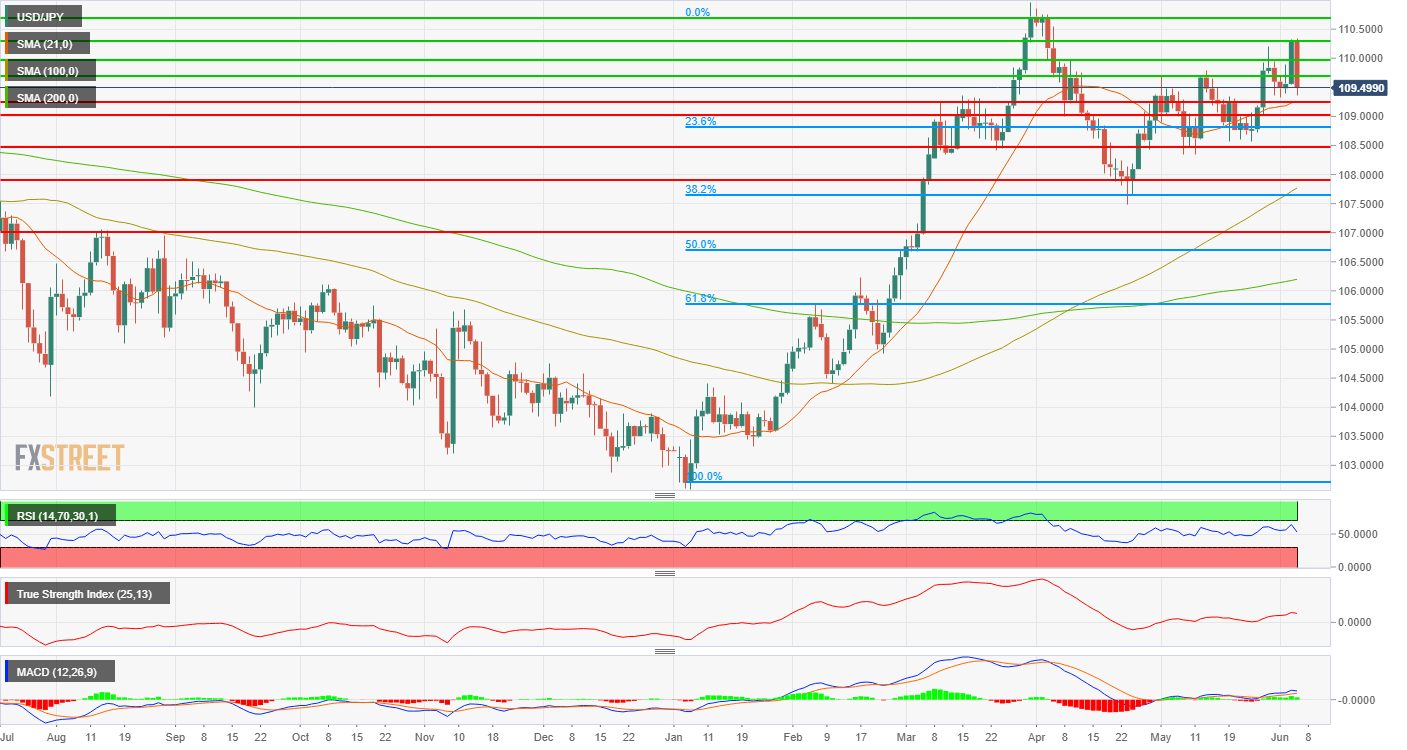 Traders should reduce their expectations for appreciable movement in the USD/JPY.  The defeat of the move above 110.00 by the weak may US payrolls has left the pair without a fundamental rationale for movement.

The technical restraints of the range between 108.50 and 110.00 should order trading in the week and weeks ahead. Momentum indicators have largely turned neutral with Friday's nearly one figure drop. The MACD retains a slight buying edge from the size of the Friday decline. The 21-day moving average (MA) at 109.25 supplements the first support line. The 100-day MA at 107.77 will operate in conjunction with support at 107.95 if the line at 108.50 is broken.

The FXStreet Forecast Poll  bullish view out to the quarter is really a picture of consolidation within the upper reaches of the recent range. The USD/JPY is trendless after US payrolls.