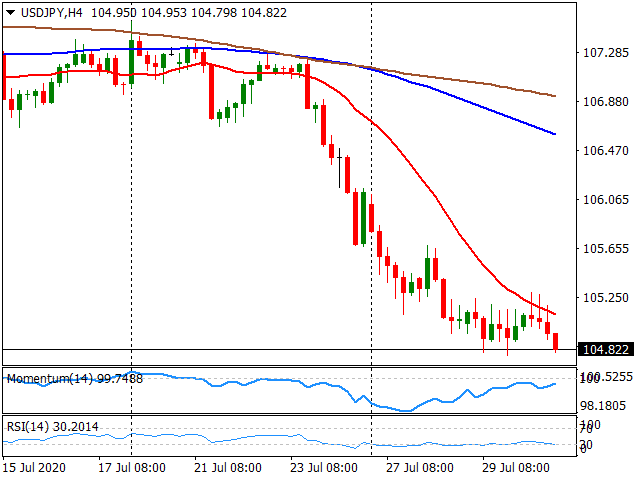 The USD/JPY pair gained traction during the Asian session on Thursday and advanced to 105.30, but pared its daily gains to settle below 105.00. The renewed selling pressure surrounding the greenback and the risk-off market environment in the second half of the day forced the pair to turn south.

Earlier in the day, the data from Japan showed that Retail Trade surged by 13.1% on a monthly basis in June and surpassed the market expectation for an increase of 7.1% by a wide margin. Nevertheless, market participants largely ignored this data.

In the early American session, the US Bureau of Economic Analysis' first estimate revealed that the real Gross Domestic Product (GDP) in the US shrunk by 32.9% on a yearly basis in the second quarter. Although this reading came in slightly better than analysts' estimate for a contraction of 34.1%, it ramped up the demand for safe-haven US Treasury bonds and caused their yields to fall sharply. With the 10-year US T-bond yield losing nearly 6% and falling to its lowest level since late April at  0.54%, the USD weakened against its peers.

The USD/JPY pair extended its losing streak into the sixth straight day on Thursday. On the daily chart, the RSI stays in the oversold area below 30 for the fourth straight day. However, the RSI on the 4-hour chart is staying near 35, suggesting that the pair could continue to push lower before staging a technical correction. On the same chart, the 20 SMA aligns as a dynamic resistance at 105.15.