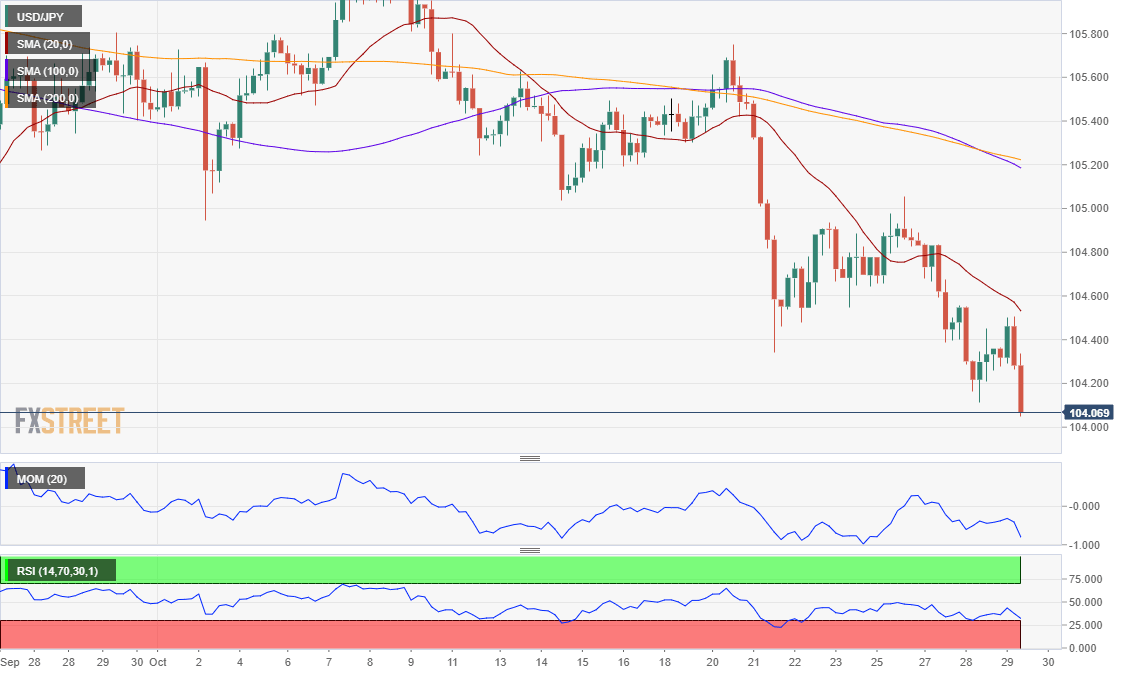 The risk-off mood persists across the FX board, although major pairs are less volatile than on Wednesday, waiting for first-tier events. The USD/JPY pair is trading near the 104.00 figure, after hitting a daily high at 104.50 during the Asian session. The Japanese currency came under selling pressure after the Bank of Japan announced the outcome of its latest meeting.

As widely anticipated, policymakers left rates unchanged at -0.1% and will continue to buy JGBs to keep 10-year yields at around 0%. Also as expected, policymakers trimmed growth and inflation forecasts for the current fiscal year, although at the same time said they expect a stronger bounce next year. As it happens with other central banks, they also warned the outlook is highly uncertain and dependent on the pandemic developments. The country released September Retail Trade, which fell 8.7% YoY, worse than anticipated, and the October Consumer Confidence Index that improved to 33.6 from 32.7.

The focus now shifts to the US Q3 Gross Domestic Product, with the annualized figure seen improving from -31.4% to 31%, a record bounce. At the same time, the European Central Bank will announce its latest decision on monetary policy.

The USD/JPY pair is pressuring the weekly low, retaining its bearish bias in the near-term. The 4-hour chart shows that the 20 SMA is accelerating its decline near the mentioned weekly low and well below the larger ones, which also head south. Technical indicators maintain their downward slopes within negative levels, approaching oversold readings. The pair needs to clear 103.99, September low, to extend its slide further during the upcoming sessions.

EUR/USD remains on the back foot, receding taking rounds to 1.2120-25, amid a sluggish Asian session trading on Wednesday. Sellers to keep reins as unless prices cross three-week-old resistance line. Easing bullish bias of MACD adds to the downside signals.

GBP/USD: Bears in control, cling to multi-day support near 1.4080

The GBP/USD pair started the session on Wednesday on a lower note. The pair recovered from the low of 1.4034 on Tuesday to close near the 1.4080 mark, where it waivers now. Momentum oscillator hints at downside momentum.

EUR/USD remains on the back foot, receding taking rounds to 1.2120-25, amid a sluggish Asian session trading on Wednesday. Sellers to keep reins as unless prices cross three-week-old resistance line. Easing bullish bias of MACD adds to the downside signals.

These three cryptocurrencies look primed to test the May lows

XLM impulsiveness on bounces has been null since the beginning of June. LTC locked in a symmetrical triangle below the union of the 200-day SMA with the anchored VWAP. CHZ faces a quadfecta of resistance that may require a revolution to defeat.

US stocks are slightly softer heading into the FOMC as the stimulus boost wanes, inflation fears grow, and the economic recovery shows signs of softening.  A wrath of US economic data delivered a somewhat mixed picture for Fed policy.