The USD/CAD returned to its best level in a month as markets anticipate the Federal Reserve will confirm that a bond taper is planned this year and the close Canadian election is not expected to produce any major policy shift, whatever its political result.

Dollar/Canada closed at 1.2763, its best level since August 19. The USD/CAD has seen a steady if uneven rise since reaching its early June low at 1.2029. 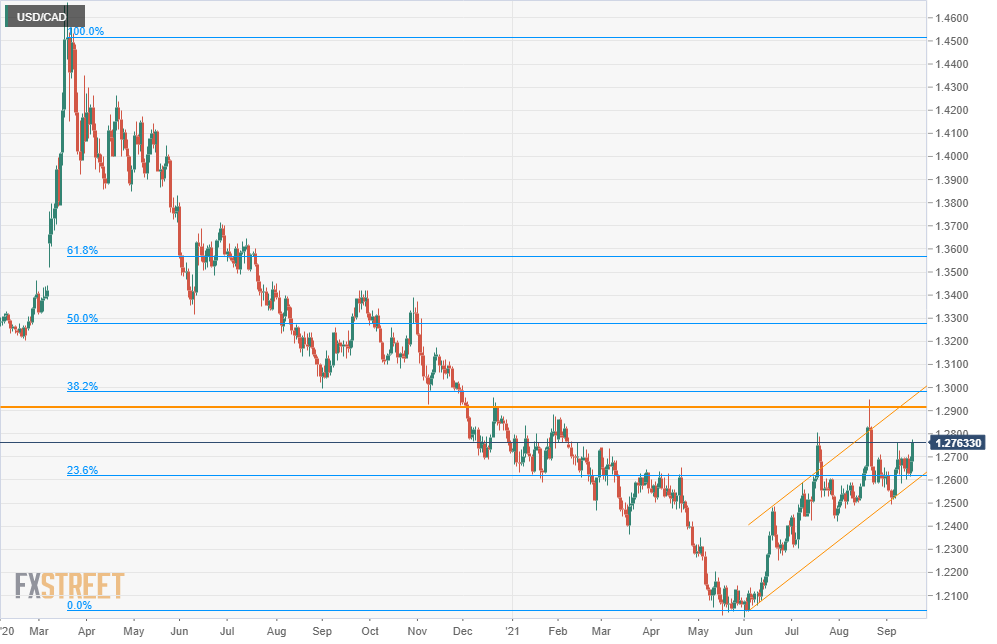 The decline in the loonie came despite a 3.4% gain in West Texas Intermediate (WTI), which finished at $71.79, its highest finish since July 30.

Treasury rates in the US headed higher with the 10-year yield adding a modest 4 basis points but matching the highest return since July 14.

Meeting for the last time in the third quarter on Wednesday, the Federal Open Market Committee (FOMC), the policy board of the US central bank, will likely give a second approval for its promised bond purchase program taper, without specifying a start date or amount. August’s Nonfarm Payrolls, which missed the consensus forecast by more than half-a-million, should induce caution in the governors, even though it followed two months with one million new jobs each.

At the late August Fed symposium in Jackson Hole, Wyoming, Chair Jerome Powell noted that there was a very good chance that the bond program reduction, the much anticipated taper, would begin before the end of the year. There are two more Fed meetings this year, November 2 and December 15, and there is no pressing need to promulgate the details of a policy change that will not, for all practical effects, take place until 2022.

That promise of higher US interest rates has been the main support for the US dollar over the past month.

Canadian inflation was slightly higher in August than expected though the Bank of Canada core rate was a bit lower than forecast, though it increased over July.

In the US, the Consumer Price Index for August showed the first indication that price increases may be slackening. Retail Sales in August rebounded smartly from their decline the month before.

Polls for Canada’s federal election on Monday between Prime Minister Justin Trudeau’s Liberals and the Conservatives of Erin O’Toole show neither party winning an outright majority in the 338-seat parliament.

Markets are ignoring the Canadian election. The evolution of Fed policy is of far greater import for the US and Canadian dollars than who resides at 24 Sussex, the official residence of the Prime Minister.

Mr. Powell has already set policy for the rest of the year. The Fed will reduce its bond purchases, all that is wanted is the implementation date and schedule. That expectation is behind the greenback’s recent ascent.

Unless Mr. Powell goes back on this promise, the details of the taper, whether at this FOMC or the next two, are all that matters. Treasury rates in the US are headed higher, and they will take the greenback with them. Markets await the signal.

The Fed’s third set of economic predictions for this year are also due on Wednesday. The GDP, inflation and fed funds projections are indicative of Fed thinking. June's Projection Materials were stronger in all three estimates. Any changes here, higher or lower, will be of immediate market impact with imporvement tending to support the US currency.

The Federal Reserve is expected to maintain its policy stance that a reduction in bond purchases and hence higher US interest rates are coming. That incipient shift gives the USD/CAD pronounced upward bias.

Economic data from the two countries, even a national election in Canada, except as it affects Fed policy, is of less importance than the decision of the US central bank.

The climbing channel that began with the June low at 1.2029 remains the dominant motif. Purchase advice is evident in the momentum indicators. The MACD (Moving Average Convergence Divergence) became positive two week ago and has maintained its purchase signal despite the up and down of daily movement. The Relative Strength Index (RSI) has moved to its highest point in a month and True Range saw a substantial rise this week.

The technical pessimism of the FXStreet Forecast Poll is likely to be overwhelmed by the pending fundamental shift of US monetary policy.