The Canadian dollar has had the best half-year among the majors, still a loser but down the least of all the major currencies, and especially of the commodity pairs. The loonie was aided by a 42% rise in West Texas Intermediate (WTI) from January which helped blunt the US dollar's safety-surge after the Russian invasion of Ukraine at the end of February.

For the past three weeks it has been a straight US dollar run. The USD/CAD has climbed 2.9% since June 7 as six-month and quarterly repositioning has favored the greenback and a 9.7% drop in WTI crippled the Canadian currency. 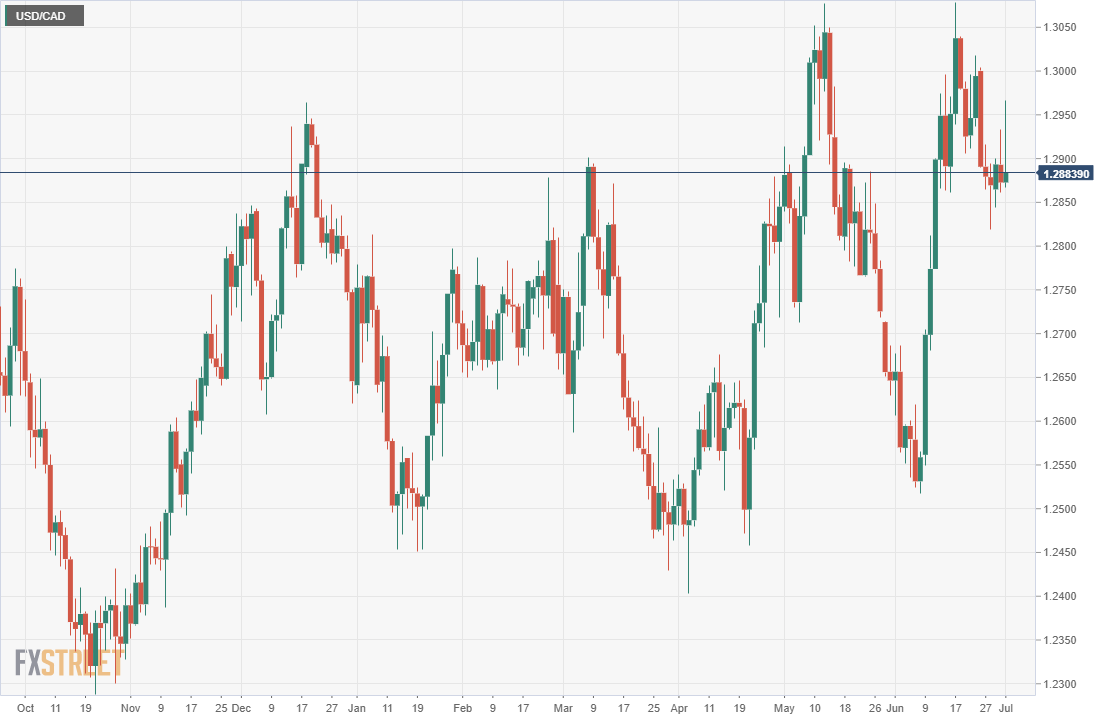 The Federal Reserve’s pivot on inflation and the subsequent rise in US rates has assisted the US dollar, but less so than against other currencies because Canadian sovereign rates have also moved rapidly higher. Canada’s inflation rate reached 7.7% in May, less than the 8.6% south of the border but more than enough to keep speculation alive for a 75 basis or 100 point hike at the Bank of Canada’s (BoC) next meeting on July 13.

Federal Reserve officials continued their rhetorical flourishes against inflation. Appearing at an ECB forum with the Bank of England’s Andrew Bailey and Christine Lagarde head of the host bank, Fed chair Jerome Powell insisted that higher inflation will not be allowed to become endemic.

Canadian data was almost nonexistent this week with just April GDP reported as expected at 0.3% to no notice whatsoever.

Data from the US suggested that the economy is rapidly weakening while inflation remains untamed.

The Personal Consumption Expenditures Price Index (PCE), the Federal Reserve's chosen inflation gauge rose 6.3% for the year in May, close to its 40-year top of 6.6% from March. The core rate slipped to 4.7% from 4.9% as expected.

Real Personal Income and Spending, adjusted for prices, were both negative in May. The Purchasing Managers Index (PMI) for manufacturing from the Institute for Supply Management (ISM) slipped to 53 in June, from 56.1 prior and missed its 54.9 forecast. The indexes for Employment and New Orders dropped below 50 into contraction, with new business at its lowest level since March 2020 at the height of the pandemic lockdown.

The Atlanta Fed’s widely followed GDPNow model rated second quarter growth at -1%, its first contraction, bringing the possibility of a first-half recession dramatically to life. First quarter annualized GDP was revised to -1.6% from -1.5%.

The 1.2500 to 1.3000 range of the last six months is not in danger. Fed and BoC policy are very close in intent and execution. Crude oil has stabilized in the $105-$115 area and while a prolonged move up or down is the most likely catalyst for a break-out in the USD/CAD the commodity market logic is lacking.

A recession in the US acting as a leader for the global economy would cut demand and prices would follow. The negative impact of lower oil on Canada’s economy and the loonie would be balanced by a probable fall in US Treasury rates. The differential for the USD/CAD would depend on the competing attitudes of the BoC and the Fed which is unknown as neither bank has publicly addressed the policy implication of a domestic recession.

American information will again dominate market results, led by the minutes of the June 15 Federal Open Market Committee (FOMC) meeting and Nonfarm Payrolls for June on Friday. The governors’ thinking on a US recession is the chief interest in the minutes. How will Fed policy evolve if the US does strike a recession in the second quarter. Services PMI will be examined for confirmation of the steep drop in manufacturing New Orders Index. If new business in the far larger service sector follows manufacturing into contraction, the odds of a recession rise and so will the pressure on US Treasury rates.

Canada’s Net Change in Employment will accompany the NFP release. S&P Global Manufacturing and the Ivey PMIs for June will provide information but no market notice.

The outlook for the USD/CAD is neutral as recession fears chip away at WTI and US Treasury rates.

The MACD (Moving Average Convergence Divergence) cross of the signal line on Thursday has not widened into a clear sell signal. Likewise the Relative Strength Index location near the neutral line evinces no plain advice. Average True Range (ATR) volatility has been declining for two weeks.

The FXStreet Forecast Poll  portrays a stronger Canadian dollar but in reality the USD/CAD is simply headed to the center of its range.