The USD/CAD pair witnessed some heavy selling on Thursday and tumbled to two-week lows amid a broad-based US dollar weakness. The Canadian dollar remained well supported by the fact that the Bank of Canada on Wednesday hinted to taper its asset purchases as policymakers gain confidence in the strength of the economic recovery. Apart from this, a modest uptick in crude oil prices provided an additional boost to the commodity-linked loonie. In fact, WTI futures climbed 2.5% on Thursday amid optimism over the extension of production cuts by major oil producers and hopes for a recovery in the global fuel demand.

The pair was further pressured by some follow-through US dollar selling. Wednesday's mixed US consumer inflation figures eased market concerns about runaway inflation. Apart from this, the successful conclusion of auctions for ten-year and 30-year US government bonds boosted investors sentiment, which, in turn, undermined the safe-haven greenback. The global risk sentiment got an additional boost after US President Joe Biden signed a much-awaited $1.9 trillion stimulus bill into law. The combination of factors dragged the pair lower for the third consecutive session and confirmed a bearish break below a two-week-old trading range.

That said, a modest pickup in the US Treasury bond yields helped revive the USD demand and assisted the pair to regain some traction during the Asian session on Friday. The pair has now recovered a part of the overnight losses as market participants now look forward to Canadian monthly jobs for a fresh impetus. Given that the BoC on Wednesday chose to highlight the weakness in the labour market, Friday's employment details will offer clues about the central bank's policy outlook and play a key role in influencing the Canadian dollar in the near-term. From the US, the release of the February Producer Price Index and the preliminary estimate of the Michigan Consumer Sentiment Index for March might also contribute to produce some trading opportunities.

From a technical perspective, the overnight bearish break through a short-term trading range supports prospects for a further decline. However, the emergence of some dip-buying ahead of the key 1.2500 psychological mark warrants some caution for aggressive bearish traders. Hence, it will be prudent to wait for sustained weakness below the mentioned level before positioning for any further depreciating move back towards multi-year lows, around the 1.2470-65 region. Some follow-through selling will set the stage for an extension of the recent/well-established downward trajectory witnessed over the past year or so.

On the flip side, the trading range support breakpoint, around the 1.2575 region now seems to act as immediate resistance. This is followed by the 1.2600 mark and the overnight swing highs, around the 1.2625 region. A convincing break through the mentioned barriers will negate any near-term bearish bias and trigger a short-covering move. The pair might then aim to reclaim the 1.2700 mark before eventually darting to challenge the 1.2740-50 heavy supply zone. The momentum could further get extended towards the 1.2800 mark, which coincides with a near three-month-old descending trend-line and should act as a key pivotal point for short-term traders. 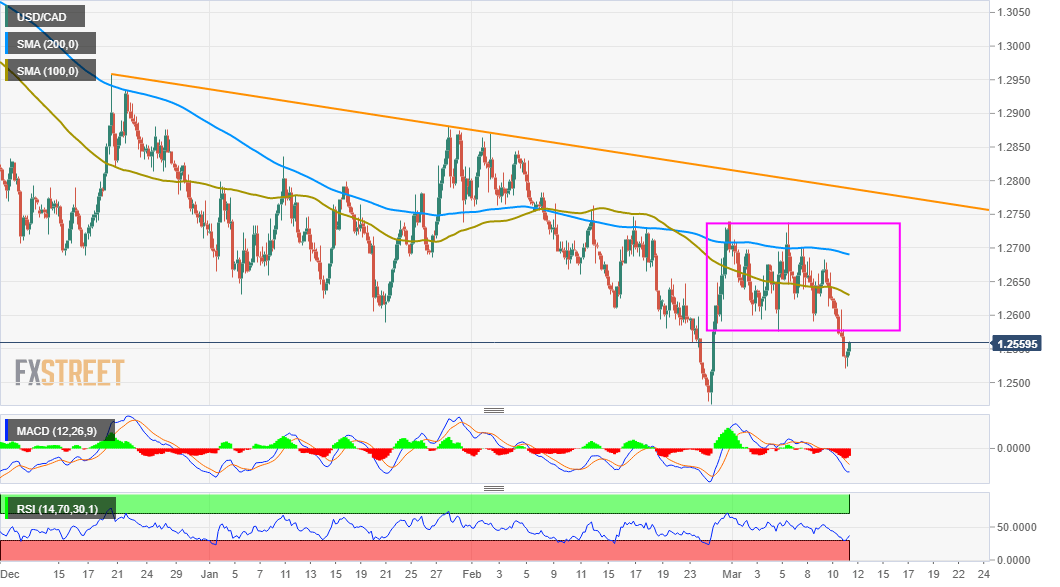