The US economic picture has resolved into one question. Can consumers keep the country’s growth afloat as inflation becomes endemic and the cost of necessities threatens to collapse the family budget? The answer is no.

Retail Sales, from the US Census Bureau, are forecast to gain 0.2% in May after climbing 0.9% in April. Sales excluding automobiles are expected to add 0.8% following April’s 0.6% increase. The Control Group category, which mimics the consumption component of the Personal Consumption Expenditures (PCE) data series, is predicted to increase 1.5% after April added 1.0%.

Over the six months to April Retail Sales have averaged 0.95%. That is a strong record and comparative to the best periods of the last decade. The problem for US economic growth is that sales figures are uncorrected for price increases. In the same half year, the Consumer Price Index (CPI) rose 0.70% each month. While sales and CPI do not track the same items, and are not directly comparable, it is evident that the bulk of the gains in Retails Sales are simply rising prices.

The Bureau of Economic Analysis (BEA), the division of the Department of Commerce that compiles the PCE and Personal Income series, also produces inflation-adjusted, or real versions of both data sets.

For the five months to April PCE averaged 0.82%, a figure comparable to the Retail Sales results for the same months. The real, inflation corrected average is just 0.12%. That the 0.7% difference matches the CPI average for the six months to April is coincidence.

What is not a coincidence is the 85% decline in PCE when it is adjusted for inflation. Or to put it another way, US personal consumption did not rise a healthy 0.82% per month from December to April, but a miserly 0.12%. 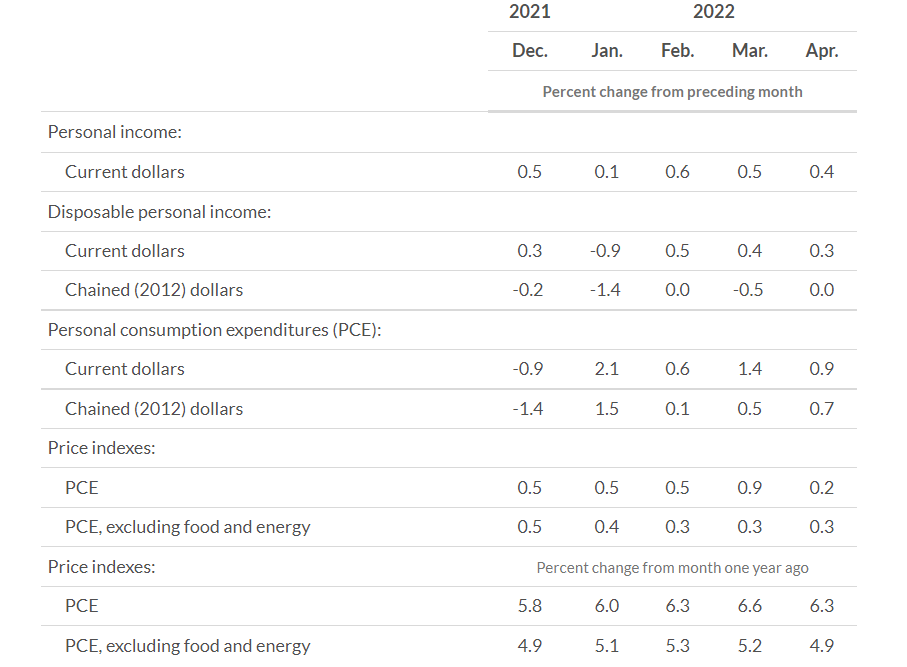 For an economy that depends on household spending for two-thirds of its activity, such a low level of growth means that any small external shock, a rise in consumer pessimism or inflation might push consumption into contraction. When the US consumer retreats, the economy follows in short order.

The US job market has remained robust, at least in job creation numbers, for more than a year. The 12 month average for Nonfarm Payroll is 547,000 and the half-year to May is only slightly less at 510,000.

As with the sales and expenditures data, the wage gains look healthy until compounded with inflation

The US Consumer Price Index averaged 6.86% for the last 12 months and 7.97% for the last six. A rough comparison has US households losing 1.66% in purchasing power over the past year and 2.65% since November.

The CPI- AHE comparison is confirmed by the BEA’s Disposable Income and Real Disposable Income series. Disposable Income averaged a 0.12% monthly increase from December to April. Real income fell 0.42% per month for the same period. For March, April and May, American households' purchasing power fell, equivalent to a cut in wages,  2.7%, 2.6% and 3.0% annually.

It is difficult to overemphasize these numbers. Americans know that they are losing to inflation every month.

Federal Reserve economists may track the core PCE Price index, stripped of food and energy costs, as more reliable for long term inflation trends, but Americans do not have that academic privilege.

The damage to family budgets is unavoidable and much greater than the 8.6% CPI rate tells because food and gasoline prices have risen even faster. In May food for home purchase was up 10.4% on the year and a gallon of regular gasoline was an astonishing 63% more expensive.

American optimism has been fading for almost a year. The Michigan Consumer Sentiment Index tumbled from 81.2 in July 2021 to 70.3 the following month and has never looked back. The surprise plunge from 58.4 in May to 50.2 in June, stability at 58.0 had been forecast, brought the long-running measure to its lowest reading on record.

The Index of Current Economic Conditions fell from 63.3 to 55.4 and the Index of Consumer Expectation dropped to 46.8 from 55.2. The three indexes are respectively 41.3%, 37.5% and 44.0% lower on the year. According to the survey, all components of the overall index fell in June with the steepest losses in the outlook for business in the year ahead, down 24% and consumers’ assessment of their personal financial situation, off 20%. Inflation was the source of their negative outlook for 46% of respondents, up from 38% in May and a share only exceeded once since 1981. 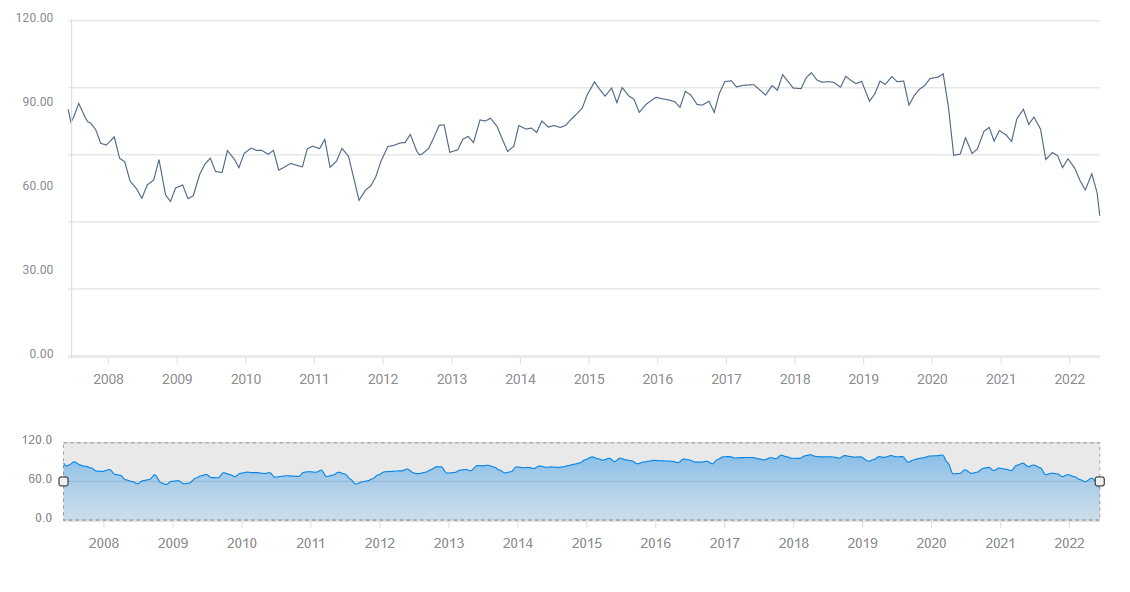 Conclusion: Retail Sales and the markets

For the markets Retail Sales are suddenly a trailing indicator.

Soaring US and global inflation, declining American purchasing power, dismal consumer sentiment and an aggressive Fed, are likely to overwhelm Retail Sales for the next several months, whatever numbers are put up for May.

If the current sales figures meet or beat their forecasts, markets will assume worse and much worse numbers are on the way. If the May results are lower than predictions–a good probability–traders will assume the recession is already here.

Two of the three major US equity averages were in bear market territory after Monday’s session. The S&P 500 was off 21.33% this year, the NASDAQ 30.91% and the Dow was down the least at 16.01%. Stocks are pricing both the rising likelihood of a recession and a more aggressive Federal Reserve tightening scheme.

The Fed raised rates half a point in June and had been expected to do so again on Wednesday. There are now indications, primarily a Wall Street Journal article on Monday afternoon, assumed to be informed by the Fed, that the governors are considering a 0.75% increase at this week’s meeting.

Fed Chair Jerome Powell in his press conference after the May 4 Federal Open Market Committee (FOMC), said that further half-point raises were likely but that the bank must be able to respond to unexpected inflation developments. May’s vault of CPI to a new 40-year high at 8.6% over the March top at 8.5% could be just that surprise.

Credit markets are convinced the Fed will move faster. The 10-year Treasury yield has added 53 basis points this month to 3.371% and the 2-year is up a remarkable 86 points to 3.404%

The dollar is drawing in buyers from all corners of the currency markets and has gained in every major pair this month. 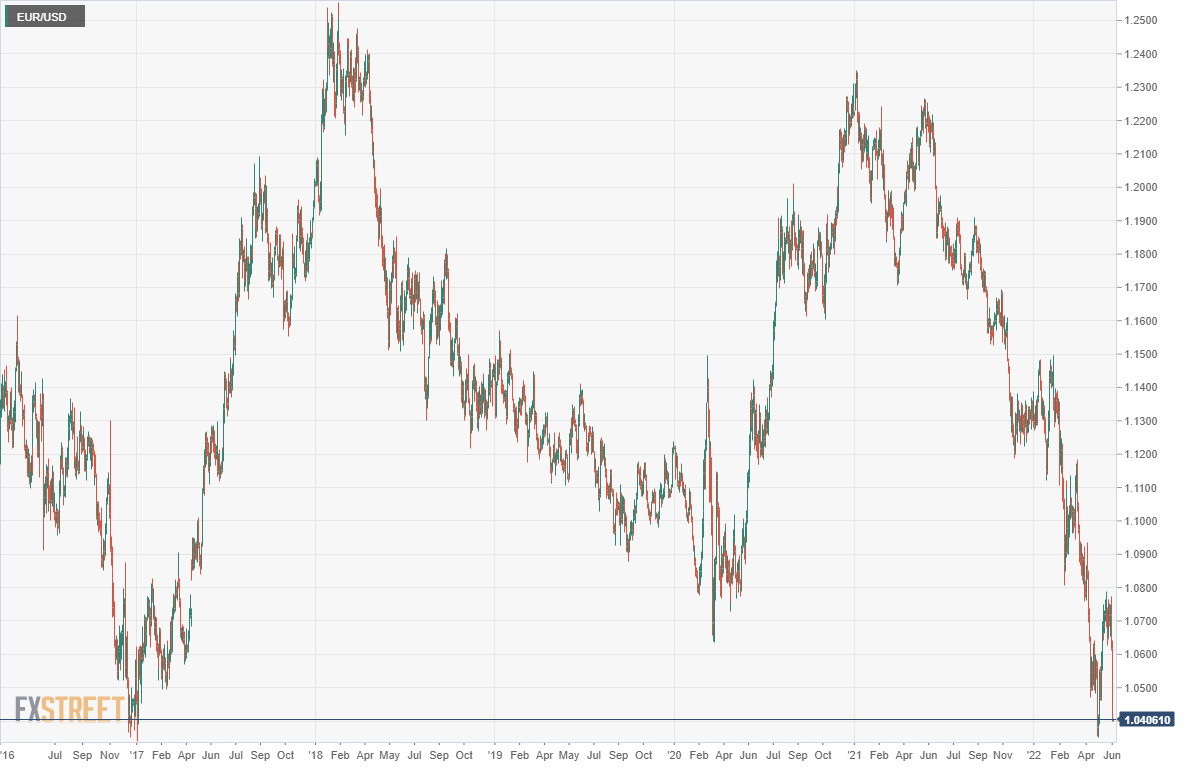 For the US economy, consumer spending and job creation have been the pillars on which all optimism has been founded. When the first cracks, the second and then the economy will follow.