The Fed’s preferred gauge of inflation, the Personal Consumption Expenditures Price Index will be released by the US Bureau of Economic Analysis on Thursday, December 23. Investors expect the Core PCE Price Index to rise to 4.5% on a yearly basis from 4.1% in October.

The result has implications for both the US dollar and gold. If it beats investors' expectations by a wide margin it will increase probabilities – currently marginally above fifty-fifty – of a March rate hike, pushing the dollar higher and having the opposite effect on gold. If substantially lower the effect will be the opposite.

Earlier in the month, the US Federal Reserve announced that it will be speeding up the pace of monthly reductions in asset purchases to $30 billion from January. Additionally, the Summary of Economic Projections revealed that policymakers expect three rate hikes in 2022. Despite the hawkish tone seen in the Fed’s policy outlook, the US Dollar Index edged lower amid a ‘buy the rumour sell the fact’ market reaction and Powell’s cautious remarks.

Commenting on the inflation outlook, the FOMC Chairman acknowledged that price increases were now broader but reiterated that they continue to expect inflation to decline closer to 2% by the end of 2022. Powell added that it would not be appropriate to hike the policy rate while the taper was still ongoing.

XAU/USD climbed above $1,800 for the first time in December in the aftermath of the FOMC meeting but lost its traction in the first half of the week with investors pricing a 52% chance of a rate hike in March, compared to 40% last week. Additionally, the benchmark 10-year US Treasury bond yield, which slumped below 1.4% on Monday, is rising toward 1.5% and limiting gold’s upside. 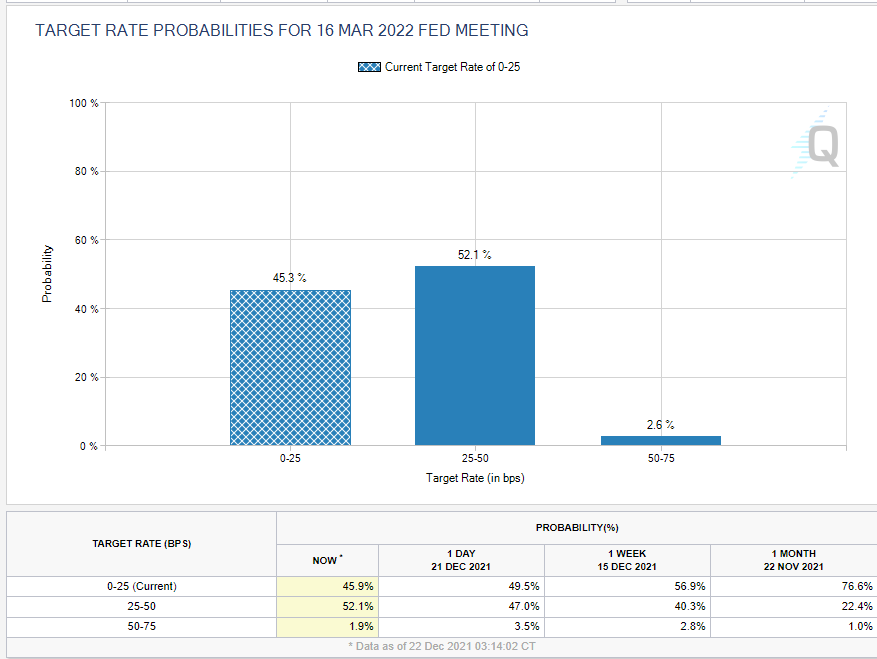 Unless it misses the market consensus by a wide margin, November PCE inflation data is unlikely to change how markets price the Fed’s policy outlook. Hence, the market reaction should remain short-lived. A stronger-than-expected print could help the US T-bond yields edge higher and as already mentioned cause gold to remain under bearish pressure. On the flip side, a soft print could open the door for another leg higher but it may not be enough to convince buyers unless XAU/USD clears key technical resistances.

The Relative Strength Index (RSI) indicator on the daily chart is moving sideways near 50, punctuating gold’s indecisiveness in the near term.